A Tale of One City, One Team & Two Heroes.

Share All sharing options for: A Tale of One City, One Team & Two Heroes. 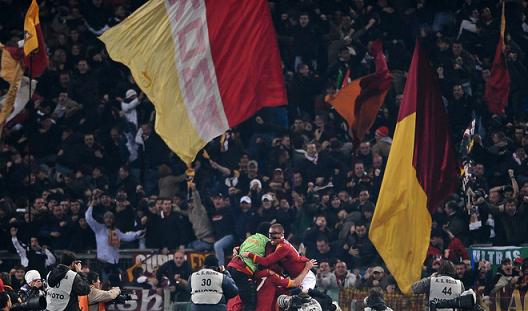 The underdog was not Lazio, but Julio Sergo Bertagnoli. Just as the out of form was Marco Cassetti.

You play this one with the heart. Without any concept of skill, ability, pace or strength. With regard for only the name on the front, disregarding those on the back. This one comes from within.

When it mattered most, when the game was on the line, Roman hearts loomed largest once again. And none loomed largest than those of Julio Sergio and Marco.

Marco Cassetti has been, for the better part of three years, one of the most underrated players in Rome - perhaps even all of Serie A. Like a few of those in his class, he's suffered through a patch of form which could be described as less than ideal. Some might even describe it as awful. The cruelest of neutrals might go so far as saying Cassetti's form made Lazio's form look that of title contenders, but we of course know that could never be true. And he seemed to confirm this by setting up that onslaught which turned Julio Sergio from a name in the history books to a name in folk lore.

But that was never his bag. He was never going to be a mistake-free defender. That he was a mistake-full one recently was equally as improbable, but it happens. What he is, what three plus years have shown him to be, was seen in microcosm by the move which sent a crooked number hurtling to that Olimpico scoreboard. He's an above average defender, experience taking him upwards to good, but never great, who will do his work at both ends of the pitch and everywhere in between. He will stop, start, continue, nurture and ultimately finish movements anywhere on the pitch he do desires. He will win the ball near the Roman right corner flag one moment and be spotted in the next up near the opposition's right, doing who knows what.

If you'd been asked to pick the likeliest of derby heroes, Cassetti would be bottom rung with Adrian Pit, Leandro Greco and the fertilizer they use on the Olimpico pitch. Not in least due to the notion that he'd be spending, or so we thought, this one in stands, rather than on the bench or, gasp, the pitch. That Claudio Ranieri noticed he'd trained well - along with the archived video of Marco Motta being torched up and down like a cheap cigar last time 'round - deserves the credit of inserting a riskier Cassetti rather than sticking with his previous strong three. From there, Marco Cassetti deserves credit for simply being that which he is: a damn good footballer.

What turns him into one of the day's heroes is his ability to put the rest of it behind. The ability to walk on the pitch as a substitute, twelfth-preferred, and render his recent form and benching a non-issue. To simply play to his strengths on the biggest stage in the biggest game in the country's biggest city. Hearts win derbies, yes, but so do grapefruits. Marco brought his, and they were bigger.

In the grand scheme of things, what Julio Sergio has done is not extraordinary. He has not overcome a debilitating injury or lifelong condition. He has not, as far we know, suffered a tremendous personal tragedy which renders football a distant mental second. He is not cumbered with the baggage of great expectation. He's not even burdened by any expectation. Everything is a bonus. Everything is a free pass.

And yet one can't help but feel some sort of emotion towards a man who has been nothing short of the silent professional for three years. Who never said a peep, largely because he was never in a position to do so, while the world just assumed he had little talent to speak of. His job, or that which he performed whilst not moonlighting on the Trigoria practice pitches, was essentially concierge to the Brazilians. When Roma spent big money on a Brazilian, he scoured the city for real estate. When a compatriot needed convincing, he put in the phone call. Julio Sergio did the dirty work.

All this while sitting behind a big-moneyed starter, also his best friend, a young phenom all too young and yet another compatriot who, we now learn, couldn't carry his jock with a wheelbarrow and a small team of the world's strongest men. He was so poorly thought of at one point a Romanian keeper fresh off surgery was brought in on loan, just for the hell of it. This bumped him down once again, all the way to fourth, which in most circles will hardly earn you a paycheck, but in Rome means you'll sit on the bench plenty, at the least. Never a word.

His rise has been awe-inspiring and breath-taking; a Disney script begging. He's been a gift, plain and simple. Perhaps, rather than shredding his contract, Luciano Spalletti's final gift to Rome. And as much as that save, that which stopped so many hearts, which dropped so many Romans to their knees, was his own doing, he deserved it. He deserved that moment and all that comes with it.

Any other day it's just another great save. This was not any other day. And he is no longer any other player. Moments create legends; derby moments create heroes. Julio Sergio is now and always will be, a Roman hero.

The rest will be celebrated, but these two deserve their moment for giving Roma its moment. Hip hip...