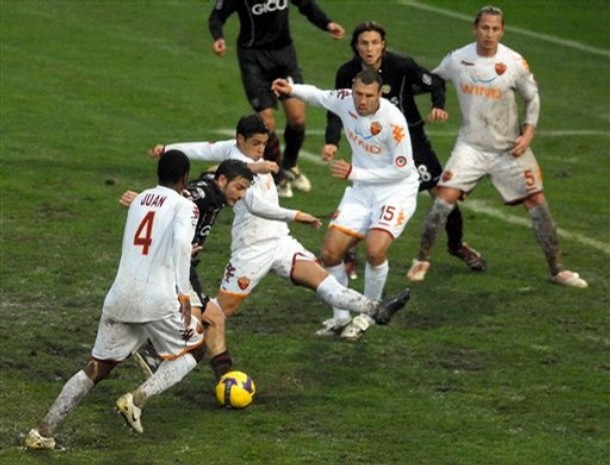 What can one do? What can one say? Injuries decimated the squad even before making the trip south, only for Mirko Vucinic to pick up an infectious disease - presumably from an acquaintance of Bernado Corradi - making it eight players* either hobbled or too cool for school. Introduce the pitch - a slab of grass everyone knows is one of the worst in topflight calcio - decides to go far above and beyond anything the lads could've imagined. Was never going to be good, but this bad? There were pockets where the ball was simply immovable, serving to remove the technique from a technical team.

The result was merely a consequence of the circumstances. Nothing more, nothing less. The gods conspired and no one, not even Nostradamus himself, could've forecast conditions this absurdly absurd.

Something with which Spalletti seems to agree:

“It is a point that has real value when it was earned in a difficult arena against a fired up opponent."

“We were just a little bit unlucky, but we accept this result. The pitch was in a terrible state and that helped Reggina, seeing as we always struggle on this kind of surface.

“We tried to play the ball to feet, then Reggina made it a more physical encounter and [Bernardo] Corradi was in his element. In any case, the side did well.”

It's that simple. Reggina did well to use the conditions and Roman injuries to their advantage but this one was beyond Roma's control.

* - Menez also had to be bandaged after coming off. Hopefully preventative, knowing Roma it could be disastrous.

Finishing aside he had a fantastic game. Actually, forget the finishing. This is a kid - and he is just that - who has been injured for the last six weeks. He should be counted upon to create chances in apocalyptic conditions with very little support behind him - in crunch time, no less - as much as David Pizarro should be counted upon at the far post on dead ball situations - and yet Stefano rose to the occasion. At times, particularly in the second half, he was the only attacker within 20 yards of the ball, continually playing far beyond his age.

Obviously playing time is at a premium and the loan is for the best, but I still look forward to each and every chance he gets. A special talent.

What will be interesting to see is whether or not he can stave off the injuries which have plagued him recently. If so, could simply be an isolated incident - but it could be fuel for the theory that the constant injuries are partially the fault of the technical staff (that's you, Luciano).

Nobody had a good game in defense, 'twas simply impossible, and an extra body in the back was the right call. The ball and pitch were too unpredictable; at any moment the ball could've squirted (see: Juan) to the waiting doorstep of a marooned attacker. However, what typically happens when you insert a player prone to enormous cockups to a game begging for precisely that.....

It's frustrating because it's Loria. Because he's done it so frequently. Because the team looks so fragile in the back when he's playing. Because when he's on the pitch Roma have a goal differential of -8.* It's impossible not to realize this could've happened to any other defender under the conditions, but this is the sort of thing we've come to expect from Simone.

* - Obviously some of that is biased towards the beginning of the year and Simone under the more defensively stable 4-3-1-2 would see his weaknesses veiled a bit more.

“I have nothing to say about Loria’s mistake,” insisted Spalletti. “At times it can happen that when you don’t play much you get a little rusty, but I am very happy with him overall.”

This just smacks of Spalletti trying to build his confidence. Yes, if he's run out on a weekly basis he'd likely show a bit less "rust", but being able to bound off the bench and bolting straight into the fray is one of the main responsibilities of a backup. Not going to be perfect, but can't aid in dropped points, either.

“We have been unable to resolve the situation, which isn’t entirely surprising as we had very few days at our disposal.”

They need him and they have no choice. Marco Motta can't do it. Souleymane Diamoutene can't do it. No one can bring to the table what Christian Panucci can today, at the snap of a finger. Cassetti down, this is the only option.

Could say they needed him today more than ever, but Simone was brought in to deal with Corradi. Panucci isn't the physical, rough 'em up and win the aerial battle type, so it's likely Loria would've been sent in Christian pouting on the pine or no.

Still, feel free to hang the dropped points on him regardless of whether or not it's based in logic - he deserves at least that much.

* - The Mexes foul was clearly not a penalty but I'm not quite sure Okaka gets the call without Corradi's. Not that it wasn't a penalty. (If that makes sense.)

Missed much of the first half and really, this was a one-off. No ratings...except David: 9.

Next weekend: Genoa six-pointer. Both for the table and a spot of revenge.