Siena: Time For Arsenal Yet?

Share All sharing options for: Siena: Time For Arsenal Yet? 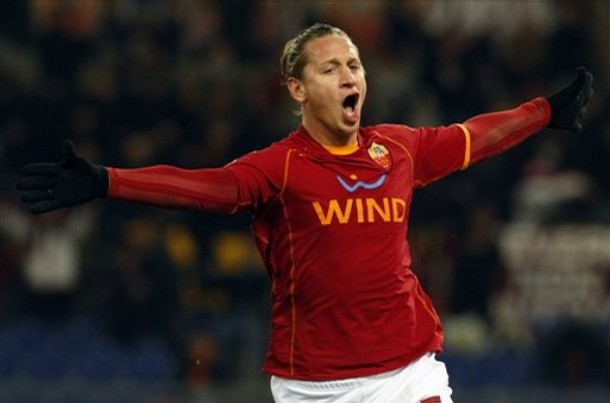 Let's be frank: that was the victorious equivalent of the fixture against Atalanta (which never happened, per my sports psychologist). A dire watch, as ugly as expected once the starting lineups were announced. Lineups so ugly and so predictable I genuinely thought about climbing back under the covers - just to hide, not to sleep.

The only players fit who could possibly provide any semblance of individual attacking brilliance were Francesco "Kinda Sorta Fit" Totti and Julio "Pass? What's That?" Baptista - neither of whom provided much of said brilliance. There was also David Pizarro but as ever with him in the lineup, when he's off, he's way off and the team wanders aimlessly behind.

The only hint of pace came from the fullbacks - all three of them. Two who were just back from moderately substantial injuries, with both finding themselves reinjured and/or incapable of breath to sustain life at some point yesterday. Also helpful. Rodrigo ran his arse off, but aside from his saving moment, played a lot less Brazilian than his Italian fullbacking counterpart on the opposite flank (at least for a half). Ugly all around, basically.

The substitutes bench looked like something I just threw up and the substitutes themselves looked a slight bit than that worse on paper (though doesn't it always) - fortunately their performances weren't as bad as the look on my face each time they lined up at the half. Souleymane Diamoutene looked like he was at a junior high dance (though to be fair, that's how he looks all the time); Filipe had some nice (and surprising) moments and displayed the patented Brazilian flair, but tactically looked like he was playing in an under-6 scrum; and, in the complete shock of the day, Vincenzo Montella looked like a man with working knees.

Under most circumstances, those are three subs - particularly with Siena looking lively on the attack - I'm sure Spalletti would rather not make in an intrasquad walkthrough, much less a Serie A game. So, considering the lineup and continuing rash of injuries, 1-0 is a positively brilliant result.

What's funny is this was, by necessity, largely the return of the 4-2-3-1, at least according to the supposed positioning of most personnel (Julio is no Simone). But rather than usher in the return of the much ballyhooed high-flying Roman attack, it provided something so many had cried for throughout its reign: the ability to grind out (f)ugly 1-0 results.

Not that you want to grind out results against bottom table teams at home, but beggers/choosers and all that.

Three men of the match for me:

Taddei: When big guns go down, someone has to step up and his goal was a desperately needed inch-perfect clinical finish. Not to mention his immense workrate in the absence of DDR & Simone.

Brighi: I hope he got the game ball. Not that he was the best performer (despite being good the next guy was better) but to ask him to replace DDR and clean up for a sloppy Pizarro while Baptista is shadowing Totti and Shaky Knees Diamoutene is making his debut in the back is just...that's about as big an ask as it gets.

All in all a good win via a sloppy performance but done so while everyone - Spalletti, the players, the fans, Rosella's milkman, etc - had an eye and a half on the Arsenal fixture. Bout the most one can ask - just don't make us do it again, please.

* - Francesco left the pitch and went straight into the locker room which has put your favorite disreputable media outlets on red alert, but he did so only so he "wouldn't get cold" and informed the bench. Spalletti said something may be done because rulez be rulez, but all's still well.

Love how there are a whopping two highlights for the first half.

Juan: Here's the skinny: his thigh/hip strain is worse than initially suspected but he's in London. What I think is.....unless his leg detaches from the hip and walks out of the hotel by itself, Juan's playing. As anemic as Arsenal's offense may be these days, there's still a reason they're in the knockouts and they still feature some sprightly attackers. They're a ball on the floor team, especially without Adebayor, and that spells disaster against Loria while Diamoutene is an unknown commodity at this stage and particularly so in a game Arsenal will want to play at pace. Juan plays.

Cicinho: Not hurt terribly, but not terribly healthy, either. I'm guessing Spalletti sees Motta as capable enough - he's probably even a defensive upgrade on Cicinho at this point (even though that's not saying a whole lot) - that Cicinho won't be rushed back if it's 50/50 or so.

Mirko: Didn't train with the team today but did some individual stuffs and though better, still not 100%. With Simone back to play treq and Julio playing fairly well up top, he'd be a loss but not catastrophic. The pieces are there to get the job done with or without.

Alberto: Maybe/maybe not. The norm.

Menez: Still hurt, left at home - hopes to be ready for Inter on Sunday. (Didn't even know The New Merda was this Sunday. How fantastic. Shall we start the post-London body count now?)

Cassetti: Still receiving deep-tissue massages. Marco and Jeremy - along with the still staunchly unapologetic Panucci - are the only ones who have been left in Rome.

The traveling squad is deep, yet in actuality they're anything but. Typical Roma. Tuesday should be positively thrilling. And by thrilling I mean unthinkably frightening.