Living To Fight Another Day, But Only Just.

Share All sharing options for: Living To Fight Another Day, But Only Just. 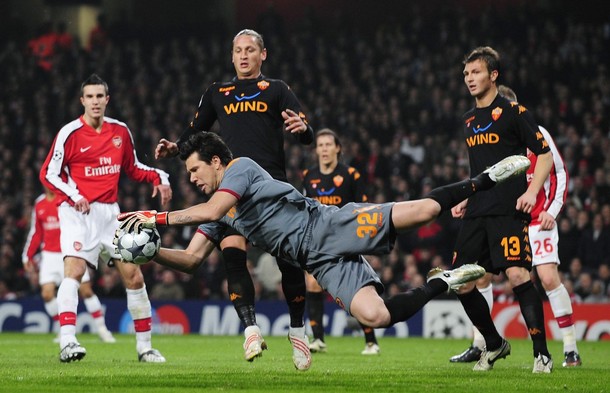 The result in itself is not upsetting - not in the least. What is upsetting, however, is the immense opportunity not only bottled but kicked, punched, smothered, shredded, defiled, deflowered and ultimately discarded in the dumpster like an incestual tryst.

Arsenal might as well have been named Red Cross on the night, because they bailed Roma out time after time after time. Their finishing was Roma's disaster control. Even the English commentators - despite having intelligence quotients just below state-defined mental retardation - noted the Gunners were begging the boys in black to tie it up. Arsenal's paralympic team could've finished better than their "senior" counterparts on the day. Not even Queen Elizabeth has service that "royal". We could go on and on and on. One-nil is not a bad away result in the first leg of a knockout campaign, but it's an epic victory when it should have been four or five, at least, to a goose egg.

Credit, however, is due to whomever convinced the Arsenal kiddies this was a World Cup final. They were lightning out of the gate and throughout the first half, the impact of their drive, pace and youthful dynamism only being accentuated when David Pizarro came on in the second half and Roma were able to slow down the tempo a touch. While not quite night and day - Arsenal still had their chances - the Roman offense finally kicked into gear. His ability to sit on the ball and dribble his way out of tight situations - basically he's the anti-Baptista - was paramount in escaping the suffocating speed with which Arsenal's defenders closed in on the ball. Arsenal played it right.

But then again, they had the pieces to play it right, despite their injuries, whereas Roma were desperately lacking one attribute so clearly. The two greatest difference makers on the day would clearly have been Mirko & Yeremy, as the team that showed up in London had precisely no pace about it whatsoever - something which was foreshadowed against Siena. Get beyond the ball? Pish. Not with the man designed to make those runs, Simone Perrotta, only making it to the half before Julio Baptista coughed up the ball more easily than a SARS patient, forcing the human pinball back on the defensive. Totti? Please. What he did with so little help was immense. Triple teamed all night with zero help whatsoever til David arrived on the pitch and the lads were finally afforded some space.

Were the tactics wrong? Probably not - ten out of ten coaches start the same lineup. The back was crippled and that, the legs of the formation, sent the rest crumbling to its knees. The Roma which can dazzle Europe with its brilliance does so because they play as a solidified team with confidence enabling them to unleash their supreme technical qualities. A Roma lacking the legs to form a solid base is merely a jagged mess, and that's precisely what we saw on Tuesday.

1-0 was a gift, and roundabout the time Arsenal missed its 487th sitter I couldn't help but think, "my god, this is just screaming the luck that teams inevitably need to make it to the title game". Surely not if the same Roma shows up in Rome, but we all know how La Magica performs in front of a booming Olimpico. Apples and oranges. Or bananas, even.

It's not often that teams are offered a second chance in elite football. The Roman leg is nothing short of a second chance, and they need to attack it with a vengeance.

Upon a very brief glance I couldn't find any of worth, and considering how dire they must be, I've decided not to look any further and implore everyone else to do the same.

Wonder how the script is coming along?