Fullback To Apologize, Fullback Goes Down, Business As Usual.

Share All sharing options for: Fullback To Apologize, Fullback Goes Down, Business As Usual. 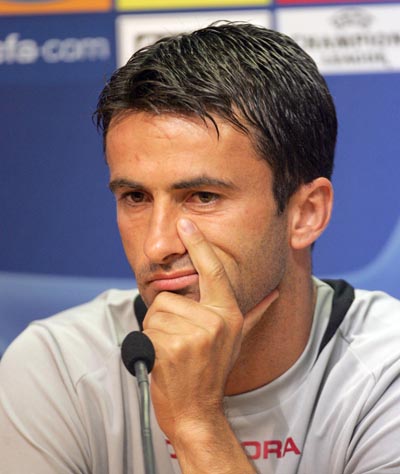 "Slowly, both parties got closer and even the declarations of the team pleased my brother. Refusing the bench and not accepting the decision of the coach is always a mistake, but I won't say more.

"Refusing the bench is a gesture he shouldn't have done, therefore it's fair that he pays for it. He made a mistake, he accepted any decision taken by the club and I think that he will make a press conference to say sorry about this situation."

I don't quite care what his brother - or his agent, for that matter - has to say. What I do care about are three things:

i. What the fuck was he thinking?
ii. Where do things stand now?
iii. Why the hell have his brother and agent been acting as his ventriloquist when this happened ten days ago? Not yesterday, three games ago. Three.

Of course all this the day after a move to Hull City didn't materialize for "financial reasons".

Basically I want to hear what Panucci has to say - be it contrition or a lengthy hate poem to all things TGIP - and then I want to hear Spal's thoughts on the matter (in that sultry Tuscan accent). Then, and only then, can we start to piece this together.

Continuing with the trend of not having too many healthy bodies at one time - that would be far too easy - Riise has picked up a boo boo on his knee (after that brutal collision with Migliaccio against Palermo) and will be out 40-45 days - or roughly six weeks.

All I can say is thank the good buddha for Marco Motta. A right back normally, yes, but one with immense versatility who can cover the left just as easily. Still, you'd hope he wouldn't be thrust into the fire before his official presentation (TBA).

Riise going down isn't a massive loss - provided Max can stay healthy, of course, and not maroon Motta during his first month - but it certainly hurts his momentum as he's really become a solid contributor.

List B is for youngsters with three years of training in Italy. Of them, one would assume the only player who has even the slightest of chances to play is Riccardo Brosco - the Primavera's next big thing - but he's a CB and that position is well covered by Simone, uh, Loria and, um, Souley...

....yeah, so Brosco is the most likely to play.

Totti: Fine for Genoa. Again with the "not bringing him to Calabria knowing full well it would be a mud pit" theory.

Mirko: Fluids do wonders, man, wonders. Big Game Mirko has shaken off the sickies and is ready for the Big Game. (Genoa? Big game? Surely not...)

Simone: Also fine, ready to run his ass off and miss sitters galore.

Menez: Now a thigh knock. I suppose if too many bodies get healthy he'll be unavailable on the weekend, but if not then the quota should be taken care of and he'll be ready for the Pietro Grifoni.

i. Alberto De Rossi (Daniele's papa and head of the youth setup) has never seen Sugar David play and doesn't know whether he'll will be with the Primavera or the first team.

Wow? Not sure what to say here. Is he the newest self-moving training cone or what?

ii. Reggina have been slapped with a €7500 fine after their fans subjected Roma players (Okaka, presumably) to racist chants throughout the game. Real classy.

iii. Winter Mercato '09 has been closed a matter of hours and speculation on Summer Mercato '09 is already abound, with two names hitting the forefront: Sergio Floccari & Mr. Bullshit Goal, Fabio Quagliarella - with Juve also tailing both.

Really don't see the need for either if the strike force stays as is and Okaka Chuka gains his needed experience - he is, after all, very, very close to being ready. Seems money could be better spent revamping the back - unless, of course, the formation is changed.

And while Quagliarella's epically frustrating at times - loafing about, yelling at teammates for not getting him the ball when he's offside and things of that nature - it is tantalizing to think of a guy with his range in Rome. Not just his spectacular goal shows, but imagine the opportunities he'd open up for Simone bombing into the space just vacated by a defender aiming to close down on Fabio 30 yards from goal. Opens up a whole bounty of possibilities for all. Aquilani and DDR have cannons, no doubt, but they ain't no Quagliarella.

In case anyone missed his most recent submission....