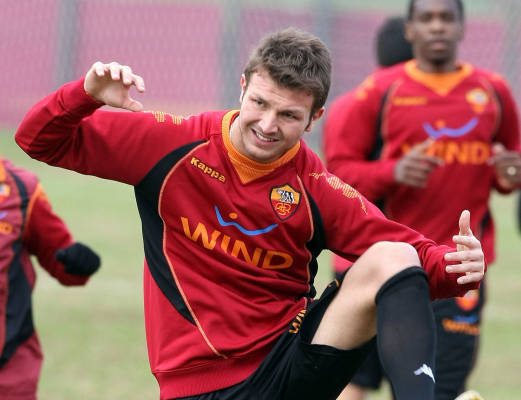 Marco Motta, the sprightly, doe-eyed 22 year old, gives Christian Panucci, the 35 year old veteran of great and varied experiences, a lesson in how to say all the right things:

"It's a dream for me to be here among so many champions, at such an ambitious and important club," Motta said in an interview with Roma Channel.

"My first training session was a bit like my first day at school. My new teammates received me well, they welcomed me and I believe they are a fine group of players."

"To know that a team as important as Roma thought about me was an extraordinary and wonderful sensation," Motta enthused.

“I hoped until the very last moment that the transfer would go through and it did, so I am really very happy.”

“Roma are the best,” he said. “They are one of the strongest clubs in world football and to have the opportunity to train every with champions of Totti and De Rossi's calibre is extraordinary.

“Alberto Aquilani was the only player I knew personally as I played with him for the Italy Under-21 side.”

“The first six months for me were very good,” he explained. “Then we took the decision together to go our separate ways.

“I would like to take this opportunity to thank Udinese again for allowing me to get where I am today.”

“I think about training to the best of my abilities every day,” he said. “Every training session is like it were a Champions League game because I train with great champions.

“I will look to learn the tricks of the trade and take advice from Coach Luciano Spalletti who is very good. Every training session is fundamental.”

Sounds like a kid who woke up in a toy store on Christmas morning. Or a guy who walked to training in the morning for the first time and saw Francesco Totti.

More of the same: injured in training - sounds like a knee to knee blow - and is questionable for the Genoa fixture. This means Marco "I've been here two goddamn days give me a break now" Motta may be thrust into the lineup fr a big match, which is lovely. So, assuming Christian Panucci is still in the corner with a dunce cap adorning his empty melon, this is what the Genoa defensive depth chart should look like:

I) Philou will be joining the Phrench squad for their friendly against Argentina during the utterly pointless international week upcoming. Chances are he'll enjoy chatting in French, a week of training via horoscopes and some serious pine time.

And Yeremy Menez was called up for the initial squad (first draft) but did not make the cut because he's a Taurus, or something.

And in our newest addition to the Roma Offside, welcome to the Help A Romanista Out Corner (also starring the aforementioned Androhn Tallarver):

Go here, watch the minute long video, give a rating and help a Romanista obtain the second most bestest employment option on earth - after playing for Roma, of course.

Next week: Do Chris' laundry.

iii. Damiano Tommasi is chillin' in Rome waiting to figure out the next phase of his career, which may involve China.

iv. Pictures of today's training featuring a quasi-remorseful Panucci. Also, everyone had their razors stolen in the middle of the night.

David looks as though he's just come off a two week bender, all bloated and going for the ruggedly-handsome-but-it-really-just-means-I'm-lazy unshaven look in lieu of his normally silky smooth Chilean skin.

And the half meter hurdles have befuddled Simone Loria. Excellent.

v. Completely irrelevant to the calcio, but found it interesting that Virtus Roma, the sister hoops team, is employing Brandon Jennings, kid who became famous in the basketball world after eschewing college for a one year trip overseas before heading to the NBA lottery.

And a certain someone can be found watching his games (first pic).

vi. La Bestia will be available against Genoa.

Or at least he will until tomorrow's injury list is released....