Share All sharing options for: Genoa: Revenge Is A Dish Best Served... 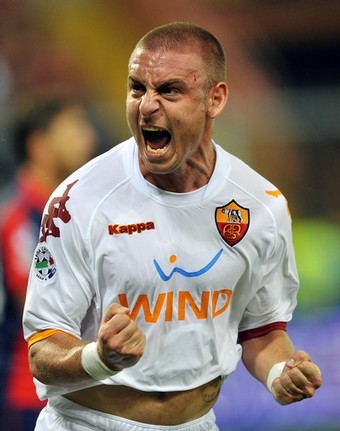 Biggest game of the year so far. Well, except for Napoli. That was so two weeks ago, though. Sampdoria was probably the biggest game too, given it meant that "game in hand" was more than nothing - or an apology from Christian Panucci. Actually, Fiorentina was the biggest game of the year. That dual barreled lesson in finishing ineptitude let us know that the fall's Roma was gone and lost, allowing a new, albeit less sexy, Roma to rise from the ashes like a phoenix (phoenix > griffin). Or was Lazyo the biggest game? Lazyo in a Champions League spot and Roma a hefty shout down the table? Surely a victory - any victory - must be the "biggest game of the year". No wait...it had to be expelling the blues against the Blues. Yeah, twas Chelsea. No doubt.

They're all "the biggest game of the season" from here on out. No longer do "small teams" exist (just ask Milan in the morning) and they're all games which will require a Champions League final mentality. But as every game is a big game, it's not the end all and be all should the optimal result get lost on its way to Rome. They trailed Inter by eleven last year roundabout this time and that Nerazzurri team (plus "consultants") was far, far better than this Genoa team. Actually, I daresay this Roma team - the one we've seen since mid-Novemeber - is better than last year's - but that's a entirely different discussion for another day.

Sure, it's a big game and a fantastic opportunity for two birds/one stone, but it's not a final and I suspect the players feel the same, hyping up the match for the purposes of sending a young and untested Genoa into a pulsating and thunderous Olimpico environment feeling as though their legs are playing in a final - particularly that Fiat guy, who's surely due for a Chivu moment.

Big game? Yes. Big opportunity? Yes. Must win? No. Not for Roma, at least.

Roma's D being the aberration last week in Calabria and Genoa's sister smooches coming against Milan and Catania (both 1-1).

Similar form via similar methods: Genoa conceded two versus Roma's three. Staunch defending is the way of the future, man. Don't expect this one to challenge any goalscoring records.

Injury Breakdown: Cicinho's in the squad and has been training so one would assume he'll take part from the opening tweet.

And with the now not-so moody right back by comparison's return to the lineup a spot was vacated for the injured persons quota, allowing Jeremy Menez and his pubaglia to enjoy a seat in the stands accompanied by a fresh bag of ice for his man parts.

Big Genoa news - because, really, while not a "one man team" they're certainly very reliant upon one man - is that Diego Milito has somewhat recovered from his flu and will likely play. It's always nice to beat a team at its pinnacle but if he doesn't play or is running at half throttle? No tears here.

Spal's words on the subject:

“Panucci’s exclusion is a logical consequence of what has happened recently. He will not be called." (Note: He's also injured, but his omission is still wholly because he's a numpty.)

“After every game we have a talk in the locker room. There has been no apology to me or to the club. The club and I decided to leave him off the Champions League list and all we did was follow the player’s intentions.”

“I talk things over with everyone and I’m fully aware of what is happening. We are interested in tomorrow’s game and that is all.

“Panucci wanted to leave, it was clear to everyone. Will he play for Roma in the future? My future is tomorrow and Panucci is not there.”

The last line could be misconstrued - it's merely a "one game at a time approach" - but the message is pretty clear: Panucci is going to have to do some serious groveling if he wants to play even a single minute the remainder of the season.

Motta/Cicinho and Perrotta/Taddei are the options according to RomaNews, which sounds very about right. And with David playing so well last week - not to mention this being a game where Roma will want to tick off those possession minutes - it's back to the pine for Alberto, most likely.

Breaking down the Genoa defense: It's being said that Matteo Ferrari knows an awful lot about Roma's attackers. Tis true.

It's also true that Roma's attackers know just as much about Ferrari. Where doth the money lie? Thought so.

Nullifying Diego Milito: I suspect the only people yapping more than Carlo Zampa at the Olimpico today will be Juan and Mexes as they constantly keep an eye on his whereabouts within the 18 yard box. Expect DDR to sneak back quite often as well.

Karma: Remember the last game? The one full of criminal refereeing - mysterious offside goals and onside goals called back? Remember the Sant'Elia trip last season when Matteo Ferrari put an exquisite finishing touch on Inter's scudetto? They're due.

Streaming: Still with the MyP2P stuff.

Because of pending legal proceedings, Myp2p has removed all links in the following competions: Elitserien - SM-Liga - NHL - Swedish Allsvenskan - Italian Serie A - English Premier League - Dutch Eredivisie. Once a judgment has been given, we will notify you of the outcome.

Bet365 works if you live in Europe - and anywhere but the US, I believe (it does, however, require a free account). Roja Directa has some backup options. But the best option will presumably be the one most of us use every week: Atdhe.net.