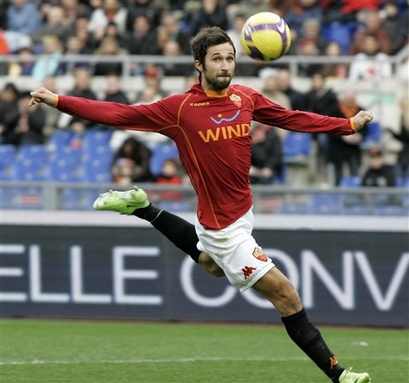 We have a very special game summary in store today from a man everyone loves, reveres and boasts the most fantastic dome in all of world football...The Grand Imperial Poobah. A brilliant man of very few words:

"The difference today was in our quality."

Genoa's a nice side, nice story and undoubtedly worthy of praise, but Roma they are not.

Hate to say it but there was no worry before or at any point during this match. I, for one, was always confident in the result. A nice change from the fall, eh?

Relatively new Offside thing still being tweaked, but the standings and stats can be found here (it's also that red Scores box top right corner of this page).

* - Still unsuccessfully trying wrap my head around Roma going down to ten men first. Not that Taddei didn't deserve it - he did - it's more attempting to fathom quite how Genoa didn't open up the red card festivities. And I'm going to need a team of calcio scientists to explain to me just how Thiago Motta managed to play ninety minutes without receiving a card. That was one of the dirtiest individual performances we've seen in some time, with at least three elbows in the first fifteen alone. A game surely deserving of a spot in the Dirty Play Hall of Shame on the shelf right next to Adrian Mutu's lifetime achievement award.

And Genoa as a whole are hardly squeaky clean as well.

i. I think the only tackle DDR missed all day was his attempt to take out Cicinho during his goal celebration. (0:22)

ii. Could someone tell the Brazilians to stop kissing/pointing at the Wind Italia sponsor logo? That looks really bad. Badge is up and to the left, lads.

iii. I'd like to know why Luciano Spalletti celebrated every goal as though he was being rectally probed. Come on, those were sublime goals. Crack a smile, man.

Doni: Didn't require any otherworldly saves, but it wasn't exactly easy, either. 7

Cicinho: Hope everyone saw who started the sequence of quick passes which resulted in his goal. Twas....Cicinho.

Now the good news. What looked like utter disaster at the time is now damn near the best case scenario: no ligaments tears and he may be back for Atalanta next Sunday (though I suspect that's Spalletti being overzealous). And even without Cassetti's injury the impending aura of doom surrounding his departure from the pitch shows how well he's performed over the last month or so. 7

Motta: What more could Luciano have asked from a 22 year old kid thrust into the "biggest game of the year" due to injury after being in town all of five days? I was blown away. Not that it was impeccable - though it was damn near close, only screwing up on that one occasion where he did his bestest to juggle himself into debut infamy - but that he did what was asked: he stopped attackers when they needed to be stopped; he created space when needed for safety; he displayed quality in the face of workrate and experience. It was efficient with a little bit of flair and quality thrown in to excite the crowd as only a shiny new toy can. Maybe the best debut one could have hoped from Marco. An immense talent and I suddenly have zero fears should Cicinho knee take a downward turn. 7

* - Not to go too overboard or anything but.....has Prade picked up the option yet? (Alright alright, but Marco is now officially My Guy - or the equivalent to whatever that means in Tony Kornheiser's lexicon. Actually, he's been my guy for two years, Prade was just late in getting to the store.)

Tonetto: At 34 I hope to still have the ability to eat solid foods and take trips to the grocer without adult diapers, so everything he does from here on out is aces in my book. 7

Taddei: Even though Criscito forgot on which side of the head he was thumped (atta boy), twas still a boneheaded move by Rodrigo to hit an opposing player intentionally with any body part while piggybacking a yellow. Fortunately the other lads play nearly as well down to ten against most teams as they do at full strength - just don't ask them to play with the advantage - and it was rendered moot. Still, potentially catastrophic move. 5.5

DDR: Best defensive mid in the world? In the select few at worst. What a virtuoso. 8

Brighi: As tongues were falling helplessly out of mouths throughout Rome while stammering to rain down plaudits on DDR, a second world class performance was being turned in at the Olimpico. In fact on any other day we'd be pounding tears on the pavement demanding Matteo be given the hallowed shirt of House of Savoy blue. But such was the magnitude of Daniele's game.

Matteo Brighi is, once again, player of the year. Where this team would be without him is just too harrowing a thought. 7.5

Simone Perrotta: Helluva day for the Italians in midfield, eh? (Well, 'cept for one.) He sliced and diced himself into space in the opening ten minutes for about 37 chances on net and then so capably flexed back his attacking responsibilities - and glories - when Rodrigo went off.

This squad is very fortunate to have the workrate and quality of Brighi, Perrotta and DDR after losing a man, and Simone is perhaps head of the queue. His ability to run enough for two people in those circumstances is immeasurable. 7.5

Mirko: A manic depressive performance if ever there was one. Engine was running just a touch past full throttle, inventive in his movements and due to turn the Genoa back line into a collective episode of vertigo, leaving us to think a historic performance of both quality and quantity was on store. And then he'd unleash a touch during a critically dangerous attacking moment which could only have been borrowed from Simone Perrotta's finishing boots.

He did make up for it, though. Lil' bit. Gives one the feeling if it were up to him Roma would play 38 fixtures against Genoa in the Olimpico each year. 7

Totti: Nice to see Hack-a-Totti was in full effect. 7

Julio Baptista: Having watched the goal again - and there's no doubt it was a fantastic goal - and finding an angle which shows Julio's eyes throughout the movement, it seems the conclusion can be made that his saucers just never left the ball (which answers a great number of other questions that are neither here nor there). So snubbing Alberto's 1v1 was likely unintentional, and he was just doing what is undoubtedly now his patented move: cutting in from the left and through defenders before piledriving a ball from the edge of the box with his right foot high into the goalmouth.

Still, maybe looking for teammates every now and again would be a halfway decent idea. 7

Aquilani: Awful in most aspects - sans those bursting runs which put him in place to be snubbed by Baptista (being in a position to fail/be overlooked is a skill, ya know) - and he knows it, as nobody puts more weight on the shoulders of Alberto Aquilani than Alberto Aquilani. And, while we've been fortunate to watch the rapid maturation of DDR, we've seen this stuff before with a certain iconic figure who suits up in red and yellow every now and again. Alberto oozes Roman. Really quite as simple as that. 6

Next week: Away to Atalanta.