Arsenal: A Tale of One Man

Share All sharing options for: Arsenal: A Tale of One Man 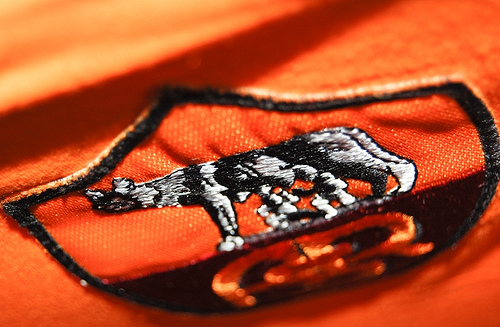 As it stands, there will be no Totti. There will be no De Rossi. There will be no Perrotta. The squad list appears bustling, but as ever, it's anything but. The bodies are dropping. Those that could be considered "fit" we can probably count on one hand. Mexes has the flu. Aquilani will be risking life and limb solely for a 15 minute cameo. Juan hasn't played since Genoa. Pizarro's thigh remains in question. Doni's knee and shoulder give him worries - before we assess the state of his brain. Simone Loria is unfit in more ways than one. Things have become so desire there may be more behind this picture than a first glance would indicate: 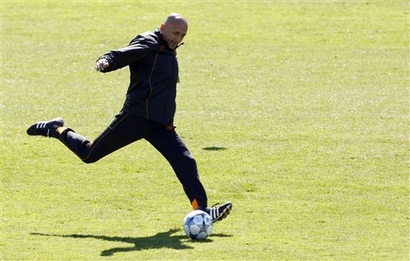 And in the wake of crippling injuries, only a cohesive team can reign victorious.

The defense will need to be strong, that goes without saying. If they crumble the rest is moot. The back four must be collectively and individually perfect. Same goes for the midfield, but they inspire little confidence as early rumors indicate a 34 year old left back who has played all of seven games this year will be given his central midfield debut. And without the human safety net known as Daniele De Rossi, no less. Matteo Brighi is a fine stand-in general and Rodrigo Taddei no doubt a valiant soldier, but the collective unit hardly inspires a great deal of fear.

David Pizarro will, should he find himself fit enough, have to be on his game, as when he's not the dynamic of the side shifts. The attack is scattered, lifeless and ineffective. The midfield forced into retreat and the defense pegged on their back foot the entire game.

At striker it will be either Francesco or Julio Baptista. If Francesco plays - and really, at this point it should be expected he starts on the pine but a massive lift should the opposite come true - perfection is but the standard, regardless of injury. If Julio plays, he'll have to turn in the game of his brief Roman career.

In short, every one will need to turn in a night of perfection under the brilliant European nights. That is except for one man. An enigmatic, infuriatingly inconsistent striker, yes. But one with supreme qualities and a heart that beats for both Roma and the big game, transforming him into a burgeoning legend. He'll have to transcend perfection. Fortunately enough, this is his wheelhouse. The days he lives to conquer and we live to watch. This lineup is how RomaNews sees matters shaking out, but given the fact that not even Spalletti knows what his lineup will look like until the morning's medical rounds, I don't think there's much use in dwelling on this. No point guessing injuries.

Arsenal are going to do precisely what they did in London: attack with speed and life. Quick, incisive movement, bursting runs and close numbers down on Romans when in possession. They're going to try and make life hell for Roma's attackers and a worse hell for the midfield and defense. In other words: prevent Roma from playing Spalletti's game.

Roma v Possession: Maintaining possession is really the most simple form of defense. The opposition can't score when they don't have the ball, can they? That's step number one after the shambollocks in London. Keep the ball smartly - meaning doing so while accounting for the counter - and half the battle is won.

A Back Four v Four in the Back: With Juan ready to go the worry lessens significantly. He's twice the player as Loria and it also allows Mexes to focus on playing his own game, rather than having to play the part for two. Motta's been a stud and Riise has been solid more often than not; thus enabling them to easily play as a cohesive defensive unit as opposed to simply standing as four defenders on a pitch. If they do that while playing to their expected levels, Arsenal should find attacking a great deal more difficult than in London.

Mirko v Arsenal: Great players can transcend tactics. Mirko's that and so much more.

Roma v Injuries: Goes without saying, I think. For a team physically shattered going in, they can ill afford any other setbacks.

Arsenal v Rome: In the last two years, Roma have dropped a total of twelve Serie A points at home. They've lost twice in the Champions league and drawn once - with an incredibly strong Manchester United team taking the bulk of the credit.

The last English team to jaunt to Rome after a 1-0 win in London? This one:

The Stadio Olimpico is a fortress. Their fortress.

Maybe no predictions will bring some luck?

Not really sure what else to say. They deserve this. After the drama and mourning of the summer, the constant wave of injuries resulting in a horrid start and the continued crawl back up the table, they deserve another round at the very least. They've fought too hard all year long. But then, the gods haven't been smiling, so why should they now?

Liveblog: Si, and early, as this is only really half the preview. Much of what needs to be discussed can only happen once some concrete injury news leaks.