When Everything Is Not Enough.

Share All sharing options for: When Everything Is Not Enough. 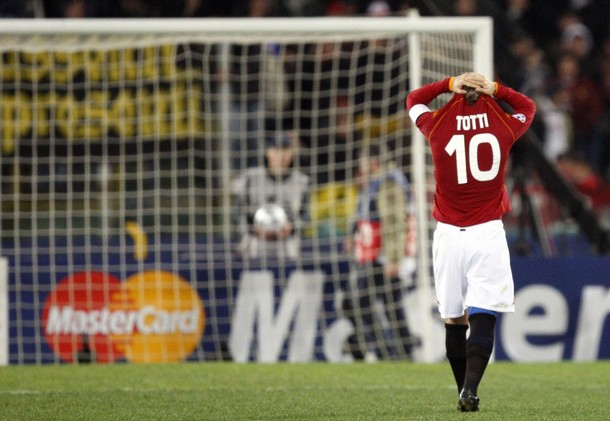 This page stayed blank forever. Upon sitting down at my desk I could never figure out just quite what to say or how to say it. I even managed to procrastinate every way possible. I went to the store and saw Rodrigo Taddei's face in a loaf of bread, but still nothing. I came home with a splendid meal to prepare but got so lost in the mastery of Marco Motta I ended up pouring myself a bowl of cereal. I went to check the mail and threw away the bills instead of the junk mail while still attempting to comprehend the shocking rise of Souleymane Diamoutene.

A worker in the elevator had to inquire of me three times to which floor I was heading before I managed to slowly lift my head and mumble, "Matteo Brighi". I wound up, through some great miracle, at the top floor and whilst fumbling around with my keys, decided the only way through was to start off with the heroics of David Pizarro - a man whose stature belies his heart. (Or is it statue? Or both, perhaps?) But then I quickly realized, "Pizarro may have been a hero for playing two hours through constant injury, but doesn't the hero save the day? And thus, should the hero not be John Arne Riise, a man who played the part of six Herculean men in ginger cap?".

Or was it Totti, who risked his season for the mere opportunity to shepherd his great love one step closer to his great dream? No, that must be the freshly clean kitchen talking - those scents can do wonders. Perhaps similar to the smelling salts given to Max Tonetto before the game, enabling a man of seven games all year and grandfather of at least two in the opposition's reserves to play two hours of swashbuckling football. Or maybe the smelling salts Julio Baptista needs to reviv....nevermind.

And of course who was I forget Juan, the man only so gracious as to gift the opportunity for broken, shattered, stripped, stampeded upon, maimed and now-slightly-slow hearts. I decided to spend the shower, my greatest thinking time, penning an opening ode to world class defending, Brazilian class finishing and Roman class heart. But after the shower, while making my tea - Greek mountain, of course - I wondered whether the soggy weather played some part in his reinjury and thus the inclusion of Julio @#$....nevermind. Best to leave that one alone, it's not going to be good for the health.

While all of this was churning about and productivity reigning supreme, I struggled greatly with crediting these magnificent moments of football to just one man. Not one player led the charge. Not one player displayed more passion than the next. Not one player was responsible for providing a performance which buoyed the hearts of masses in defeat.

They were never individuals. They came together collectively to become a unified team. The plucky underdog, begging for sympathy but never asking, grinding for the cause when it could so easily lay down. And that's when it came to me: this wasn't real life. This was a movie. Or wait - a dream? No, can't be. The hole is still in the wall. But doesn't the hero always win? Maybe this script managed to slip by Disney - damn recession. That must be it. They must be heroes.

Heroes who didn't just fight, but clawed their way back from the dead. Heroes who sacrificed body and limb for the good of mere fabric which happens to adorn their torsos. Heroes who went above and beyond reasonable request. Heroes who instilled in me a sense of faith in sport I've never enjoyed before, watching a collective group of athletes who leave absolutely everything on the field of play under the most dire of circumstances. Heroes who willed themselves not only to levels of appreciation and awe, but inspiration.

For this they deserved to advance and so much more. But when everything was not enough, they did the next best thing. They came home on their shields.

And despite all this, I still don't know quite what to say. They were simply that magnificent.