Share All sharing options for: Sampdoria: Crisis? What Crisis? Oh, That Crisis. 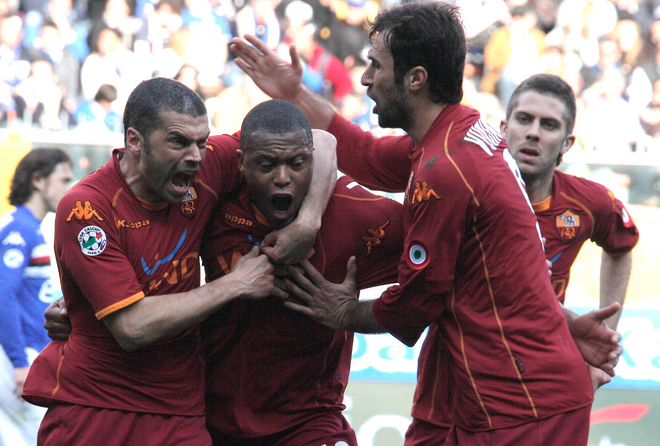 Sometimes it just doesn't pay to play the games.

A win against a resurgent Sampdoria Giampaolo Pazzini at home was always unlikely and a draw is something The Grand Imperial Poobah surely packed happily into his luggage for the trek home. Matters were dire the moment Wednesday's Arsenal fixture ended and they were only compounded when a team down by a goal with no legs left were idiotically relegated to ten men with more than a half hour remaining. To magically unearth a point from the mountainous rubble? Unthinkable.

As for Motta, that was his first big cock up since joining the side. Yes, he's been beaten at times and not every decision has been perfect, but that was the first utterly idiotic move. Not because he'd been reckless much of the game - partially a result of Sampdoria actively trying to get him sent off, something they were both right and smart to do - but because he'd been reckless without thinking two moves ahead. The red hurt inside the Marassi, no doubt, but not nearly as much as it'll hurt against Juventus, when they desperately need healthy bodies, particularly so in defense.

The other monumental cock up came from a man quite familiar with the feeling, Alexander Doni. Cassano's ball on the first goal was simply top drawer footballing, the type of stuff strikers write home about on tear-stained papyrus, but Doni somehow managed to trump it with his silver-platter service on the second goal. Maybe it was just his way of sticking it to Italia's ultimate enfant terrible. 'Anything you can do I can do better' oneupsmanship, I guess.

While most would probably give it to Julio Baptista, two things about his goals stand out: one was a penalty and the other a ball which any ambulatory person alive finishes - except Simone Perrotta, who skies that into deck two on a good day, deck three on a bad (and you'll notice the Luigi Ferraris doesn't have a third deck at the ends). Nice that he got two goals, but pretty sure most on the pitch, not to mention those in nursing homes, score both.

Which means man of the match goes to.....

Doni. Yes, it was a monumental faux pas, but when the tired legs showed at the end he threw the entire team on his back and ushered them to the purgatory land. Without him it's 1-1 at half time but 3-2 Samp at full time.

Extra special mention - if not co-MOTM status - to Max Tonetto for whipping in that early cross which was impossible not to finish without a lifetime of ridicule while also winning the penalty for Julio to power home. So technically that's two dimes for the makeshift midfielder.

Only Roma could possibly have a player who signs one yellow away from accumulation, picking up said yellow when they so greatly need him. More of the same. They're conspiring, etc etc...

* - The investigation into De Rossi's words - "they cheat, everybody knows it" mini-rant (paraphrasing) - hasn't even occurred and will Friday. Not good.

Perrotta: Looking at another month.

Cassetti: Began training again but only lightly and he won't be available for Juve.

Cicinho: See you in October?

Aquilani: Simply due to a numbers issue, may be forced onto the pitch on the weekend despite having no business there whatsoever with his ankle.

And having not known the full reasoning behind his injury, I guess he can count himself lucky. Like Miroslav Klose this weekend, Aquilani's ankle injury came through stepping on a hole in the pitch. Unlike Klose, fortunately, it hasn't required surgery (yet) and he won't be out the same eight weeks (again...yet).

Juan: Gone to Brazil for ten days worth of treatment, definitively out.

Francesco: According to Roma News, very unlikely to play.

He is Francesco Totti. He is the captain. He is the lifeblood of Roma. If he can walk, he will play. No man would sacrifice more for the good of La Magica.