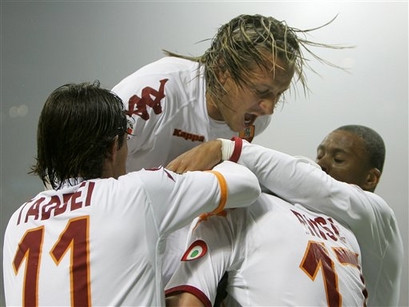 It's been nearly three days and everything that can be said has been said. And mostly in the press where suspensions are bountiful. But let's run down a few things:

It's been bottled up for quite some time and this is the second Inter fixture in a row where points have been dropped due to refereeing errors. I venture to guess it's a minor miracle TGIP didn't pummel the fourth official on the spot - I mean, look how gray the man's hair has become.

Francesco: No go for Udinese and his status for Arsenal - depending on whom you ask - could go either way....much like Mourinho (oh please, like his "man management" is some big secret).

Perrotta: Also looking doubtful against Udinese and I suppose that means Roma v Arsenal is in danger of not enjoying the participation of an Englishman.

Juan: With Panucci back, I don't really see how he's risked on the weekend even if he's healthy, as is reportedly the case. Juan's not exactly the impenetrable man.

Cicinho: If healthy, I think he may be given the run against Udinese. As good as Motta has been....Marino understands his tendencies and Cicinho was on quite the run himself when he pulled up lame.

Mirko: MRI on his back - because that's what you want to worry about with your €20m+ 25 year old striker, back issues - turned up negative and he should be good for Saturday.

Menez: Yeremy is suffering with the bends.

To be fair, while he does dive it's not Nedved or, gasp, Balotelli class dive. He doesn't really lurch forward, he just goes down whenever someone breathes a bit too heavily - albeit in the third deck. Hopefully Matteo or Daniele will teach him a thing or two about staying on one's feet unless hit by a semi - something which would have an entirely different connotation had Inter scooped him up last summer.

Stuffs & Briefs, But Not Stuffed Briefs

I) I don't care how big a twat Balotelli is - and at 18 he's already up there with some of the biggest - there's really no excuse for any sort of racial discrimination from any fans, much less Romans. So if they could politely go fuck themselves, that'd be splendid.

"I would advise Mourinho to listen better to Spalletti's press conferences," he said to Romanews. "He could learn something instead of uttering such silliness. He has a lot to learn from our coach from the technical and tactical point of view, as well as that of the attitude and respect for other people: that is the important thing.

"Mourinho should be more serene and think about his work. We'll think about the rest. He should mind his own affairs. We do think about our own problems with professionalism and seriousness, because we have many matches to play."

In other words: grow up.

V) And finally, this is probably worth a look - despite the source.