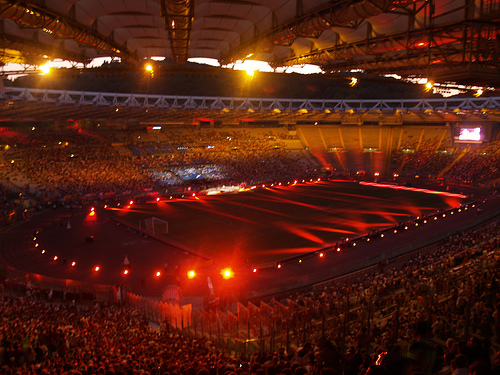 The last run around, Udinese were near the top o'the table. Now, you'll notice, they aren't. Not by some margin.

They went through a rough spell, much like Roma, but have kinda sorta righted the ship and in their last six games, have the same exact record as the boys in red & yellow: 3-2-1. Add in the fact that Spalletti will be fielding this one from the stands and the flu - thanks, Yeremy - is picking off squad members, starting with the attack, one-by-one, this game became something of a mystery for me. Totti's out, yes, but last weekend displayed - and Spalletti said it today - that this team is more than Francesco - even if much of the attack will be stumbling around drunk on NyQuil. The back's solid now that the acronyms - GOMR & TGIP - have kissed and made up, while Juan's aura on the bench will also boost the defense. (At least until he acquires a splinter which infects his leg and requires amputation, thus ending his career.)

But what about Marco Domenichini? What's he going to bring to the table? Spalletti's in-game management has been questioned once or twice, but we haven't really had the chance to either question or praise Domenchini's midgamedecisionmakingability. Marino is quite the talented tactician, will he be able to exploit a Roman sideline sans the brilliant dome of The Grand Imperial Poobah? Will Mourinho be hiding in a laundry basket in the Olimpico tunnel? Lots of mysteries.

Then I checked the detailed standings and got a look at Udinese's away form:

Even better, they've done so with the universe in order, playing their role. Away to Juventus, Inter, Fiorentina and Milan they have precisely zero points with a goal differential of seven in the red, scattering their results of homesickness throughout their initial good run and soft underbelly of the middle roads - meaning it's regardless of form. In short, they come just for the parting gifts.

Will that be the case? Who knows, but it's certainly a solid start heading in.

This is getting redundant, but......though the squad list looks stacked, in reality it's anything but. The injuries and sickies are still plentiful, just more easily hidden. The rundown:

Totti: Out, obviously, with the knee. As an added bonus, he's acquired the flu. The gods are conspiring, surely.

Menez: I believe it was his hamstring he had to shake off, now he's got the flu as well and is passing it around (yes, he's spending this week making friends with my shit list).

Mirko: His back is still balky but he's in the list - though not nearly 100%.

Cicinho & Juan: Both "healthy", but both just returning from their woes. Unfit Brazilian defenders? Oy.

Aquilani: Aquilani-itis - in but far from fit.

And then there are the 3-4 injuries sure to occur between now and the time the final whistle blows at the Olimpico.

Other than swaps determined predominantly by fitness - Vuci for Menez, Motta for Cicinho, Juan for Panucci, Tonetto for Riise - this lineup is highly likely.

I predict I'm going to bed now and will wake up roundabout the opening whistle (which is code for: I'd like to do more, but this has been the week from hell).