Share All sharing options for: Udinese: Declining A Free Lunch. 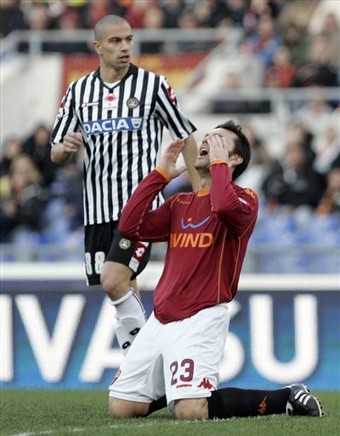 Normally a picture is worth a thousand words. In this case, it's worth all of them. They - and by "they" I mostly mean "Vincenzo Montella" - had their chances and they botched 'em. Botched 'em good.

Let's get the player ratings over with....

* - Shouldabeen a peno, no doubt. Maybe that will scare him into playing the game of his life on Wednesday.

Riise: Meh. Hung Panucci out to dry a number of times. 6.5

Pizarro: His passing was woeful and when his passing is such, it throws off the entire attack. It wasn't all bad, though, as he was decent enough on the ball. Still, had he been on par in the first half the game might've ended up much different, as Udinese was offering up acres and acres of space. 6.5

* - Initial reports are saying he'll be very unavailable for Arsenal.

DDR: It's never a smart idea to show up the ref but that was also never a second yellow. A first? Sure. A second for dissent? Come on. And it's not as though he pulled a Deco and was clinging onto life nine as it were. 6.5

Also, I called it - from the preview:

Ain't I the genius?

Now the only question is whether he's suspended for the red and his mouthing off or whether the FIGC decides to just combine the two and suspend him once with a duffel bag's worth of fines.

Menez: That was flatout embarrassing. I'd like to give him the benefit of the doubt but he goes down at the smallest hint of contact time after time after time, to the point where I honestly turn away when he's on the ball. But what's more is that he fails to realize if he just kept to his feet he'd blow by the next man half the time and do exponentially more good for the team on the whole. Yeremy is so exquisitely gifted with such technique and a top end pace no defender can match that he can beat most two and three man teams in his sleep. Now he's just getting a reputation as a diver and it won't be long before he's legitimately hacked down in the box only for the ref to wave play on based on past discretions. Not to mention every single coach in Serie A knows exactly how to gameplan for him: throw the most minute -and legal - bump and possession is won. 5 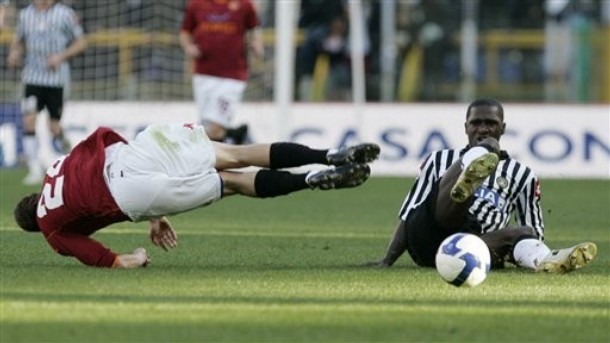 Brighi: Solid, much a victim of the erratic nature of the attack in the first half and then had to play everyman once DDR went off. 7

Taddei: Rodrigo was my hero today. He did so much running - not that it's a new thing - that he undoubtedly worked off all that birthday cake. But there was one moment for me which quintessentially summed up his immense, and often unappreciated, contributions to this team:

35th minute, Roma had lost possession and Udinese worked the ball over to the right defensive flank. As they were in possession Rodrigo, who had been drifting, steamed over to the left and hassled the zebra in possession into giving up the ball about 5-10 yards up the line. Rodrigo immediately turned and got on the new man, forcing whomever it was into giving up the ball into the waiting hands of someone in red (DDR, perhaps) while Taddei bombed over to his side on the right. The chance amounted in nothing, but it was a chance borne out of pure desire and determination. He may not have the skill of a Menez or Baptista, but that doesn't mean he isn't infinitely more important to the structure and overall composition of this team. Spalletti plays him because he's a favorite, yes, but he's a favorite for a damn good reason. 7.5

Mirko: Has Mirko been more important to the side than Totti this season? One could certainly make the argument. 7.5

Montella: Oh Vincenzo...what does one say? He's got more rust than the Titanic, but you just have to finish one of those chances. At least if the old adage "form is temporary, class is permanent" holds true. Or maybe there's room for an addendum: "...unless one's knees are being held together by silly putty".

Safe to say he will never have a better chance - feel free to pluralize as well - to score in a Roma shirt again. 6

Cicinho: How do you think Domenichini felt when Pizarro went down and DDR went off with precisely zero midfielders on his bench? Real trial by fire, eh? N/A

Domenichini: His hands were tied and he did the best with what he had. I'm still convinced the Menez sub was partly for the benefit of the viewers. 7

That's all at the moment. Will have other thoughts when the disappointment fades.