When A Derby Isn't A Derby

Share All sharing options for: When A Derby Isn't A Derby 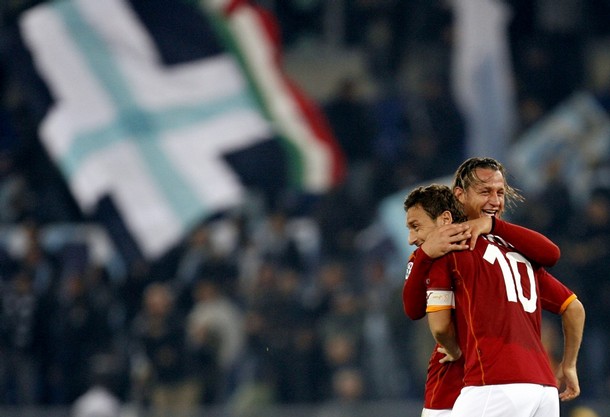 Or is it? Do the teams on the stadium scoreboard supersede the atmosphere? Or is the raucous, fiery battle of the fandoms that which comes to define a true derby? I suppose it depends, but this feels anything like a proper derby.

If we thought the derby della pace following Gabriele Sandri's death was a tepid affair, today's edition just might fail to register on the decibel meter. A somber mood envelopes the players, the fans, the stadium and the whole of Italy after Monday's natural disaster, and this game has become simply that: a game.

And so just a game it is.

Going into 'just a game', what do they take? They take Francesco Totti, which is more the other side can say for their entire history - so that's something. They take a roster without Primavera padding - the youngsters back amongst their peers where they belong. They take a starting eleven which looks like an honest to god Serie A side - unlike a certain team. They take a bench that doesn't look stripped from a local schoolgirls' team - which is the most the other side can say for its entire history...again.

So they take a superior history with the backing of nearly an entire city, making this game feel almost like a derby. Almost.

Outside of Cicinho, all should be back within a week or two. Not ideal considering the fixture at hand, but it certainly could be and has been worse.

Brighi on the bench? RomaNews says it's so with Taddei returning and Julio primed for 89:59 of infuriating ineptitude and :01 of derby heroics.

The bodies return for Roma and Lazio are...well...Lazio.

Streaming: MyP2P.
Liveblog: At the ungodly hour where I am currently? But of course.