Share All sharing options for: Lecce: "We Play Football. Sometimes." 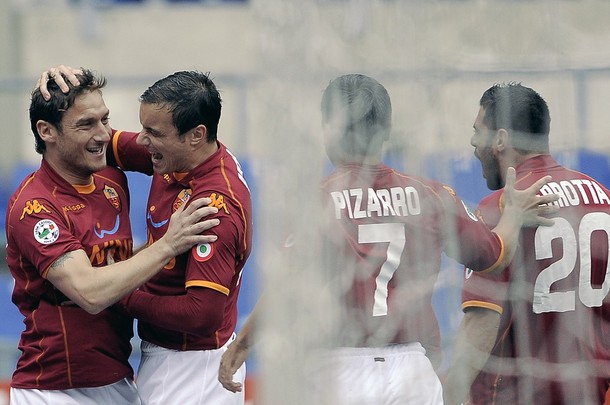 Who cares about Roma? It was all about everyone else this weekend. Fruit baskets to Udinese and....just Udinese.

Far bigger than the win against Lecce were the losses by Genoa and Fiorentina. Not just for the gained three points, but for the Roman mentality as well. Fewer points to the summit, more confidence for a team which thrives on a positive mindset. An immense weekend all around.

Unfortunately the means didn't match the result. Or it did, but only for about thirty minutes. By the time a quarter hour hit, I was expecting Roma to put up a cricket score. But then they all decided to up and go home. Comfortably ahead and having proven they are the far superior team, they decided to blow their own whistles.

And then Lecce took advantage to make it 2-2 - advantage of both Roma's laziness and Daniele De Rossi's hip bone - and the Romans had to jump back into their fancy sports cars and return to the stadium to earn the second halves of their paychecks. Once they'd gone up and Lecce down a man, having proven they are, once again, far superior, they all left the Olimpico again and declared the game over. Only it wasn't and the result was very nearly in question up until the end. Typical Roma.

I'm not sure where it comes from - though I've got a pretty damn good idea (he was in the stands on Sunday) - but this team just shuts off when the result seems a foregone conclusion and have done so for a few years now. They don't take the foot off the accelerator, they put the car into park and take the keys out of ignition back home in the driveway, heading inside for a gelato and small talk. And it's done so universally you'd think it's a conscious directive from, oh, I don't know...

Whatever the case there's no need to harp too much on the game: they got the result they needed, the help they needed and we know damn well this team shows up for big games. Luckily they get no bigger than next weekend's trip to Firenze.

Artur: It may just be me, but Artur seems to take curious angles to the left and right. Instead of moving directly to his desired position, he moves forward and then sideways. Not a fan of the "shortest distance between two points is a straight line" school of thought, I see.

I won't put him on the hook for the first goal but watch the tape again and tell me his angles aren't a bit odd. 6.5

Motta: Quality cross for the second goal and just might have saved the result with Konan streaking in on net. It's largely about 90 minutes, but sometimes key moments supersede all else. 7

Diamoutene: It was precisely the 30th minute before I noticed Souley was on the pitch. Lecce scored in the 31st. It means nothing, but it might mean something. 6.5

Tonetto: I'm putting Max on the hook for scorching that gorgeous Totti backheel late in the second half. I know he's a leftback and all, but even Buckingham aspires to such royal service. 6

DDR: A solid game which could've been spectacularly capped with a goal from that obstacle course he created through the Lecce defense at one point. One of these days he'll score a goal which will have Kaka blushing. 6.5

Brighi: Raise your hand if you can name Roma's fourth leading scorer in Serie A and all competitions this year.

Now raise your hand if you couldn't deduct the answer from the name at the head of the line and someone will come around to remove you from the gene pool. 7

Perrotta: Far from his finest. 6

Baptista: You know how boxers sometimes illegally add a hard substance underneath their gloves for a harder punch? Perhaps it's time to do the same with Baptista's feet, but with soft substances. Give him boots one size larger and stuff the leather with feathers and cotton and sponge cake and the love from unicorns.

But Julio is looking quite comfortable on the left, is he not? Allows him to go to his favorite move - head down and over the ball while he cuts to the right preparing to unleash a bomb - and his abysmal touch and passing aren't in the middle of everything, thus preventing too many critical counters. 7

And re: the penalty: Edinho should shut his yap and get his leg out of the way quicker next time. Baptista's not a lightning quick player and that's always going to be a penalty with him - particularly when he's in the midst of his most favoritest move. Always.