Share All sharing options for: Fiorentina: The Six Pointer. 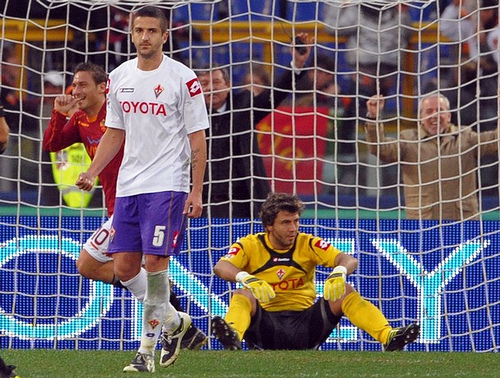 This really is getting quite old. Every week it's the same old story: assess the laundry list of injuries, pray, assess the game, pray again.

* - Suspension reduced to two games (still a far shout from the none he deserved) - back next week.

Must win game. Or must draw and Genoa lose.

I'm no longer the proponent of Fiorentina I once was - not since they installed that revolving door at the Artemio Franchi. They're far from spectacular this year - they lost to Ajax at home for the love of Buddha - and wouldn't be in the run for fourth without an incredible amount of luck and some serious injuries emanating from Trigoria (let's face it - both Genoa and Fiorentina should be sending a cavalcade of Ferraris and Lamborghinis to the Roman medical crew this summer).

But then you pit one team with an incredible amount of luck against another who if not for bad luck would have no luck at all...and you have something of a problem. A problem which has already begun: Francesco reinjured his knee in training today. They're saying he's 50/50 but knowing the magnitude of this game and his track record, he'll be on the pitch from the opening whistle. And though, as ever, Totti at 10% is still the best player on the pitch, one of these days a sustained stretch of 100% fitness from him would be nice. Actually a sustained stretch from those not named De Rossi, Brighi or Motta would be nice. (I believe those are the chosen few who have ducked the Roman injury curse thus far....knocking frantically on wood.)

Luckily this is a big game and, as the world knows, Roma tends to show up for these fixtures when they have enough bodies, which they will have on Saturday - but only just.

Roma, i convocati per la Fiorentina.

Only two from the Primavera. That's incredible.

As Roman injuries go, I'm done worrying. When they get back they get back, until then just hold your breath, tuck your head inbetwixt your knees and say the rosary.

However, there is one injury which looms just as large for Fiorentina as it does for Roma: Adrian Mutu.

That's right, this game will lack a distinct aura of scumbaggishness. Good for Roma, good for Firenze, good for calcio in general, but not good for Fiorentina. Just what the doctor ordered. Finally.

If, as RomaNews predicts, Riise slots in at centerback as opposed to Diamoutene, I think it's safe to bet the house on Roma not picking up Souley's option in the summer. (Now taking wagers on which squad will be employing a Loria-Diamoutene CB pairing next fall.)

A Brighi on the bench would feel mighty strange but if TGIP does opt for his tried and true 4-2-3-1, the above seems most logical. Baptista has looked quite good on the left - at least better than his previous levels of complete turd - Taddei and Perrotta are two of the pillars of the formation which stormed the peninsula and without Mirko, Alberto or Yeremy, Pizarro is needed for some sort of attacking vision and technical ingenious going forward and to keep our old tickers from getting too comfortable. Totti can't do it all. (Well actually he can, but they shouldn't rely on it.)

Better team wins. The universe is due to correct itself eventually, right?