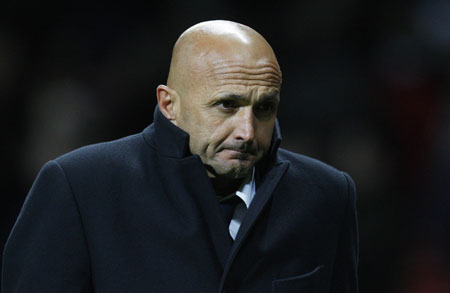 The rumblings began at the end of last year despite the fantastic finish and a thieved scudetto. Little was paid attention because things were on the up and the future only seemed brighter. The system was evolving, the players acclimating and the team was thriving even with His Tottiness in street clothes.

But there was a certain anti-Spalletti faction that forecasted doom. That angrily chastised the team's mentality, the lack of flexibility and the rash of injuries which were slowly growing - many of them the very same injury, a pattern not escaping the keen eye. There were the players - Juan specifically - who'd spent their entire career damn near injury-free but walked through the gate of the Fiumincino airport and magically morphed into glass. At the time it was a joke - he'd just taken Chivu's spot in the medical room - but at this point the laughter is long over, because Juan has been joined on the sidelines by many. Aquilani, Vucinic and Menez are all looking ahead to 25 yet searching frantically for the fountain of youth. Cassetti, Tonetto, Taddei, Perrotta and, last year, Ferrari have all had their woes go under the radar, but they too have all suffered frequent sets of injuries. And there's Totti - largely a victim of his own passion, but a man who turns up injured in training, like others, on a weekly basis.

And then Saturday came and it's all been a bit much. Something has to change.

i. I've been waiting to unleash this tirade all year, but the time has come so here goes...

The injury crisis is Spalletti's fault. Sure, a great deal of luck is involved and the medical staff probably won't be curing AIDS, cancer or the common cold anytime soon, but he's the main culprit.

His training methods have been decried for their draconian nature for a couple years now and we're now seeing the consequences. When Ludovic Giuly exited stage Rome he left a trail of criticism as would a spurned lover, and though much of that was birthed from emotion, there was a great deal of truth in his missiles towards Spalletti's training. Truths which were picked up by both Baptista and Riise as soon as they arrived in Rome. Two players who've played in the rough'n'tumble Premiership, an all-action league which you would think requires training to extremes. And yet they also found training beyond necessary at Trigoria. Training which has sent a cavalcade of the walking wounded to the medical tables from start to finish.

And though we can't say these methods have remained throughout the year, Spalletti's track record makes it safe to assume such - the man's as flexible as marble. The same problems and solutions which arose during his first days have stood strong to where they remain today. It took quite a catastrophic injury crisis and the worst run of results in some years for Spalletti to transition formations - and ten weeks into the season at that.

And what does this mean for the players? And who will finally have enough and say, "fuck it, I'm out"? After all bleeding for the shirt is one thing - but destroying one's career is another entirely. Not every player is a born Roman.

You can't run your players into the ground during midweek and expect to find them standing on the weekend. Athletes are human, not indestructible machines.

(An abridged version of the tirade, which was 80% four-letter words and thus illegible.)

More often than not a team reflects the personality of its coach. And it needn't be a rah-rah personality, just one that instills belief, confidence and resilience. That clearly hasn't happened in Spalletti's three-plus years. Saturday was proof enough, and the less said (read: reminisced) the better.

A single player selection shouldn't be counted too harshly, but the fact that Cassetti spent Saturday at centerback is dumbfounding and yet another instance of Spalletti's favortism towards those lucky enough to be amongst his trusted chosen few. And this is no knock on Marco - he's never been, isn't now and never will be a central defender, a line which has been typed a number of times through clenched teeth on this page. A line you'd think a coach the caliber of Spalletti would reciting nightly like a mantra himself. Because even the most lacking of tifosi knew that Cassetti in the middle was a result on a silver platter to Fiorentina. Even Loria would've been a better option.

And I mean that genuinely.

Spalletti simply favors those he trusts and sometimes it comes it comes at the expense of results.

iv. The second half opening.

Seriously, what the fuck is that? How is a team guaranteed to concede a goal coming out of halftime? What conclusions can be drawn other than the coach's halftime speech comprised of stories on African genocide, the Holocaust, every Matthew McConaughey movie ever made and individually sitting down with each and every player to tell them they're worthless and their mother never loved them? (Answer: Things that make you depressed.)

Again, pom poms and fiery chants aren't necessary but instilling a sense of belief and desire are absolute basics. Or perhaps - and this has been suggested a number of times this season - it's down to the worst case scenario: he's lost the locker room. Given everything we hear in the press it's unlikely, but not impossible.

iv. The letdown, the blackout, the relapse, the etc.

This is something of a combination of ii and iv.

The blackout, like iv, is inexplicable. The team just falls asleep. They're the opposite of a great striker with the corresponding outcome: 89 minutes of spectacular, 1 devastating minute of utter shite.

Then there's the letdown, where they go up by one or two after proclaiming their superiority only to kick their feet up and hit autopilot.

And finally, the depression. When things go horribly wrong they sink within themselves and recoil into the fetal position, leaving the game for the scavengers. There are moments when they show the fight of a true champion - Arsenal just two months ago comes to mind - but the bipolarity is far too much.

With the right pieces in place, the 4-2-3-1 is footballing pornography. It's the symphonic synthesis of football and art. But like many things which aspire to pleasing the ol' eye, if it's a little bit off here or missing something there, it all goes spectacularly wrong. And when Roma didn't have the pieces earlier in the year, it all went spectacularly wrong. Ten weeks later - and two years too late - Spalletti finally smartened up and brought in a replacement, some tactical flexibility. Far less appealing, but it righted the ship and brought in the desired results - to the point where it allowed Roma to surge back up the table through a run of form among the best in Europe.

So with the rombo donning a knight's cape and doing a yeoman's work, what did Spalletti do? He went back to the 4-2-3-1 without the required parts and it's all gone - you guessed it - spectacularly wrong.

...the AS Roma youth system is an assembly line producing high quality Serie A talent. Unfortunately they're dotting other Serie A rosters. Spalletti's aversion to youth, going instead with the trusted veterans, leaves them, well, leaving for the chance to grow. And there are certainly some cases where it's warranted - Curci needed playing time, Galloppa would get hardly a minute of garbage time a month behind the current crop of midfielders, etc - but you've got to think a kid like D'Alessandro, blessed with an immense treasure chest of athletic gifts, will find himself sitting on the bench for half a year and the spring on loan like Okaka (remember him?).

The AS Roma youth system is one of world's greatest - use it.

Spalletti is still a great tactician, a great man - genuinely one of my favorite in the sport which makes this all so difficult - due a hero's legacy in Rome, and no coach is perfect, but this isn't nitpicking. These are major, major issues which have not been resolved or have continued to worsen throughout his tenure. Major issues which may quietly lie under the rug with nary a notice in another club, but not in Rome.

I won't go as far as saying he's "the problem", but unless Spalletti changes, Roma will never reach its full potential. You can't expect to thrive when pushing the team forward with one hand and holding them back with the other. And if Spalletti can't/won't change, regardless of the options available this summer, then it's time to take one step back in order to take two steps forward.