What Is This 'Roma' They Speak Of? (Now Mini-Preview)

Share All sharing options for: What Is This 'Roma' They Speak Of? (Now Mini-Preview) 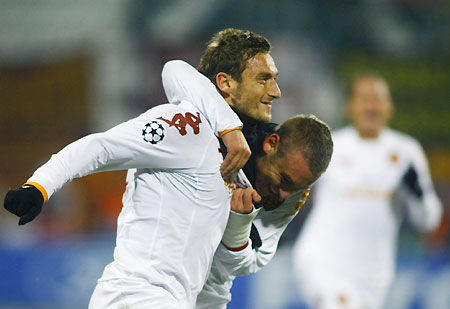 WordPress ate my dog which ate my post and I'm exhausted so it's not being repeated. Here's a summation.

International siesta time is over. All three and a half weeks of it. Daniele De Rossi still plays for Roma - did you know that? Francesco Totti too. Most likely. The bodies are returning, slowly but surely, but after an international break the injury list is still six - seven if you count the lone Italian keeper, Pipolo - deep and that's not exactly wonderful. Yeremy Menez isn't spectacularly healthy, but that shouldn't prevent his magnetism to ground in the event that he plays due to Mirko's slightly torn ass (don't ask, don't tell, etc.). Or something. Marco Motta is back from his suspension for stupidity which means there's a real, honest back four available. And there's even a buffer between Loria and playing time in the form of Souleymane D. Julio Baptista will be available after scoring a goal against someone other than Sampdoria during the siesta. His shot may have bounced off the post and off the back of the keeper into the net, but given his recent form anything hovering around production - intentional or no - is truly special. And Marco D'Alessandro did enough in his brief cameo against Juve to earn another call-up.

As for the game: it's an angry team in a must-win game at home against a relegation fighter after recuperation time. There's really no reason they shouldn't win - unless Bologna has someone sent off, of course.

For my own sanity - and I hope most others did the same - I avoided Roman injury news like the plague during the break, so this is copied straight from RomaNews and I'm leaving it at that. They'll certainly know better.