The Non-Wrap To Match The Non-Preview (Etc.)

Share All sharing options for: The Non-Wrap To Match The Non-Preview (Etc.) 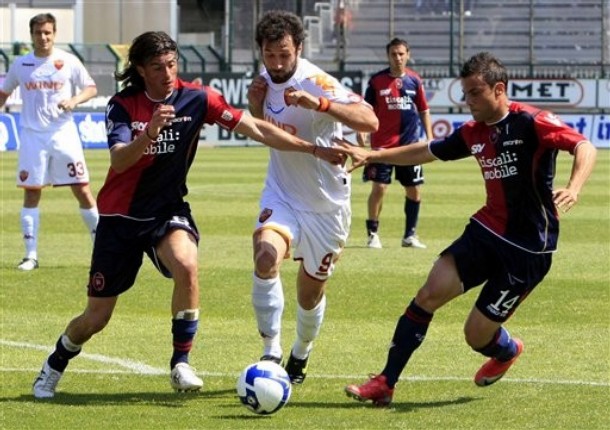 I'd planned to watch the game in the process of writing this post but the gods have conspired, once again, to ruin my Roma watching experience and the file which took hours to download magically contained 0MB. So it's either a liveblog of a Yao-less, McGrady-less Rockets-Lakers or scraping the bottom of the barrel for the news and recapping the Cagliari based on a three minute RAI highlight reel.

All in all the likely result - even if it could've been easily prevented (or so it seems). 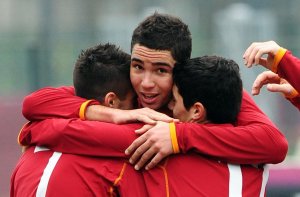 Even though my schedule is beyond busy these days, I still think it's fair to say I'm pretty up on Roma as a whole. And yet I'd still never heard anything about Scardina beyond his name on a Primavera teamsheet. Being lured away by ManU and Chelsea? Never even gave it a thought.

Which sent me scurrying to a disappointingly barren YouTubers. Striker, 17 and apparently gifted enough to garner the attention of England's biggest child poachers. But it won't get that far, as he, unlike Petrucci, will be turning down a quick buck for the chance to play for the hometown club.

“Roma will not let him get away. Scardina will sign a contract very soon. Tomorrow I will meet with the directors and we’ll put pen to paper. I think the contract will be a three-year deal.”

And thus a legend (in the making) was born.

Now, given the obvious talents of Okaka Chuka Chuka Okaka, Marco D'Alessandro and Filippo, it seems the future is looking might bright up front. Until one of them doesn't pan out, that is.

Bottom of the Barrel News

i. Aquilani will finally be having ankle surgery tomorrow and is thus out three months.

He will get a ton of flak for missing more time but it needs to be realized that he was close to a return when he put his personal health on the line to come off the bench for Arsenal, a game where he was clearly in pain and had no business being on the pitch. One which set him back and ruled him out for the season. Thirty minutes for a season. Can't question his commitment to the cause.

ii. I don't like these Andreolli for Motta swap rumors. Not one bit. The team needs more youth quality in the back, not swapping out one for another (albeit one for one who hasn't made his debut yet).

iii. Matteo Brighi & Philou will be staying regardless of the season's outcome. But you knew that already.

iv. I believe I mentioned this awhile back, but I'm far too tired to recall and far too lazy to read back.

I was perusing some articles some time ago when I came across one on Nene of Nacional (Portugal), currently tearing apart the Portuguese scoring charts (19 in 28) after arriving from relative obscurity in Brazil. Upon reading it the only conclusion I would make that at the very least he was 'Roma rumor material' and at the best 'Roma material'. A couple weeks later, lo and behold...a rumor.

The rumors are holding strong. Mainly due to his strike rate, his Brazilian passport, his pricetag, that he's still relatively young (25) and that he hails from that big country in South America.

Good with his head and a nose for goal - but it all remains to be seen how well he'd do against top class defenses. Or whether there's anything more to the rumor than 1+1 equaling 2 - something which seems harder and harder to decipher these days.

Oh, and have I mentioned he's Brazilian? Under €10m and there's a Roma rumor waiting to be written. Should be a splendid summer.