Share All sharing options for: Flying Asses: The Wolf's Meal. 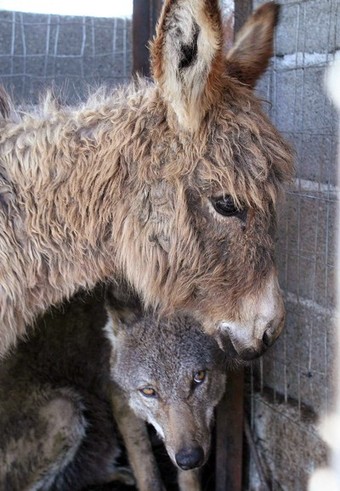 I blindly searched for "wolf and donkey" in Google Images and came upon this highly appropriate photo. And I was feeling comfortable about tomorrow's game. Then I read the caption:

A wolf and a donkey share a cage in the northwestern town of Patok in Albania, about 40 km from the capital Tirana, 15 May 2007. The donkey was brought into the enclosure to be fed to the wolf, which was caught in the northern Albanian mountains four months ago. The animals have since become attached to each other, cohabitating in the cage for the last 16 days, and attracting curious villagers and local media.

Suddenly I'm not so comfortable about a result. The parallels would seem to indicate a card-less draw is on the horizon. Lots of hungry wolves, too.

And it gets worse when you realize that despite being mired in the relegation battle - though with a comfortable cushion of five points - the Flying Asses are better away from home than in the cozy confines of the far north. Chievo actually have more games with points than losses on the road (5 wins, 4 draws, 7 losses) and 19 points away to 15 at home. Go figure that one out.

Luckily two much needed bodies return for Roma, Mirko & Yeremy. They may not be 90 minutes fit but it matters not: Roma needs some technique and pace going forward. Totti's spectacular and Julio's looking good on the left these days, but it's not enough. They need the quality to put it over the top with the great equalizer, the 4-2-3-1, in tatters.

Of course that might not matter if Stefano Sorrentino turns in another performance which has the Great Wall of China blushing. Actually, it's not really all that funny. The game in Verona was positively ridiculous. They peppered Sorrentino with shot after shot after shot and he simply turned them away, regardless of the brilliance. Hopefully he's used up his quota of mind-boggling saves against Roma this year. He must have. Surely. (Please?)

And this goes without saying, but this is a must win. Not for the table or Spalletti's job or Rosella's sanity, but for the players who desperately need to start rebuilding their confidence and the fans who need to calm the fuck down and start treating this as precisely what it is: a sport. No more protests, no more booing, no more living through the athletes they couldn't be. Last time I checked, no giallorosso has entered a fan's place of employment to boo and protest them through difficult times. Go protest swine flu or child abuse or breeding amongst laziali - something worthwhile.

Time for all to return back to that which The Grand Imperial Poobah craves most: tranquility.

I desperately hope the 4-2-3-1 is scrapped for this game. Not holding my breath. Actually, chances are TGIP will probably run out his most beloved and the formation will proceed to trounce Chievo 62-0 as I hurriedly try to remove my foot from mouth.

I suspect both Mirko and Menez will take some part in this fixture, if only to remind fans that they do still, in fact, play for Roma. Other than that...

...it's anyone's guess. Based on recent times there are very few guaranteed spots in the starting XI - which might be a good thing.