Farewell To A Legend

Share All sharing options for: Farewell To A Legend 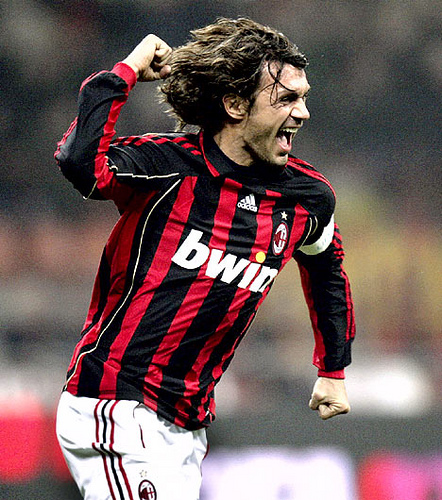 This game isn't about the result, final table positioning or next year's competitions. This is a game where sport transcends itself. Where allegiances are placed aside and you are no longer the fan of a team, but a fan of the sport.

It's often said that there are very few in football like Paolo Maldini, and that is certainly true. But leaving it there is almost criminally shortsighted. There are very few not only in the history of football, but in the history of sport. There are some with a C.V. worthy of bronzing and a place alongside the Bible in the pantheon of papyrus, but how many do it for 25 years without succumbing to such trivialities as age and natural decline? How many do it amongst their hometown brethren? How many match, possibly even usurp, their supreme athletic gifts in the locker room? How many do it with a silent grace that leaves a resounding echo?

Toss every superlative in the world his way and it will never be enough.

I've never met a person with one bad thing to say about Paolo Maldini, and I highly doubt I ever will. Some would say that's the highest praise possible, and they might be right. He is the perfect athlete, the perfect captain, the perfect leader. The one to which every burgeoning superstar, journeyman, recreational player and child should aspire. The holy blend of ability, integrity, professionalism and class - on and off the pitch. The man every man wants to be and every woman, well, the less said the better.

I've read conflicting reports as to whether this will be his final game. Bowing out at the San Siro could be considered nothing less than appropriate - but then that's not Maldini. Milan still have business to attend to and a fixture to win in Firenze, which leads one to believe he'll say his final farewell a bit south of the San Siro doing the same thing he's done for 25 years: lead Milan to victory.

Whatever the case, tomorrow is Maldini's final game in my eyes. Paolo Maldini is Milan, and the moment he begins his historic lap around the Meazza, his career will have been capped in perfect fashion. A truly special man achieving the remarkable accomplishment of bringing every man, woman and child in attendance, watching on television or peering down from above, witnessing one they let get away, to tears.

So today a little piece of calcio will die. The part with precision tackling trailed by hair which floats in the air like a smiling willow, for example. (Weeping willows perk up for Paolo, don't you know.) Or the part with positioning that makes a textbook blush in envy. Or the part defined by a blue-eyed gaze which tells a teammate more than a thousand words. Each of which we'll undoubtedly be privy to as Paolo continues his age-defying act one last time.

To watch Paolo has left me feeling fortunate and humbled. The athlete whose lore you pass on down through the generations. And for that, I'll readily admit I won't begrudge Maldini a victory in his final ever home game - Paolo deserves at least that - and I'll even say I won't be a Roma fan on the day. Today, as ever, I'll be a Maldini fan. These days, just as with Paolo himself, come along but once in a lifetime.