The Fastest Thing To Hit Serie B Since Juve's Reputation & Rubber Biscuits.

Share All sharing options for: The Fastest Thing To Hit Serie B Since Juve's Reputation & Rubber Biscuits. 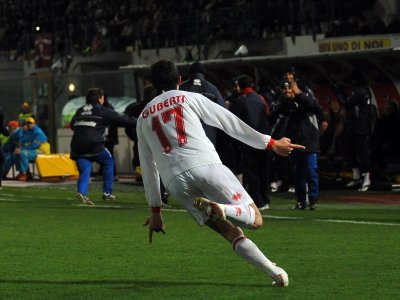 It seems the worse things get the more rumors hit the pages, which would make sense to some (sensationalist) degree. Weeding through, there seem to be only two worth mentioning right now - two which have been reported as "done deals" and neither involving ownership. Fancy that.

And who wouldn't want it to? A young, skilled Italian (that means he's not Brazilian) winger with bags of pace, a quick-trigger right foot and an eye for goal who's on a free for a relatively modest salary and has been declaring his love for all things Roma for decades now? Where's the downside? Bedrock-low risk, high reward.

And maybe Spalletti, if he stays around, can injure Guberti rather than some of the players for which the suits have actually paid a fee. And maybe Vito Scala too - just to show him how it feels. And Prade, for buying all these injury prone players who weren't injury prone until they showed up in Rome. Wouldn't that be splendid?

Speaking of healthy, the attacking options for the wing of Vucinic, Menez and Guberti, with Taddei the great balancer, would be just as splendid. Quite a bit of technique in that lot and some pace that doesn't come from fullbacks or fans running out the door.

But let's not get ahead of ourselves with this whole "health" thing - not even Make-A-Wish could grant that one. For now, just take a look at Guberti's day last weekend (0:45 and on).

The. Greatest. Goalkeeper. Of. All. Time.

If the two games against Chievo this year are any judge, Stefano Sorrentino should supplant Doni at Roma, Buffon in La Nazionale, Iker Casillas for Spain and Petr Cech for The Artist Formerly Known As Czechoslovakia all at the same time. The fact that his C.V. reads Torino -> AEK Athens -> Recreativo Huelva -> Chievo Verona leads one to believe he is either the most underrated player in the history of sport and underrating or the games are something of an aberration.

In the last four years, including those two games against Chievo, I've paid attention to...ummm...two games he's played in. Therefore I can't say for sure, but I'd guess he's more like Baptista every time Julio sees blue kits with white rings. (Though a bit more impressive since goalkeeping involves fewer matchups to exploit and more natural skill and intangibles.)

If you'd believe the papers - I don't by general rule - Sorrentino is in the bag. This I doubt, because whatever happens with Doni likely resides on the coach next year, something which, even for the most ardent Spalletti supporter, is surely levitating, if not well up in the atmosphere.

Still, wouldn't be shocked if he's brought in either as a replacement or competition for the Brazilian melon - might push him into paying attention once in a while.

i. Ricardo Faty, who would do well to gain a few and write the nickname for us, has returned in Rome after his contract wasn't picked up by Nantes, who may very well be relegated to Ligue 2. I wouldn't call that the most glowing assessment of his skills.

Actually, that's not fair. Considering they might be relegated it's altogether possible he either refused to sign or they decided now isn't the best time to be spending cash they might not have.

Still, down goes The Next Patrick Vieira #2,781. (Thankfully - who wants a clumsy card-machine tainted twice over?)

ii. Cicinho says he'll be ready for ritiro in July.

Applauding his optimism, still planning the welcome back party for October or thereabouts.

iii. Julio Cruz: Impressive goal rate until this year (2 in 15 Serie A, 3 in 21 total), yes. Do you trust the merits of all those goals the last few year given his team? Nor I. And given the downfall, is it worth risking a max salary on a soon-to-be 35 year old? Nope. What's the point of having two Montella's on the books?