Share All sharing options for: It Was All About... 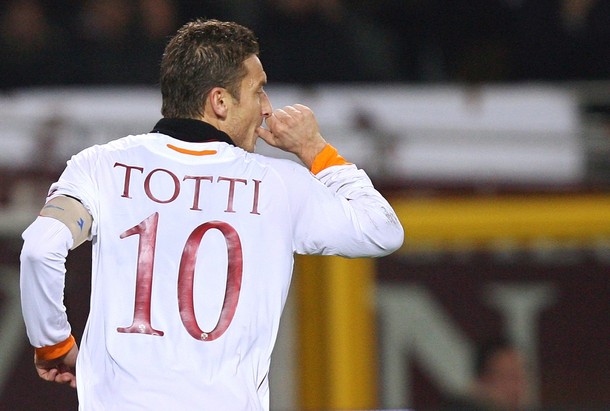 This is what the preview began as before my laptop lost an epic battle with a bottle of spring water and I missed the game - if only to relive one of my favorite meaningless moments of the last few years.

The last time Roma went into the final day of the season with nothing but pride and Francesco Totti's individual goals to play for, it wound up 4-3 and Francesco with his desired achievement in tow.

That game was Messina on May 27th, 2007 - not so long ago. Roma had second well sewn up (with Messina long relegated) and Francesco was battling Ruud Van Equineresemblence and Afonso Alves for king of goals in Europe. So what happened? Francesco got his two and a shiny golden trophy in a game which could've been played on hardwood.

But funnily enough, I don't remember that game for Francesco's goals. I remember it for Christian Rigano, of all people. Not for his two goals, but the penalty he conceded to, who else, Francesco. With 15 mins or so left and Francesco needing a second goal for the title, Rigano brought down Francesco in the box. Only it wasn't just a ticky-tack penalty - he might as well have thrown on a cowboy hat, picked up some rope and lassoed him down with the strength of a thousand men (which the mason does have). It was such an incredibly obvious penalty you'd have to think he did it on purpose....an incredibly obvious penalty days after he'd been linked to and voiced his love for Roma in the presses. One of the least subtle "come and get me" pleas in recent calcio history? Mmm hmm.

And I love Rigano for it.

Totti missed the penalty but got his second, and the title, minutes later. And Christian Rigano went to Levante, where he became a pro bono footballer before returning to the dungeons of Italy.

Back to Torino: I expect this game to go roughly the same. That whole defense thing? Out the window. Torino - or whatever shell of a team wearing granata kits will be taking the pitch - have to press for goals because they're in deep, deep shite. They're equal on points with Bologna, but BFC holds the tie-breaker. Thus il toro have to take more points than the Rossoblu tomorrow - win v draw, win v loss or draw v loss. And Bologna are hosting Catania, who are typically rubbish outside of Sicily (and Rome).

Long story short: chances are not good. So they'll be playing like their lives depend on it. Which it does.

And this is what turned out:

The number 10 is the number 9 for three months. How fitting.

And thus ushers in a conclusion which is so desperately needed. Beginning the Summer O'Drama...now.