Share All sharing options for: Tuesday Briefs: Rumors From Distance. 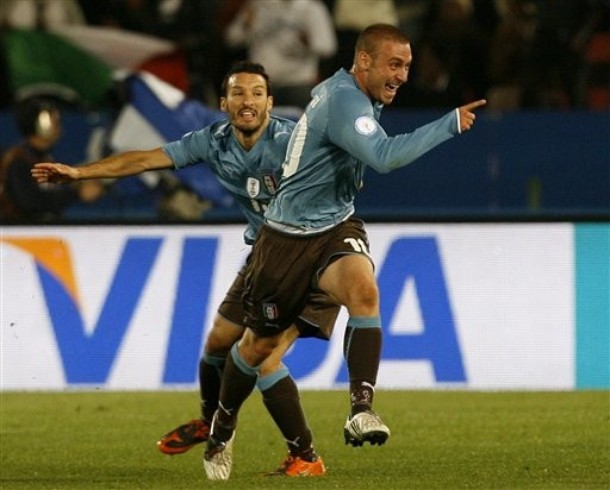 For those who missed DDR's goal yesterday....

Stefano Guberti: According to various sources Stefano Guberti has finally agreed to join Roma on a four year deal as The Closer, Cristina Mazzoleni, was present at the meeting. And when she's there, money's going to change hands.

According to me it's about @#$%ing time.

Actually, that he was on vaca and only returned back Monday is perfectly legitimate reasoning. I'm just sick of hearing his agent run his mouth. I pray he and Brighi's agent don't merge into some supertwat.

“We had talks with a Roma delegation last week in Carinthia,” his agent told Krone.

“Roma want to wait for him to recover," he added. "It is understandable that they don’t want to buy an injured player.”

I saw this name and immediately did a double-take: why, for the love of Francesco Totti, would they want a fucking animal like Pogatetz? Particularly when they've just gone through their teenage rebellion indiscipline phase.

And then I realized why they, most notably Spalletti, would want him: he's a fucking animal. No quit, never say die, never give less than whole body parts. In short, he's anti-half the Roman squad. Go down 4-0? Fine, he'll turn up the fire. 5-0? If he's going down, he's taking bodies with him.

I think there are a few glaring worries - namely the Serie A transition which, as we saw with Riise, takes time for defenders from the Prem - but you get the feeling Roma could desperately use a guy with his mental makeup.

At least until he's charged with second-degree homicide for a tackle that has Macellazzi blushing.

And as you'll hear so very often when looking for some defensive depth this summer....he can't be worse than Loria, right?

“There was a contact, it’s true. And negotiations should kick off over the next few days. Don’t let me say more."

“I don’t know anything yet. I am an Udinese player. We should just wait. A lot of things are needed to come to an agreement. We first have to talk with Roma and Udinese. It’s a great pleasure to feel appreciated by big teams and it’s even more so when this big team are Roma."

This confirms two things for me:

2. Sending 'fringe Romans' - those who may eventually blossom but aren't quite ready to break into the first or second teams (that's you, Galloppa) - out on co-ownership or sale isn't a terrible thing. In fact, it's just the opposite. Pepe became the player he is through playing time on (slightly) lesser sides that he wouldn't have gained at Roma or bouncing around on loan year-to-year.

And though it's not quite a confirmation, it leads to one strong rumbling: this could be the end of Rodrigo Taddei at Roma. Going back to the 4-2-3-1, that's Vucinic/Menez for the left and Pepe/Guberti for the right, with Simone simply being the rich man's Rodrigo (and plenty of emergency cover in the form of Cassetti, Motta & Cicinho).

It'd be a sad day for how much he's meant to the squad and his passion for Roma, but it's been two largely forgettable seasons in a row for Rodrigo.