Share All sharing options for: The Roman Season End Awards 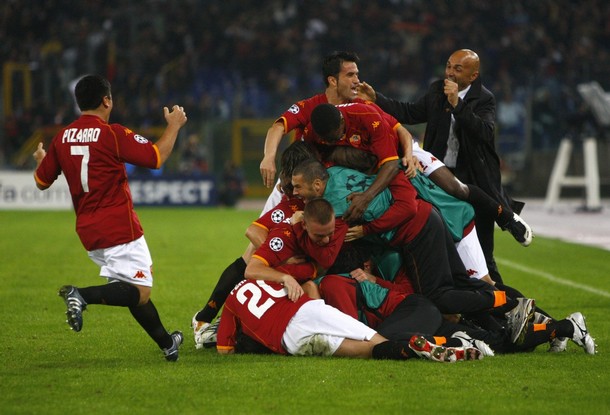 Player of the Year: Did you know Mirko Vucinic scored two more goals than last year despite playing thirteen less games? Did anyone else notice how critical matters in the back became when Juan moseyed on over to his spot in the stands? Did anyone make note that if you remove the 4 games after Francesco returned from his ACL tear and the 5 games in February where he was injured but played because Roma had no other options, Francesco scored 15 goals in 21 starts? That's a pretty decent clip, you know.

But even considering the marked improvements the health of these three players brought to the side, there's only one candidate for Player of the Year: 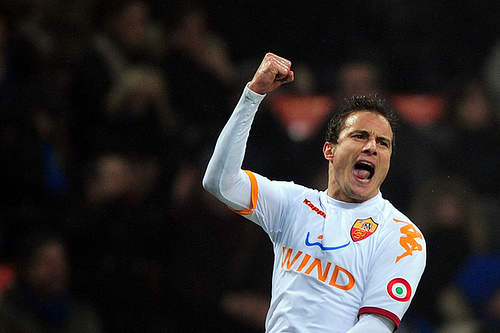 Ask yourself where this team would have been without him, particularly during the most difficult times, and we should be lavishing praise upon him til 09-10 opens. Factor in expectation and they should be erecting a nude statue of his likeness out of marble just outside the Olimpico - an honor he would graciously decline.

In 07-08 Matteo Brighi was nothing more than a part-time role player - a role he performed very well, but a role player nonetheless. Late in close games it was his duty to run around Perrotta-style - chicken/head cut off - and provide defensive energy to contain the midfield, aid the defense and simply make life a living hell for the opposition. After the Napoli 4-4 Spalletti said something along the lines of "My greatest mistake was not bringing Brighi on earlier" - a pretty telling statement when you consider all that went wrong in that game.

Fast forward to September of last fall. Through injury, he'd gone from part time role player to necessary starter after a summer which had linked him to Celtic and Blackburn - not exactly the cream of the crop. It took a bit for him to completely find his legs, and you could certainly make the argument that no one benefited more from the switch to the rombus, but when he came good he just didn't 'step up' - he turned into a star. Forming a two-man vacuum with Daniele De Rossi and allowing Roma to finally do that one thing which had so defined their success in recent years: own the midfield. And with his rise so came Roma. No coincidence. Plenty of players helped and the formation put in the effort of a hundred men, but Matteo was the difference. No one had transformed Roma more than he - not even Him.

First it was in the Roman half, winning balls, closing down and continuing to invoke nightmares for attackers. Then, slowly but surely, he started to drift forward. He started making runs into the box like Perrotta's fraternal twin - and he even booted a few as though he shared Simone's DNA as well. And with those runs came some goals. Important goals, too. Guess who jointly led Roma in Champions League scoring this year? Yep. Three goals tied him with Mirko.

There were some bumps along the way - the season was far too difficult for anything to go smoothly - and a great deal of it coincided with Spalletti's ill-advised return to the 4-2-3-1, but there's little argument that Matteo was Roma's best player this year. And all the while he did it in typical Brighi fashion: quietly, humbly and efficiently. Stars don't make teams - it's players like Matteo who transition bad to mediocre, mediocre to decent, decent to good and good to great....and then become stars in the process.

And his Wiki proves a must-read for any prospective footballers in the crowd. Or anyone, for that matter. Class act on the pitch and off.

'Keeper of the Year: A Brazilian.

Let's be honest - not a whole heap separated Doni from Artur this year. Artur was less mistake prone...for awhile...but Doni is more gifted and thus could get to more balls.

I'm calling it a wash and doing a Curci dance.

Juan would've had it on influence alone were he on the pitch enough; Motta began making too many mistakes towards the end and he still was only here half a season; Mexes just quit when he saw Loria alongside him; Marco Cassetti playing centrally is forcing me to consider removing his tattooed silhouette from my left bicep; Principessa Panucci did more damage off the pitch than he possibly could've done on; Cicinho's knees have been on the shelf for half the year; Max Tonetto played roughly three and a half games total; Simone Loria is....ugh; and Souleyman Diamoutene was lapped on the CB depth chart by @#$%ing Cassetti.

So Riise it is. A bumpy start but he came good and even shouldered this team on occasion, playing beyond well in the most important game of the season

Midfielder of the Year: See above.

Forward of the Year: Who else? Francesco.

Biggest difference maker in calcio. Full stop. A handful have the skills, but no one has his genius.

Brazilian of the Year: 'Tis Juan. Clone and then ship his doppelganger off for medical research.

Or perhaps Filipe given his rock bottom expectations?

But this, unfortunately, points out how poorly this year went for the Brazilians as a whole. None were poor, but they weren't really playing to potential, either.

Coach of the Year: Marco Domenichini.

What? Roma went undefeated with him at the helm.

Three spectacular goals capping a complete Roman performance: the vintage fluid attack culminating in Cicinho's goal, the world-class defending which completely nullified Diego Milito, the fight when down to ten men, the debut by future star Marco Motta, the genius of Daniele De Rossi, Mirko's supreme technique, Julio's golden right foot and, just to make sure we hadn't forgotten which season it was, the catastrophic-looking injury to Cicinho about 30 seconds after his brilliant goal.

A stern reminder of just what this team is capable of when healthy and leaving no doubt as to where the blame for the season resides.

Close second: the 3-1 dismantling of Chelsea.

Goal of the Year: It wasn't even the most eye-popping goal of the game, but it was quintessentially Roma.

Celebration of the Year: There can only be one.

Shithead of the Year: Simone Gloria.

This comprises worst player/worst buy/biggest Neanderthal/ugliest dude. And I do genuinely feel bad for him - it's not his fault he was thrust in well over his head - but I'd like to sympathize from afar. Like Serie B afar.

The ZOMG!!!! ZUper ZtAR!!!! Award (Best Youngster): Considering this is Serie A, best youngster would have to go to anyone under, errr, 22?

Motta's 23, Yeremy is 22, Filipe is 22 and Pietro Pipolo is rubbish. Which leaves Marco D'Alessandro, Alessandro Crescenzi or Riccardo Brosco. The latter because he spent the most time on the bench.

D'Alessandro by default, I suppose.

Time for a youth influx? Yessir.

Weather of the Year: The first Samp game. 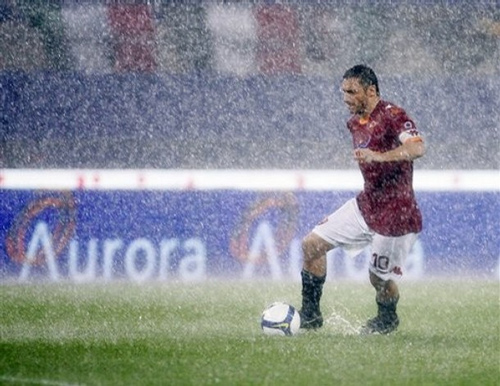 The quote which pops up once a month:

“I would like to stay, but I would also play more. We’ll see what happens.”

Dude....get off the medic's table.

The Christian Wilhelmsson Award (Target of my irrational hatred): Yeremy.

I'm torn. On one hand he's so supremely gifted Spalletti, Conti and Prade should be building the attack around his pace and technique for the next ten years.

Next year will be make or break for him. If he progresses appropriately and somehow rids himself of this soil magnetism, he'll be alright in my book.

But dude...eat a sandwich, get a haircut, smile once in awhile - you play for @#$%in' Roma for crying out loud - stop channeling your inner Nedved, sit down stand up and shut the @#$% up.

Worst Hair Award: It's a toss up between Yeremy's end of the year coif and everything Stefano Okaka Chuka did between August and January. 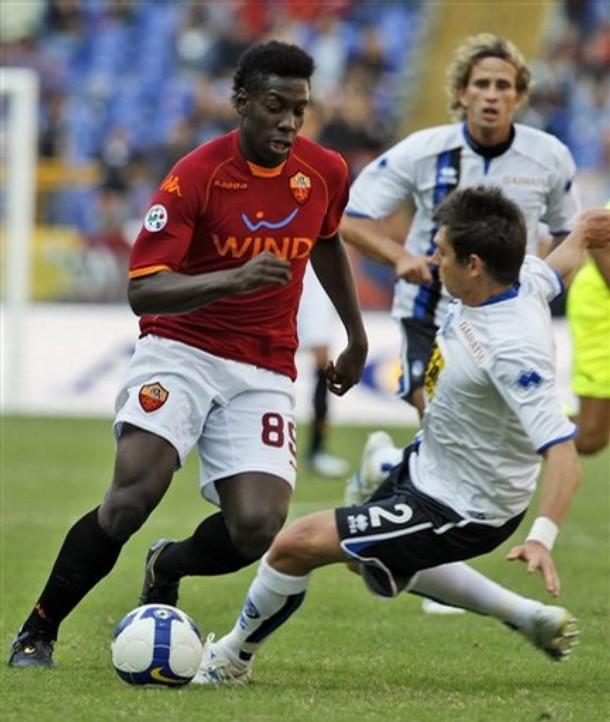 And Google Images declares a winner.

And so begins the season where I waste time with year end garbage until Spalletti steps down.