No Rest For The Weary & Insane - But Some For Vincenzo.

Share All sharing options for: No Rest For The Weary & Insane - But Some For Vincenzo. 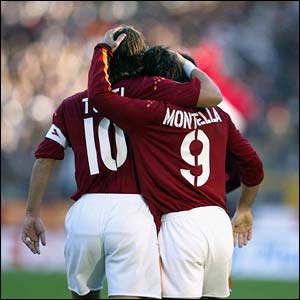 Did not see it coming, yet unsurprised all the same, as looking back all the signs were there. Vincenzo, like everyone on the roster, battled through his fair share of injuries this year, but the difference is he's been doing it for years and it'd clearly taken its toll. The chances he'd have buried just two years ago were skied over the bar or hit weakly into the napping keeper's arms. The legs were going and at 35, he was clearly in the tapioca pudding stage of his career.

After it was clear this season was going nowhere fast - at least not without the hasty transfer of a miracle healer - one of my great hopes was just one more goal for Montella at the Stadio Olimpico. That's all - and one which probably wasn't much of an ask, given his qualities in front of the net. Unfortunately he didn't get it - not unless you include his stutter step against Arsenal in the PK's - and that's probably sign enough that his career was over. The chances were there to be had, but he could no longer bury them. The lone indication it's time to walk off.

His place in Roman history is a strange one, as his prime was often interrupted by injury and that Capello clown. A guy who probably could've won a couple capocannoniere titles goes down, somehow, with only three double digit goal totals this decade, all three, of course, with Roma. And this, I gather, is where the place in hearts supersedes that of his place in history. We all know what he could do - what he did often - and just what might have been. Still a wonderful career, one countless players would dream of, but his legacy could be more, should be more. And for this I've always had something of an extreme soft spot for Vincenzo - more so than most. Too often a victim of circumstance, occasionally his own, yet one who still made the most of his chances until time had gotten on. There's little more one can ask of a professional athlete than to stand up and be counted when called upon, and he certainly did that.

Great Roman, but it still feels like - through no fault of his own - there should've been just a bit more. Hopefully that'll finally arrive through in the next bomber he brings through the youth system.

Return of the Hospital Ward

Speaking of things I find somewhat surprising...preseason? Already? Am I the only person that this bothers slightly? This is a squad annihilated by injuries in a season defined by those who were off the pitch rather than those on, and Roma is the squad with the shortest break? Fitness was never the problem so this hoists up all those Spalletti red flags once again.

Of course we're not there and we can't know precisely how hard they're being worked relative to fitness levels - and it's half the team at that, with many off on holiday after the Confederations Cup, U-21 action and/or injury. But I thought last season was a lesson in taking things scaling things back, not running players into the ground - particularly not during the summer heat - and genuinely trying to incorporate that whole "refreshed" thing into the system. Tactical genius can do wonders, but so can't a squad full of healthy players who are playing at 100% rather than one hobbling in at three-quarters.

My optimism for a healthy season has suddenly hit the shitter.

So I take it everyone is off the Fioranello bandwagon? How could anyone possibly advocate a group dumb enough to employ a lawyer - Nicola Irti is his name - whose IQ looks up at mental retardation? You want to endear yourselves to the Roma fanbase and yet you attack Francesco Totti? How daft must one be?

For those who've missed it, the final nail in the Fioranello + Friends coffin via Irti:

“The Giallorossi population must stick with me, because they have suffered too many injustices over the past three or four years. From Totti too. That’s my opinion. Shoo! He is ruining you! He is ruining you! Just like Real Madrid need to do with Raul, Roma need to get rid of Totti. Is that clear?”

I take it this is the last time anyone will blindly back a potential sale despite knowing absolutely nothing, eh? The grass ain't always greener.

And I also gather we can deduce that Francesco is anti-sale (long assumed). So who's arguing with Totti? Really - who? Stand up and be struck down you blasphemous souls.

Speaking of unsmart things, one has reportedly been undone - all the way to Torino. And with this undoing comes a glorious, glorious gift... 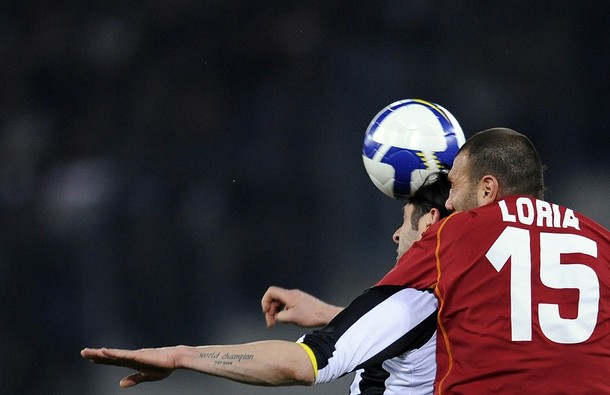 ...the back of Simone Loria.

Of course the one game from which I can find a photo of Loria's back comes is when he scored a goal. I swear, man...

Roma is most certainly not for the faint of heart - or feint, even.