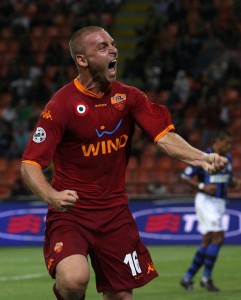 GAME Deservedly won and an easy trip to Belgium next week should be on the cards.

Gent are absolutely defeated. Now would be a good time for 4. Cerci shows a burst and Roma win yet another corner. Phoul on Philou.

Cerci with a couple of nice ideas to play in attackers, but his touch fails him.

90' Both teams look content to play out this scoreline.

89' You know, with some more clinical (ahem...midseason) finishing and luck in the first half, this game is 5 or 6-1 easily.

88' Cassetti on for someone - missed it.

Also, some brilliant play by Pizarro to setup Mirko for his 1v1 with the keeper. Really - brilliant stuff.

Not. For. Sale. And dear god does he look fucking ridiculous these days.

84' Mexes makes a nice little turn to buy some space after saving a Gent ball....while actually playing in a defensive position.

83' Mirko and Francesco try to dazzle the Gent backline into submission; fail.

81' Another baldie on for Gent. Team bonding, I presume.

79' Gent serve up the 3-1 to Totti on a silver platter but their keeper, again, saves the day. Slightest of tips wide, which the ref didn't see.

78' And Mirko looks like he's in the early stages of bringing back the rat tail.

This team needs three things: a CB, a doctor/someone to talk some sense into Spalletti, a hairstylist. Then we can call it a mercato.

Mirko time. On for Okaka Chuka, who wasn't, shall we say, fabulous.

77' And I'll say that penalty was very "debatable", but the red wasn't. Easy as pie for the referee to make.

76' This has been an incredibly physical showing from the Belgians, but you expect such when a small team comes to town.

Thompson clips Cerci from behind as he skipped past him, second yellow, that's a red. Roma v 10....God help us all.

72' PENALTY! Totti taken down in the box on the free kick. (Very soft call.)

71' Motta manhandled, yellow for Mbaye, who would blend well into a starless night.

69' Goober lays another ball into the center but too many blue bodies in the middle for anyone to hit it into the back of the net. Helluva chance. DDR then rips one from distance, no dice.

(That may or may not have been Goober. Given the stream, it could've been Winston Churchill for all I know.)

68' Clusterfuck in the Roma box, Artur left out and Tonetto's put a ball destined for some wood out for a Belgian throw.

Alessio Cerci for Rodrigo. No real question what this sub is designed for.

65' Motta goes in a bit too late wielding flames, and forces #14 to stop, drop and roll.

63' Cheeky work by Okaka & Taddei in the box but the ball to Francesco is intercepted. There's a clear surge in quality here - none more evident than that coming from Rodrigo.

62' Mexes leading the line, dribbles out for a Gent goalkick.

I mean really, what the hell is he doing today?

59' Goober released but the angle is tough and he cuts it back to no one. If nothing else, his pace will be an incredible asset.

58' Goober again makes himself some space and slays one in to Okaka, who puts it just wide from about 1 yard off the post. I smell a quick second.

Mexes threw a helluva screen on that goal, jumping over the ball (well onside) to let the ball through before the keeper had time to act.

54' Totti clipped outside the box for a free kick from 20. Missing La Bestia here for a moment....

51' Gent results in nothing, but they're going to have to tighten that up soon or it'll be eaten alive by a good team.

49' Mottha shot saved by the keeper, who's having a day, and Pizarro's shot is blocked. And my stream just rang.

Taddei's been much improved in this second half. The inevitable yellow for Maric.

48' Sort of missing that midfield which made Roma so great. Obviously a few of those key components aren't on the pitch, nor is the formation, but you'd like to see a bit more.

46' Appropriately....CORNER ROMA. Taddei clipped on the line of the box. Way too soft to be a penalty, so it's a free kick just outside.

Roma have positively dominated the half, but can't put the ball in the back of the net and the game was apparently scheduled during the naptime of John Arne Riise.

45' MBaye, goal scorer, is released again but the ball is a bit short. This central defense needs some smelling salts.

44' Totti yellow for diving when he tripped on the other guy's heels. Not a penalty, but never a yellow.

41' If Gent wasn't rubbish, this would be 2-0 right now. Because Roma's central defense is.

Well, not rubbish, but Philou is playing CF and Riise is a left back playing all alone in center.

Do you think this is by design so that Spalletti gets that big center forward he so desires?

Goober hammers one which is destined for the corner of the net, but tipped wide. CORNER ROMA.

34' Goober positively roasts his defender and his shot from inside the box is blocked again. This kid has some skillz.

33' Totti is kneed in the arse, which is apparently legal.

32' Okaka bundled by Maric, who looks fresh out of the latest Pusher sequel.

30' Another corner results in Mexes heading yet another over. I'm chuffed to bits that he's finding the ball with such regularity, but put one of these in Philouppe.

29' Guberti 1vv1 with a defender but his shot is blocked and he's upended. An eventual 25 yard free kick from with Riise slobbering over the ball. DDR goes in for it instead, well high. #10 on Gent received a yellow back there somewhere.

28' Why is Mexes shadowing Totti? What is this fuckin' 3-4-3 formation going on here?

Also, I'm fudging the time if you hadn't noticed.

27' Great awareness from Pizarro to play a ball rolling out for a goalkick short to...Totti maybe?...and keeping the attack alive rather than hoofing it into the center.

26' Artur saves 2-0, the boos begin thundering down from the stands.

25' Mexes heads a sure chance at goal high. That spiky hair is really fucking with his accuracy.

Artur had no chance due to the swerve on that cross.

Right back down the other end, corner #3,712 for Roma. Scooped out of the air.

23' Ummm...1-0 Gent. Which I missed because I was too busy worrying about the heat. Wow, Riise just let his man roam free for a header from about 3 yards.

21' Some roughhousing going on that results in a Gent free kick and Taddei looking sheepish.

20' Yet another corner. One of these is going in. Not this one.

19' A loose ball in the box and Mexes was damn near freed 1v1. A corner occurs before Riise decides 40 yards is well within his range. It's not.

18' The season has officially begun: Francesco clipped from behind.

16' Goober doing some work all by his lonesome but his ball onto the onrushing Tonetto goes just over the line before Max's geriatric knees can get there.

14' Another free kick from beyond shooting distance....except for Totti....well wide.

12' Dare I say, Gent are getting a few too many lanes into attacking positions.

11' Long free kick from Pizarro into the box headed up and over for a corner....goal kick off the very fashionable Philou.

10' Long ball to Okaka - where did Panucci come from? - and the rebound lands to Francesco who rips a pass back to Stefano at the spot. Stefano can't hit it. Boo.

9' I wouldn't say they look in preseason form, but my shittastic stream tells me they're looking like an actual football team, which is something.

7' Damn near a phenomenally acrobatic goal by Mexes, who looks like he just woke up from a three day tryst with Vidal Sassoon.

6' Okaka goes with the lesser of many evils in some cornrows. Well done, my son. Roma corner won by Goober.

5' Early corner for Gent, who have enough big bodies to make you worry a bit. Fortunately the cross was rubbish and Motta hits out on the counter, with no success.

3' Okaka does some nice work to put Guberti into a position to dribble in the box but Stefano soon learns 3 v 1 does not typically bode well for the 1.

2' And Guberti rips his first shot in the Kappa just wide of the post.

1' Guberti is FAST. That's what I got from the first minute. Damn fast.

I think I, along with most, am looking forward to seeing Guberti more than anyone else on the pitch. Finally see what the hype was all about.

And here we go - on the pitch to Roma, Roma, Roma under the (slightly dimmed) European lights.

Mediaset is currently on minute 29of commercials. Another couple and it should be gametime.

We're coming up on 2045 CET. StreamerOne, the only link I see, is currently showing a bunch of actresses, which is strange as Yeremy isn't on the pitch today.

Atdhe is now up.

Precisely what was expected.

Streams are looking quite thin, so this may be a dodgy one. (Europa League 3rd round qualifying? Never.)