Share All sharing options for: Daniele Introduces Some Notes 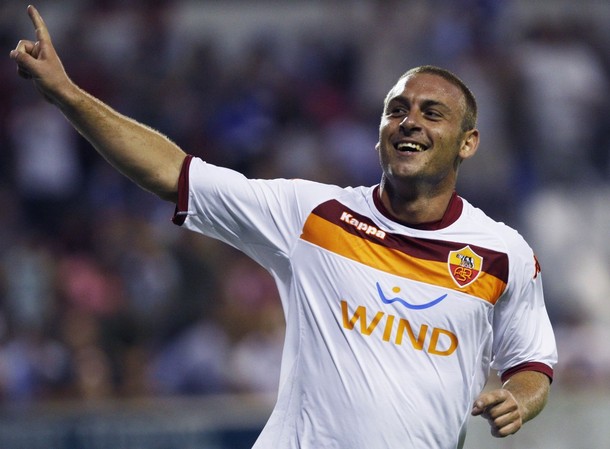 This picture is of no significance whatsoever, but was nonetheless deemed worth. Moving on.

Stealing shamelessly from the comments (fortunately my own):

Someone start rattling off Spaniards who’ve been great successes in Serie A recently and then tell me how desperately Roma needs Negredo and what a monumental failure it will be if/when he lands elsewhere.

Last thing need be said about Alvaro Negredo in these murky waters.

If you haven't heard, Diego Lugano has stated he will sign with his new club on Sunday. That new club is rumored to be a gaggle of inbreeds from over there. However, given Diego's wage requests, Lazyo would risk a freakin' mutiny to pay his ransom (remember what Rocchi was making the year before last - less than a million I think?), while he's right above Roma's ballpark but not beyond reach. This could be good. This could also be slightly worrisome, because AS Roma needs a CB - desperately.

After watching The Riise Experiment and Philou play a 90 minute ode to indiscipline against Gent the first leg round, I was ready for a good central defender to spell Juan when Juan is Juan. But upon settling down, there are a few holes in this Lugano theory.

Diego Lugano is a card machine, not unlike Sir Philouppe. And part of what has made the Chivu-Mexes and Juan-Mexes partnerships so successful is that the non-Mexes is such a composed, calming influence - the yin to Philou's yang, if you will. Add Lugano to the mix and suddenly we have a Mexes-Mexes partnership - Big Bang Pt. Deux. Two clinically unstable central tanks who enjoy antagonizing the opposition and seek controversy at every turn. That, unfortunately, is a disaster waiting to happen, and would lead one to think Spalletti, particularly post-Gent, would want to avoid such pitfalls and thus Lugano, who would most assuredly be alongside Philou the grand majority of time. And thus they'd be thinking more along the lines of a suave Juan than a beast of a man who will clatter into attackers with devious intent.

But then the Burdisso rumors came and I haven't the slightest idea what to think.

I also get the lack of appeal: he sucks.

I get it, and yet I don't. And given the Lugano situation, I've decided Spaletti should play a 3-2-3-2 (Mexes with two fullbacks) and win every game 7-6. Striker in, mercato over.

Stefano Okaka Chuka will be staying put in Rome come September 1, per his agent.

Stefano Okaka Chuka will be loaned out to Chievo come January 31, per me.

And in honor of John's goal, the Milan highlights from late last year: