I Miss Those Oompa Loompa Bastards.

Share All sharing options for: I Miss Those Oompa Loompa Bastards. 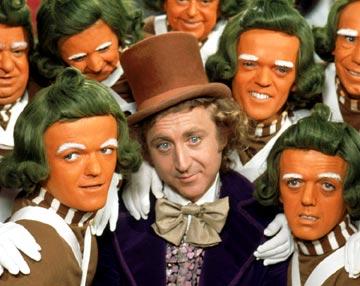 Short people scare me. I'm not really sure why - perhaps it has to do with carnival rides - but they do.

Despite my fears, I've come to something of a conclusion that they are necessary oil of evil which kept this team pumping to its scudetto hunt throughout 2007-08. How did I draw this conclusion, you ask? Well let me tell you.

As you can see, the only real person in that list is Juan. (Real person defined as living organisms over 180cm.)

And voila - all real people.

To further confirm the theory, breakdown by similar position:

Need I say anything else? Those bastards were magically delicious.

Therefore I don't want Alvaro Negredo or Roman Pavlyuchenko or Diego Lugano. No. I want Franco Brienza. I want Maximiliano Moralez. I want Pablo Piatti. I want Seba Giovinco. I want Javier Saviola. I want Gary Coleman, motherfucker. Throw in a smurf and the European title is Rome bound.

(There is a serious theory in here somewhere, but I'm not in the mood for such nonsense as thinking.)

Could an international week friendly against a mid-table Serie B side without your biggest guns be any more underwhelming? Sure, so long as Rodrigo Taddei and Marco Cassetti are your goal scorers.

Fortunately, there are no highlights (yet).

I suspect he wasn't willing to risk the embarrassment of a caught dive against a Serie B squad in a friendly. I'm still not sold. (I'm sold on his footballing qualities; I'm just also sold on his Nedvedian qualities.)

"We are prepared to wait for Roma for another two or three days," Camano told Il Corriere dello Sport.

"[Sporting director] Daniele Prade knows that, and he also knows that the player's wish is to play for the Giallorossi. Negredo would be honoured to play for Roma.

"But Real, in light of the offers that they have received, would now prefer to sell him. So now Roma must enter the race, and begin negotiations with Real Madrid's directors. However, they must buy him."

While I certainly respect his wishes, I also ask him to respect that Spaniards are garbage in Italia*.

* - There are, however, some Spaniards deemed worthy of exception: David Villa, David Silva, Santi Cazorla, Eva Gonzalez, half of Barcelona, etc.

Odds on Christian Panucci's pride testing positive for performance-enhancing drugs within the next two years? 7/1 in year one, 4/1 in year two?

There are two names regarding this striker I think we should pay attention to for the next couple weeks plus:

I suspect signing Sheva is the only way a Ballon D'Oro is going to make its way to Rome anytime soon. [Francesco cries.]

And the potential signing I'm thinking is much more possible than is being talked about in the presses...

Though simply imagining his injury proneness in a Roma kit is enough to make me wish for a slow and painful death via whatever disease it is his girlfriend gave him instead.

...on second thought, are those a package deal?