Czechoslovakia Is No Fun.

Share All sharing options for: Czechoslovakia Is No Fun. 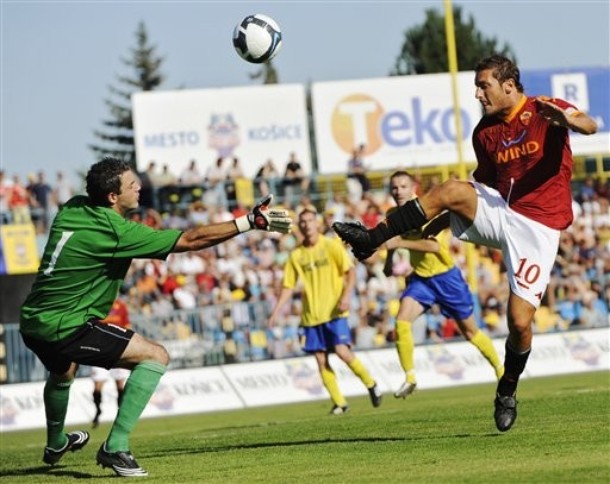 In honor of the Mancini rumors....

You know, it might be worth bringing Amantino back for that alone. I kinda miss wondering if a highly paid professional athlete will show up to work like it's a colonoscopy with Edward Scissorhands' Tourette's-afflicted cousin.

But unlike Alessandro Fai-whatever, I don't blame them this time around. There's a much more important game in three days without a whole hell of a lot of wiggle room in the injury department (again). I expected them to roam around like cows in a pasture, and that they did. No loss.

No win, either, of course.

Artur: I can't hang the goals on him. Penalties are never the goalie's fault, the first was unstoppable and the third a deflection. Toss Doni in there and he might stop one, but that's why he's the starter when healthy and Artur ain't.

Motta: It wasn't an awful performance, it was just that he was thoroughly embarrassed on a few occasions - and by Slovakians no less.

The quicker it's removed from everyone's memory, especially Marco's, the better.

Central defense: Marco Andreolli hasn't been impressive, nor has he been worrisome. Sounds perfect for a 4th 3rd 2nd defender.

And, to be honest, I feel a little bad for the pairing. They weren't awful, they weren't even bad; it's just difficult to do your job when opposing attackers are picking up steam with unchallenged 50 meter dashes to the box. Or when Marco Motta is busy making a ligament-less Cicinho look like Paolo Maldini in his prime.

There are worries here, but fix a few things elsewhere and they will begin to lessen.

Midfield: I haven't seen anything part that wide since Noah spent one night in Paris. That was abysmal. Diabolical. Criminal. Al Gore. All sorts of al's.

The great worry on this team is not the defense. No defense, no defenders can stand up when being run at constantly with such ease and reckless abandon. Cans of tuna are more difficult to open up than the Roman midfield has been this preseason. Throw Juan in there and it won't matter a bit, they'll still get slayed.

And a great deal of blame goes to Daniele, not David. The Chilean dwarf can't help that he's the defensive equivalent of the coat-hanger abortion - stick something, anything, in the way and hope it works. Therefore Daniele needs a kid leash, because he's the only one in the midfield, should they go ahead with the 4-4-2, who can defend a Special Olympics reserve side. He's gotta patrol the acres of space between the defense and midfield while David is poking around aimlessly upfield. Daniele also must kick Philou in the man genitalia when the Phrenchman fancies himself a centerforward - only Juan can do that.

The diving has seemed to subside a bit, but hamming up that penalty was entirely unnecessary.

Alessio: I've never been as enamored as the majority regarding Sir Cerci, and I'm still not. I think it's the curls.

Whatever the case, at least he's looked a serviceable player for the now, and perhaps more for the future.

Totti: I wish he'd stop scoring because it's going to get to the point in mid-October where three in four games is going to be considered "out of form". I don't need that sort of letdown.

Team total: 51. Divvy them up at your choosing.

Now what are the odds Jan Novak is Roma's next mercato purchase? I know it's been joked about, but don't rule it out. Seriously.

(Has anyone checked the luggage on the way back from Rome? Are we in for Mexesgate v2.0?)

That's all. A friendly-quality performance in what was as close to a friendly as you're gonna get.

Next game: Genoa. Serie A.