Share All sharing options for: Genoa: The Love Returns. 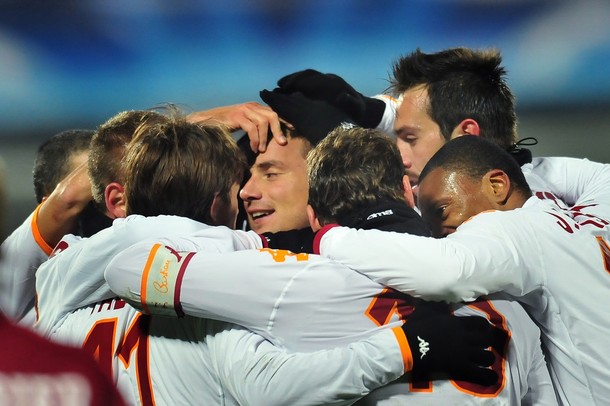 What a strange, strange season opening this shall be. Strange, but not abnormal. This is Roma, you see, and we should expect nothing less. Nothing less than drama, worry, indecision, nausea, vomiting and night sweats. Up is right and left is down in the land of Roma, and this shall be no different.

The squad is, to say the least, incomplete. Whether it be via injuries or the mercato, work is left to be done, spots left to be filled and players left to be sold.

For fuck's sake, when Adrian Pit is back making the callup squad, we don't need to elaborate.

But not only is the squad incomplete, the great worry, central defense, will be plugged by two of the following:

i. A 23yo talent whose last Serie A appearance came in 2006.
ii. Marco Cassetti, a rightback whose central abilities could be aptly compared to a red carpet.
iii. John Arne Riise, who could either put in another heroic Arsenal performance or ge(n)t shredded like cheap mozzarella.
iv. A guy whose experience in a Roma shirt comes to precisely one afternoon walkthrough, who spent much of the day before darting through airports to sign a contract, and whose odds of making it through the fixture without a red card stand aside those of Spalletti showing up with Okakachukamuthafucka's haircut (Stefano's official Roman nickname, stolen from marco).

The days of joking that Daniele Prade is vice-Tonetto are beginning to look mighty appealing. And while we're at it, just how did Roma come within 20 minutes of the scudetto with Max Tonetto and only Max Tonetto as a startable leftback? Miracles never cease, etc.

And thus, for a new Roma to be birthed, the old Roma must return. They must play for each other, stand compact defensively, drift to space, run with intent, pass quickly with vision and move fluidly. Become a team once again. It has to be Roma's ode to totaalvoetbal once again.

As complicated as it may sound, it's really that simple: Roma must go back to its roots. It's all about the football - it always was and always will be.

(This may not mean much, but having two players - one of whom may be headed out on loan after the game - with single-digit uniform numbers yields absolutely no confidence whatsoever.)

Just out of curiosity....

Take Brighi, Tonetto and Cerci from the bench and that's not a horrible team going to Genoa.

But joking aside, that injury list is, once again, a fucking disgrace. When's it going to change? Can Prade swap some of the Brazilians for another squad's medical staff and a bag of weed for The Tyrant of Trigoria? Chill out, Luciano.

As I was making out this lineup, the sticking point came in only one place: central defense. First inclination was Cassetti, who is nudging eerily close to Pizarro territory with Spalletti, I gather. But the chances that Burdisso starts are very, very high. And given that he'll be aspiring to deer in headlights with many of his new teammates, some sort of familiarity in central defense would be nice. And did you know there's a defender on this Roma squad who has some familiarity with Burdisso?

I'd forgotten as I gather most have, that Marco Andreolli once played for Inter. He didn't play much, but he did train with them - a couple years ago, it should be said - and he did work with Burdisso. And he's the only other centerback available.

Of course this is Spalletti and it's much more likely that Cassetti, Riise, DDR or Aldair's older brother start at centerback than Andreolli, but I won't back down. I say it should be Andreolli, and it will be. Unless it isn't.

It's an impressive squad, no doubt, compiled by an impressive network. However, I always worry a great deal about teams which have undergone too much turnover, particularly at the beginning of the season. Genoa fit under that category. To be honest, they look like they've followed Fiorentina's blueprint to the point of excess. (Of course Fiorentina's blueprint always struck me as slightly excessive anyway.)

How many of the newbies play remains to be seen - their Europa League match (3-1 win at home against Odense) was mostly familiar names - but this is a different team from 08/09. Their great goal scorer is gone and Thiago Motta, who knocked opponents off kilter with elbows while everyone else tried to play football, followed him north. Big losses, bigger than anything they brought in, and that's news in itself.

They're also missing some meaningful bodies in Jankovic, Palladino and Floccari. So while saying "going to Genoa with a shell of a team" isn't exactly the good word, what's awaiting in Genoa is a mystery. They'll be good, but how good? No one knows - and even a very good Genoa, one featuring their big guns, was shredded to pieces in Rome last year.

In other words: two teams, no clues.

Incredibly, he is the only Roma centerback with any worthwhile experience in Serie A - and he has no experience with Roma whatsoever. Communication and quick assimilation will be key, but even more key will be Nicolas playing like a fucking badass for 90 minutes. The end.

I see Genoa's attack and raise you Roma's attack:

Rodrigo Palacio is also nice if you like guys who can run really fast with ridiculous rat tails.

Do you know who's really "nice", though? Francesco Totti. And Yeremy Menez.

Right now, I'll take those two over just about anyone in Serie A. Actually, given his form, I'd take Francesco and a plate of beef carpaccio as my strike pair right now and be chuffed to bits.

Brighi & Daniele need to show up and David needs to leave the upid passes in Luciano's hotel room. 'Bout it.

And by that I mean it needs to stay in Rome before, preferably, taking a vacation somewhere over yonder next weekend. It can even hang out for Kosice v2.0 before packing its bags.

When all else fails, Roma must remember one thing....there's a reason he is The Grand Imperial Poobah. Calcio's alchemist can find a way.

(There will be a proper season preview when the time presents itself. Today was proof enough that now is not that time.)