Genoa: A Static State of Flux.

Share All sharing options for: Genoa: A Static State of Flux. 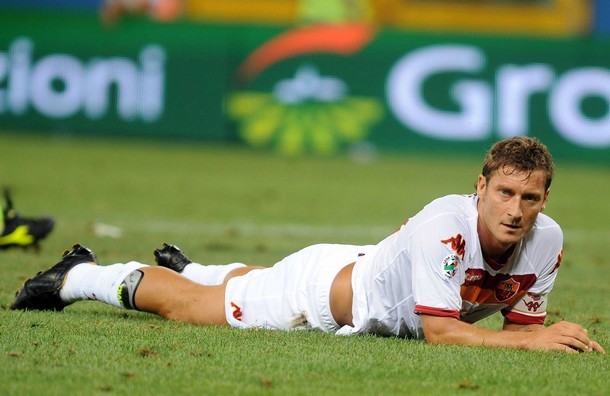 Two things need to be said off the bat:

i. Genoa are quickly turning into the (non-Lazie) scumbags of Serie A. If they somehow nabbed Mutu, it'd be an All-World team. Kicking, pushing, pulling, elbowing, tripping, fouling, whining, diving, rat tails - it's awful.

Though I do get that's how inferior teams win games.

ii. Hernan Crespo should be banned for life from sport - football or otherwise. I don't even care about the persistence of his diving; but rather, how can one play this game for so many years and still be so damn bad at it? At least Nedved tries somewhat to conceal his transgressions. Such incompetence, even at cheating, cannot be tolerated.

(I still cannot fathom how anyone wanted him in the hallowed giallorosso - borderline treason.)

The talk that dominated the postgame was, of course, Morganti. I'm not going to say anything except that it's so very appropriately Roma that the great subject of controversy on the night, Giuseppe Biava and his non-negotiable red which magically turned into a yellow (tripped Menez from behind as the last man for those who missed), scored the third, and ultimately winning, goal. It's the type of crushing inevitability one comes to expect with the giallorossi.

As for the play on the pitch, I'm not going to throw the backline under the bus like many - in fact I can't. Motta was okay, Andreolli decent enough for a kid, Burdisso stellar given the circumstances and Cassetti...well, while I can see what Spalletti might have been thinking, I simply don't agree with it. I also can't blame Artur, because Criscito buried that goal, Zapater put it in an unreachable position for anyone and on the third goal, where he gave up the rebound, he appeared screened by every and all highlights and it's a fricken' miracle he got to the initial shot as it was.

But there's plenty of blame to go 'round:

i. Daniele De Rossi. With Goober and Pizarro alongside him, he is the midfield, and he needs to be better, must be better. And in order to be better, he must do less - which should make sense a bit further down the page.

ii. It's impossible to heap blame upon someone who scores a phenomenal goal with his back to goal later on, but Francesco absolutely has to bury that 1v1 with Amelia.

iii. Spalletti needs to get his shiny, lubricated dome out of his ass during halftime and read a motivational speech aloud or something. I have no clue what goes on in the locker room. I don't even have an inclination. The only theory I have is that knowing Spalletti, the lads are so buried in tactical alterations coming out for the second they're so far upside down they're nearly right side up again.

iv. Set pieces. You know who had the runner (Sculli?) on that third goal? Alessio Cerci. You know who shouldn't be expected to provide critical defending on set-pieces late in tied games? Alessio @#$%ing Cerci.

Spal said they'd worked on this "training ground exercise" and his steeds knew it was coming. Whomever was due to pull out to either help (it may have been either Cassetti or DDR) should have done so. End of. Period. Outside of kidnapping the guilty party's children and holding them hostage until they run off a month of perfect set-piece defending, I'm not entirely sure what can be done.

(There's also the inability to motivate somewhere in here.)

* - Also, blasphemous as it may be, DDR is a great, great player....but he's left much to be desired on the mental side of set-pieces a few times before.

I've never bemoaned Roma's depth and, given the fluid positional system with which Spalletti chose to play (4-2-3-1), I found it adequate (and if I may say...I was right). This also falls in line with Spalletti's track record for "shaping a squad" (see: Cassetti at LB) - if they stay healthy, he needn't many. However, with this many injuries, with this much tactical flux, they either need more bodies, another medical staff, another training system or another coach.

They need bodies back or....I don't know. I'd say they need to bring more in, but they'll inevitably get hurt too. So what's the point? It's a vicious cycle.

vi. And finally: this had all the mental red flags of Spalletti's Roma. They played well to a point and were probably due a result, but this was nothing close to world class Roma. We can hope it's down to the incomplete squad, the lack of cohesion, the patchwork defense, the tactical changes, but we've seen this film one too many times before.

* - I swore Zapater got a yellow in the 12th, meaning he should've been sent off at the half. My stream thought this too. So did RomaNews. What the hell happened? Did Morganti flash the yellow and then say, "jk, LOLZ!!!"?

Artur: How many does Toldo save? Dida? Avramov? I say none.

Well, Dida might, but he'd make a boneheaded blunder to concede at least another. I think Artur's come good as a guy who isn't supposed to play week-in, week-out. If you want to hang the management for not picking up a Doni-level replacement to cover his injuries, then do that. But you can't hang Artur as a backup - he's done his job. 6.5

* - And he saved an early goal, which will probably go forgotten.

Motta: I swear he's regressed. And that's a huge worry - one which begins raising all sorts of red flags in other directions. 6.5

Andreolli: That was not a smart free kick he conceded. However, he shouldn't have been put into that position. That was also a terrible injury he suffered. All of which means he's now a true Romanista: left hung out to dry by a teammate, he concedes a dangerous free kick, which inevitably turns into a goal, and is given a one-way ticket to the medic's room along with a yellow card for his troubles.

Welcome, Marco. We've been waiting for you. 6.5

Burdisso: Nicolas is going to play about three games in a row where he looks capable of supplanting Juan or Philou in the starting lineup. Then, in the fourth game, he's going to make Mexes look like a shining beacon of tranquility and good decision making. I'm thankful for this game, and mightily impressed given his complete lack of assimilation to the squad, but hesitant for the next. 7.5

* - That next game, by the by, will be Burdisso & Mexes against the superbly friendly Juventus. I'll lick a leper if they don't sign Nedved for the weekend upon hearing this splendid news.

Cassetti: Sometimes it worked out. Sometimes it didn't. Either way, I don't blame him. You've got THREE leftbacks on the pine. For fuck's sake use one. N/A

DDR: I think that maybe he has a little bit of Totti Syndrome, in that he tries to do too much. It's a phenomenon we've all seen with Francesco during derbies, when he attempts to heave the entire club on his back, and with Daniele it's a similar feeling. He's trying too hard to get things going, to be in too many places, to become too many players and in turn, does too little. I don't think anyone would argue that this aligns nicely with his mentality and his unquestioned position as Futuro Francesco on this team.

One of the best examples of this was right after the second Genoa goal which he so kindly setup. Immediately after kickoff he charged down the pitch, almost singlehandedly trying to recoup the goal. And it's not as though this is an isolated example. I remember a game two years back where Daniele drifted into the box during open play and there was a genuine sense of surprise in the comments. Why? Because no one could remember the last time he'd been seen there in that situation. Now it's a bit more commonplace.

So by doing this a bit more often, his movement becomes a little more north and south rather than the lateral touch-to-touch vacuum which destroyed midfields the country over and helped make this team so successful. And obviously tactics have changed to a point, but his role with certain personnel is largely the same.

Or maybe I'm wrong. Maybe he's just not in-form yet. But it's something I've noticed since that awful run to begin last season, back when he went from possibly the best midfielder in the world to "just another great player", and I think there are some legs in the theory. That sometimes, he just cares too much. 6.5

* - A healthy Perrotta makes Daniele's life much, much easier it should be said.

Pizarro: Not quite vintage, but there were some real positives. When in sustained possession, he made a helluva difference - and even supplied the ball for Totti's 1v1. 6.5

Guberti: The boy has a great deal of adjusting ahead of him. His greatest fault right now is that too often he either tries to beat too many men or just pulls up and fires into awaiting bodies, coming nowhere near the net. Loads of ability, but this game is about more than talent - though no one claimed it would be a smooth start. 6

Totti: Was very, very human, though made up for it with a brilliant goal. 7

Menez: This is getting reduntantly redundant: Incredibly gifted, is often productive (his pace should've won a red), but has to stay on his goddamn feet. The refs are never going to call anything for him if he doesn't. 7

Spalletti: I want to believe it's about the first of the year, that it's lack of bodies, that the season is far too young, but once again...we've seen this film before.