A Roman For Roma

Share All sharing options for: A Roman For Roma 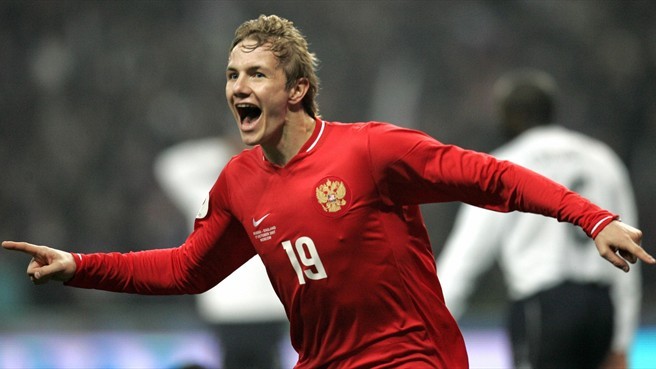 At this point in the mercato, perhaps even at any point in the mercato, in that picture above you're looking at one of the most likely strikers headed to Rome. For ages it seemed he was reluctant to leave Tottenham - who the hell knows why - but now, with his playing time curtailed, new thoughts arise.

"No footballer likes being on the bench game after game," Pavlyuchenko told Sport Express in Russia. "I could lose my place in the Russia squad ahead of the 2010 World Cup. I'm ready now to listen to offers from other clubs."

One club has been linked to the aptly named Roman constantly throughout the summer and that has been, you guessed it...Metalurh Donetsk.

The likelihood he's available to Roma, with or without the sale of Julio Baptista (Yeremy's goin' nowhere but to his knees right now), is, well, likely. We'll leave it at that. A loan move makes sense for all sides right now, given that Tottenham would need a good season from Pavlyuchenko, regardless of the shirt, to even begin to recoup his transfer fee.

And that's the thing: I've always liked Pavlyuchenko - I have, even when Guus called him fat - and I love his game within the team mechanism, but the sum paid for him by Tottenham was a few million quid too high and the expectations for his type of player well too high. Pavlyuchenko isn't the star - he's the perfect Robin to a premier Batman. The swiss to the ham. The Garfunkel to Simon. The K-Ci to Jojo.

Robin is a very good all-around striker. One who does lots of things well, some things very well, but nothing spectacularly. He can have some spectacular moments, and his passing as a forward is one of his best assets, but he feeds off the team as much as himself. His aerial play is good, and it helps being fairly tall, he'll hold up plenty well, he'll command the odd double team and he's a very smart footballer. He'll find the right position, but someone needs to get him the ball. He'll get you the ball, so long as you find the right position. He's kind of like Mancini, but the complete opposite.

He's got this rapport with Arshavin, which is what makes the two so deadly for Russia (that and Arshavin being the ta tas). Will he have it with Totti? There's a decent enough chance. But I'm not sure he's what this teams needs. I still think this team, if Spalletti continues in this direction, needs a true poacher; a man whose lone earthly desire is to bury the ball into the back of the net with such vigorous hate Satan bows in reverence of such evil. Roman is not that.

It's funny, because I love Roman Pavlyuchenko as a player. He's my type of player, if ever there was such a thing (I do love me some footballing intelligence), but I'm really not sure he's Roma's type of player - name be damned.

On the other hand, I'll readily admit 99% of my knowledge, which isn't exactly insufficient, comes from his time with Spartak and Russia, so his days with Tottenham aren't my forte. If it's the pace of the Prem which gave him fits, Serie A might be just what the doctor ordered.

Whatever the case, don't be surprised if his agent is spotted in Rome, oh, today and things advance quickly. Call it a hunch.

Can he possibly be worse than Simone Loria? No. Welcome aboard.

Onto Kosice it is then.