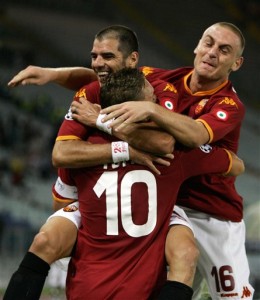 One moment, that's all it takes. Grazie, Marco.

Melo goal. 3-1. Game. You take those risks when pushing forward like this.

91' Free kick does nothing but Roma retain possession...Mexes goes for the audacious bike but no dice. 5 minutes added.

Pizarro wins a free kick from 25 or so. This is a chance.

Alessio Cerci is looking quite good here on late, so that's something.

Cerci with a brilliant move to center it but the trailer couldn't hit the open goal. Huge missed chance right there..

Superdouche Poulsen on for Diego.

83' Another save by Luio Sergio. Cerci break.

81' David hands the ball right back to Buffon with a ball well too strong.

Yellow to Grygera for yanking down Mirko on a ball over the top. Cerci on for Perrotta. Balls to the wall, lads. This is do or die.

77' Tonetto cross to Mirko but just beyond. This is shades of a former Roma.

74' Oh Mirko. So nearly a brilliant header for the tie. God it's nice to have him back. Legrotagglie on for De Ceglie.

71' Menez turning the Juve defense into a bout of vertigo before shooting wide.

Riise off for Mirko. Spal ain't fuckin' around.

68' Perrotta right back down the other end with his hustle work for a corner. Another fake goal for Roma - 3-2 Roma including fake goals.

Diego celebrates by grabbing a beer and car keys.

65' And you've got to believe Perrotta's time is coming up shortly. Of course what that means for the midfield is beyond me.

Class work by Mexes on Iaquinta.

62' The Geisha coming on for Marchisio.

59' Cassetti injured, trying to run it off.

57' Iaquinta boots a 1v1 over the net! Daniele missed a rare tackle there.

Scratch that, beast of a defender Burdisso came back and tipped it over for a corner.

54' Julio Sergio with a save on a point blank Amauri shot. Corner, then goalkick.

53' Daniele De Rossi is playing out of his mind right now. Welcome back, Daniele.

52' Marchisio with foot issues, taking off the boot. Possible sub here, considering he wasn't touched. One of those dangerous "no one in the area" injuries. Superdouche Poulsen warming up to possibly partner with Superdouche Jr. Diego.

51' Tiago with the touch of a bronzed Julio Baptista; goalkick Roma.

49' Another nice player by Julio Sergio. Can't anoint him yet, but how has it taken three #$%&ing years for him to get a chance?

48' Riise bundled from about 30 on the left flank, another chance to whip one in for David...headed out.

46' A quick start with Menez making a run and Roma on the attack, but just missing that final movement.

Taddei off...Tonetto on. That makes sense from a balance standpoint.

A slow start but a big improvement after the DDR equalizer.

Spalletti has some serious questions to ponder in the locker room...namely who's coming in for red-card-waiting-to-happen Rodrigo Taddei?

Oh dear Jesus....Totti stopped 1v1 by Buffon. An epic chance at the half. Damn, that Gigi has quick reflexes.

41' Another Pizarro FK from the same spot as his earlier abortion, this one wins a corner...Taddei foul again. Seriously, he's begging for a red.

40' Cassetti tries to bang one off of De Ceglie for a corner, flutters into Buffon. Sounds about right for him today.

I'm getting a little worried by the yellows here. This guy does realize it's Roma - Juve, right? This ain't a friendly friendly.

Yellow for Diego and Simone. It should be noted that Diego was widely seen as one of the biggest scumbags in the Bundesliga. Diego was barking, Perrotta did nothing. Nicely even there.

The fuck ups have now been washed.

Quick free kick and he hammers it from 30 by Buffon!

Speaking of, Taddei yellow. He's just begging for a red here. If he makes it to half time, he's gotta come off.

Amauri and Taddei must be competing for an Azzurri spot by seeing who can get more stoppages in play this game.

30' Taddei crosses to precisely no one. So that's nice.

Tiago goes down like his knee snapped in half, walks back on without a limp moments later. Well done, twat.

Marco Cassetti needs to be tactically removed right now. 1-0 Juventus on one of the worst gifts you'll ever see.

I love Cassetti, but that was awful. Lost it at the half and Diego ran towards goal with Mexes chasing but couldn't catch up.

24' Menez wins the corner, Totti pushed in the back in the area, no call.

Another set piece and the header was going towards the back of the net when Sergio tipped it up and over.

Julio fucking Sergio with the goal saving save. You goddamn legend.

21' Critical interception by Mexes to give Juve the corner but someone (Burdisso?) left the back out to dry for a moment.

These set pieces are absolutely terrifying.

19' David with the always excellent pass back to the keeper with 3 Zebras in the box.

16' I do like this strong midfield with the fullbacks, particularly Cassetti, getting forward, but do worry about Perrotta as the game drags on.

But worth mentioning: Mirko Vucinic is on the bench. That, ladies and gents, is a fuckin' Ace up your sleeve.

Yellow for Tiago for a foul on Menez.

13' Taddei seems to have had about thirty quasi-fouls so far. Might want to watch that accumulation there, Rodrigo.

Totti tripped from behind by Marchisio and Cassetti fires one from distance. I bet Juve will give him that all day.

Philou is beginning to worry me here. Playing far, far too high up the pitch.

6' Corner Roma...Pizarro curls it towards Parma as he's looking for Panucci back post.

4' AWESOME catch by Julio Sergio. And by AWESOME, I mean overwhelmingly basic.

3' Diego already on the quick trigger from distance, deflected for a corner. Also nice to see Pizarro on Diego near the box. Diego, still a midget himself, can simply fire it over the top of David.

1' Taddei called for a foul in the Juve box, Roma buries the ball anyway. 1-0 on fake goals to Roma.

Just realizing Spalletti's other mancrush, Iaquinta, is in the lineup. Excellent.

I gather this confirms Roma will have a new backup by Monday? 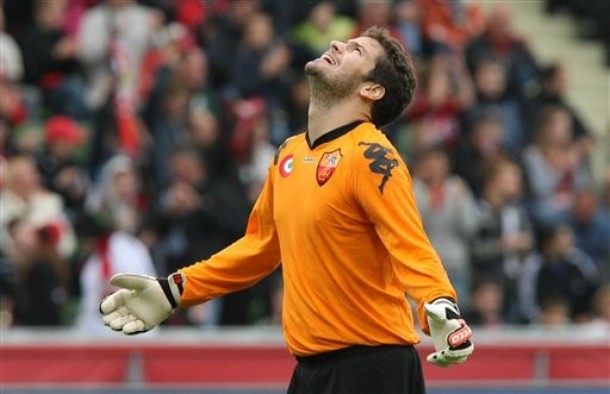 Well hello there. I'm not entirely sure what this is, but it's words before the game. It might even be words during the game. Or maybe I'll fall into a nap and wake up at noon on Monday. The possibilities are endless.

It really is unfortunate that wolves and zebras do not share a natural habitat (Serie A v Serie B, the pitch v the referees' locker rooms, etc.) as the photos would be fantabulous, but we're stuck with cheetahs today, a surefire sign that M. Menez and Goober will be shredding those black and white striped bastards into a delicious meal of some sort.

I had a dream last night - and I should say that I never, ever, ever dream, regardless of subject - that Marco Andreolli will partner Philou in central defense this evening. That I dreamed a player not on the squad list for the game is starting baffles the armchair psychiatrist inside. Does this mean Burdisso and/or Juan will leave something to be desired? Does this mean Philouppe will be red carded? Does this mean all three will get injured? Did Marco Andreolli come into my bedroom last night and whisper sweet nothings into my subconscious? I don't know.