The Liveblog of Woe

Share All sharing options for: The Liveblog of Woe 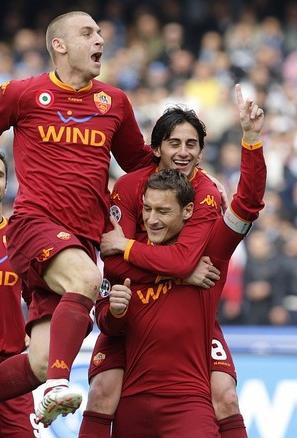 Gent is not a very good team but....this is nice.

And now we desperately need somebody, anybody to score another...

Riise goes 1v1 from an angle but the keeper actually makes a save. First today?

I think we're at the 80th minute. The ref might as well blow the whistle now, however.

YEREMMMMMMMMY GOOOOOOOOAL. This is an execution. Roasted his defender, coolly slotted it into the far corner. Brilliant.

That was inevitable. Goal Gent. Normally I'd say "no way they're getting clean sheets anymore" but everyone has check out. (Though not good for Andreolli with the gaffe.)

Seriously, that was ridiculous. Running away from the goal, ten yards out and he backheels it in on the fly. Gesu. (Dare I say...Zlatan-esque.)

GOAL DANIELE Easy as pie off the corner with a freakin' brilliant backheel.

Mexes goes down. Limping. This is freakin' excellent.

Taddei coming off for Cerci.

68' Lots of moving the ball around midfield and waiting to release someone for the inevitable #5.

Okaka could desperately use a goal for confidence purposes here. He won't get it, of course.

Cassetti on for Motta. ETA to Marco's hair condom?

Penalty Roma. This game is a joke. Handball.

63' Menez clipped, like actually clipped, for a free kick from 20. (He's actually been staying on his feet quite often throughout this game, who knew?)

a. Get Totti off the pitch.
b. Get some kids on.

Feckin' brilliant work by, who else, to flick the ball fwhile falling down onto the onrushing DDR. Done and dusted. (And Daniele chipped the keeper for good measure.)

53' You get the feeling if there was an ounce of true care in this squad right now, it could be 7-0. This has all the feel of "going through the paces".

51' Nice through ball try by His Tottiness is perfectly on, but given Brighi's lack of Usain Bolt speed, he fucked it up.

And Yeremy just stayed on his feet! (Gent are penalty hunting.)

They're throwing more shit on the pitch. This game might be in trouble. And now everyone's walking off the pitch. Halftime or the game has been called/halted? The referee, who's been constantly talking to the Gent captain, stopped play just before a Roma corner, called over the Gent captain, directed him to the sidelines and everyone just walked off the pitch. No clue what just happened, as my stream died at the same exact time.

Slight break in the acttion here s they pick the remove crap from the pitch. Excellent shot of papers flying by Taddei as he's removing previously thrown trash.

Yellow for #3. That would be #2. 1 yellow + 1 yellow = red. This tie became a friendly real quick. And Gent fans are firing stuff onto the field. (Easy yellow for an elbow on Taddei there.)

43' Menez break results in an Andreolli intervention down the other end.

41' Gent do nothing with their free kick, Marco Motta pulls a Philou and races down as the first man in attack.

39' Roma narrowly miss conceding another peno; Preud'Homme pleads for the release of political prisoners the world over.

37' Menez on the floor....and he was actually kicked. More small victories.

Did Spalletti just smile? During a football game? Involving Associazione Sportiva Roma? When was the last time that happened - '07?

Another goal would be splendid so that Okaka, Cerci and Fatty could get a run.

Free kick that simply knuckled the goalkeeper into confusion.

33' My stream went down. I suspect it was running on Menez's ability to care.

Nice to know we're bringing back the "Give-A-Shit" factor for someone this year*.

29' No one, and I mean no one, in world football falls more comically than David Pizarro.

Riise hammer saved. I suspect that goes in without protection impeding his movements.

28' There's a decided lack of crispness in the final third. I didn't expect much more, but I did.

Someone from Gent is now also wearing a hat. This game is a walking safe sex ad.

25' Has Andreolli purchased new boots since coming over from Inter? Why are they bright blue? Would somebody get this kid a decent contract? Where the fuck is Brighi's agent when you need him?

24' This game is boring me. It's a real game, obviously, but that treq line of Menez-Brighi-Taddei just isn't cutting it right now. I miss Goober and Vuci.

21' I don't think Gent has a chapter of the Francesco Totti Fan Club. Booed with every touch.

17' Riise-cum-turban.......and someone from Gent can no longer have children, but no goal.

16' Francesco wins a free kick from range, Maric gets his 8th yellow card of the two-legged affair.

15' As Brighi completes a 3 yard pass, his agent picks up the phone to demand a new deal from Prade.

14' 1. I can't see the clock.
2. There are now two whitecaps on the backline. Who's taking bets on Mexes and a head injury next?

11' Andreolli now bleeding heavily from the head. One half of the back line now looks fresh out of a Tarantino film. Dear god this team is cursed.

9' Mbaye missed the ball and headed Riise in the back of his head. John's bleeding. This is a good start. Lunchlady Riise! (I just had a Loria flashback. Ugh.)

7' Gent off the post via a wundershot which would've simply been a fantastique Aquilanie-esque goal. Sigh.

6' Motta stumbles, falls, takes down attacker in box, walks away as if nothing happened. Excellent.

2' Francesco drives it at the keeper who makes Preud'Homme shake his head, but saves anyway.

And this stream is tiny, fyi.

1' Noticed this the other day, but the fact that Menez has been switched to #93 doesn't bode well for his long term Roma future.

This liveblog is going to make Kurt-cum-shotgun look downright sunny.

Goober on the pine is a slight surprise; Scuba Steve is just as much.

This should go well.