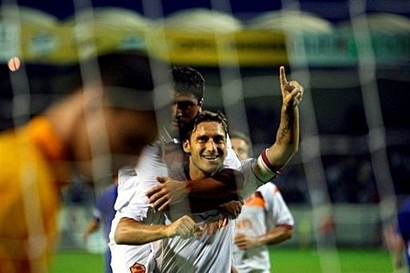 Can we laugh about it yet?

Did that cure all that ails? No. Was it a start? Absolutely.

Where am I going with this? I don't know. It was great to see that scoreboard operator pick up carpal tunnel within a 90 minute fixture. It was also nice to change pants twice in jubilee upon the sight of a Totti, De Rossi, Totti, Totti, De Rossi score line (check that, thrice). But all piss-stained jubilee aside, I'd like to see them play a real team at full strength before throwing on an 07/08 Kappa and declaring that 08/09 never happened.

So it was a fantastic start, but the road is long and the margin for error short.

The gods are finally smiling upon Roma - perhaps it truly is darkest before the dawn.