And So The Morning Beckons....

Share All sharing options for: And So The Morning Beckons.... 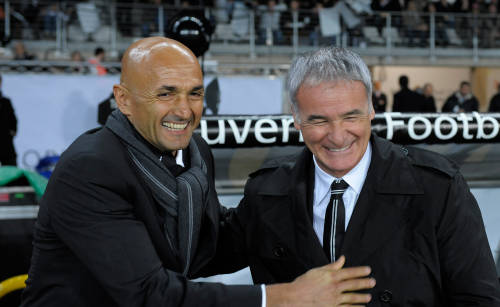 Rumors began flying today that The Grand Imperial Poobah's resignation is on its way. Rumors this evening tell us that Spalletti's resignation will be announced in the morning, and that Claudio Ranieri will be put in his place. Until then, we wait.

I don't want to bite, I'm trying to force myself away, but we've all watched the games: the man's heart is no longer in Rome. I won't say it's likely, and something says Wednesday morning comes with Spalletti at Trigoria, but there's an incredibly good chance things are not all butterflies and unicorns at the Poobah household this evening.

And the longer this goes on, the worse it gets because we've got to call a spade a spade: he's gone after the year whether he stays or not. Perhaps a fresh(er) start is needed for all parties, and maybe Spalletti could use a year to clear his head - he sure as hell deserves it.

The problems mounted against Juventus. The lineup was far too scared, a pattern which has evolved with Luciano, and the squad had little collective direction, no fight. That's the coach's job. In fact this isn't a one time thing. Only too often this team has no fight and seems to have abandons Spalletti's tactics, his directives and his desires. In short, he looks to have lost the team. Hell, he looked to have lost the team last year - Lord knows there were enough rumors indicating such.

Right now this team doesn't need tactical ingenuity or the most cleverest play of all in Serie A, it just needs some fucking passion. Some fighting cohesion. When they play well they can take on anybody, but they need some consistency. It's going to get played and overplayed like that latest pop song sensation, but Spalletti's time may have simply "run its course".

I've always believed Ranieri to be a good coach, but not quite top tier. As a short term stopgap - end of the year or so - he's fine; long term I'd prefer someone in the Walter Mazzarri mold. And yet on the other hand...how best to instill some life in a stuttering team which has lost its direction?

You appoint a goddamn Roman.

Well, actually I do: Lobont can push Doni for a starting spot when's he on. And suddenly, none of the keepers are comfortable with their position. Competition is good.

That said, Lobont is still coming back from surgery. Julio Sergio is the starter until the doctor pats one of Lobby or Doni on the ass on the way out the door, it would seem.

And he's not Brazilian!

* - Also worth noting: Roma have a Becali Bros. client on the books again. Oh joy. (Flashback: The Becali bros. are the uber scumbags who represent Chivu and made a shambles of his transfer.)

I have to say, I enjoyed watching this one unfold in the comments. Roma loans Primavera guys every year with a 100k, 200k, 300k, etc buyout and we rarely care. (David Sugar, Daniel Unal, Adrian Stoian and Alexandre Pena to name a few recently.) This was the overreactive Roman fanbase in a nutshell...passionate crazies that you are.

Tall guy with some talent - I actually recall when he was poached from Atalanta and it wasn't exactly taken lightly - who needs to grow into his body, so Roma will take a flier, as they and every other team do, for the Primavera and maybe, if he performs up to snuff, they'll buy him out. Happens every window.

If he starts making cameos on the squad lists, that's a good thing.

Always the most likely candidate for the "top secret mission" Bronzettiballs had mentioned, and despite Roma & Real coming to terms, Ruud said no thanks. Bastard.

Guess what? Roma kept some warm bodies for depth - and some may surprise. In fact not counting Piz or Zamblera, there are 28 players on this roster. Who'd've thunk it?

Mauro Esposito: I sure hope Mauro's not on a pay-as-you-play deal. Cerci's going to get many, many looks early on - he might even vault beyond Goober - and Espo, well, ain't.

Still - beating heart and all that.

Andreolli/Okaka: As it stands, Cerci, Andreolli and Okaka are the three youngsters closest to pushing for some real playing time and any of the three could have a breakout season this year. While the mercato didn't provide any big names, it's wonderful to see Roma's superbly talented youngsters in Rome ready to contribute to the big club. All it takes is one.

Artur: He went from unquestioned starter in Doni's absence to 4th on the depth chart starting in October. He must be positively chuffed to bits.

Antunes: People, some who know their shit, really rate this kid. Like really, really rate him. 22 and with three Portugal caps to his name, he's got a real chance to make something of himself. But will Spalletti give him the requisite playing time?

Ricardo Fatty: Watching him is like watching a 33 year old Patrick Vieira: a tall-ass central mid with no idea how to use his body (anymore in Vieira's case) alternates infuriatingly between "shit, he's got talent" and "shit, will someone put him down?".

I love this goddamn team.

(I'm moving on Friday. You can see where this is going. A difficult week ahead.)