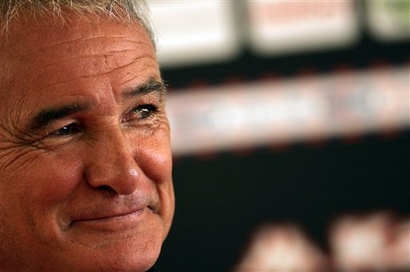 Often we huddle around the desk, engulfing ourselves in the blueprints, offering up tactical nuances here, personnel changes there and, according to number one, the golden tonic which will cure our favorite team's ails. A 4-3-3 here, a trequartista there, the channel down yonder - so detailed, so planned, so nurtured. It's the tactical way. And here we sit, once again, to offer up the golden tonic which will cure all Roma's ails:

A kick in the pants.

Something had to be shaken up. Was Ranieri the right move? Maybe, maybe not. [Insert overused cliche here.] Nothing has changed since last week: in the short term, Ranieri is a good choice. Beyond that, I haven't the slightest. I'm still anxious for this weekend.

After Juve, the discussion was, again, the goals conceded: six in two games. I so desperately want to call it five - the sixth was the result of pouring forward, not defensive frailties - but it's six. That will change under Ranieri. Defensive stability will be a priority, if not the priority. The anti-Spalletti, if you will. The first kick in the pants. The rest will come, preferably with steel-toed boats after a number of calisthenics, but only in time.

Sunday is an impossibly important game. Not the result, not the goals conceded, not the formation or any of that mumbo jumbo footballing pundits tend to harp on about, but rather how they play. The mentality they display; the sense of urgency in week three; the type of team which will be foreshadowed. Will they fight? Or will they come out flat? Will they concede a goal in the beginning of the second half? Will they have a "blackout"? Again that magic word: wait.

It aids in that Ranieri has been watching this team throughout Spalletti's tenure, even as the "enemy" the last two years: his job was to pick Roma apart. He knows their strengths, their weaknesses and all that lies in between. His new jobs are to accentuate, fix and muddle through all that is Roma. These are small things in the grand scheme if one can't implement his desire, but big small things. Medium sized, even.

And part of this comes down to one very important factor: they have appointed a fan to lead Roma. No different than you, no different than me, no different than the ultras. (Well, except he has a clue as to just what the hell he's talking about.) There is a certain degree of desire one would not get with Spalletti or Mazzarri or anyone else - and that is by no means a dig at their professionalism. Just that facts are facts: there is an added motivation beyond professional wants from the start. This team needs that added motivation. They need to fight on a weekly basis. For the fans, for the city, for the coach, but mostly for themselves. To find a renewed sense of pride in being, even if not born, Roman.

Maybe Ranieri isn't the greatest coach alive, something I'll gladly concede, but he needn't be. He needn't be perfect, needn't be ideal, needn't be brilliantly visionary. All Ranieri needs to be is the right man at the right time. Only time will tell, but the path certainly looks, dare I say, hopeful.

Tactics are, again, very much wait and see, but if you haven't read Blogistuta's interview with Ranieri from 2007 on his training beliefs, then shame. It's fairly eye-opening stuff in its candor.

RomaNews tends to believe Claudio will go to Tuscany with a 4-4-2. One which reads something like this:

(I have great doubts this will be the lineup, but I also have bad news: the only likely change will be Motta for Burdisso.)