Show Me Your Roma

Share All sharing options for: Show Me Your Roma 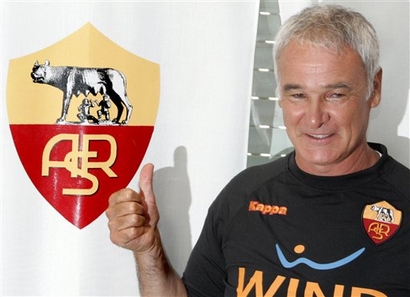 When referring to Roma the last few years, it was never just Roma, was it? No, it was always Spalletti's Roma or Roma's beautiful play - and 4-2-3-1 was never far behind.

And now, everything has changed. We can't pretend like the champagne football went out with Spalletti - it ran nude out the door at some point last year - but Ranieri football is not beautiful. Or not aesthetic, we should say, as the beauty is in the result. And that's what's so strange about all of this. Would any other team be this unfamiliar with a new coach? It's as though we're long lost friends, reacquainting after years apart with little clue what to expect. This team long rooted in its footballing detail, tactical nuances and near overwhelming complexity is now....what? This is a testament to Spalletti and the wonderful job he did bringing a quantum physics text book to a high school science class, but now we're left drifting in some black, mysterious abyss. And maybe as a result of all those nuances we're paying a bit too much attention to the tactics and not enough to the general feel of a new coach, but what can you say? Spalletti left his fingerprints on the fanbase just as he did the team.

So this is a new dawn, a fresh start and a learning experience for all involved. A reacquainting with that old friend with no idea what to expect other than 'not pretty'.

Of course the fixture gods weren't so quick to dismiss the past: the boys have been sent back to Tuscany for Claudio's debut. The perfect fixture to test the abilities of a 'result-oriented' coach? Probably. No need to air the dirty details, but everyone knows it: Roma under Spalletti was the footballing Hindenburg in Tuscany. So much so we dubbed it The Curse of Toscana, and a fair few insinuated Tuscany's homegrown son TGIP was a double-agent in domed disguise.

I had to look this up to check, and even I'm shocked at the result: it'll be three years on Thursday since Roma has last won in Tuscany - a 3-1 victory over Siena on September 17th, 2006. THREE @#$%ING YEARS.

Welcome, Claudio. Now lift the curse, or else....

“I see the side training well and they want to turn over a new leaf, hopefully starting from Siena. I don’t believe in the 4-4-2, as I maintain good players come first and tactics later. I want to talk it over with everyone before deciding.”

Of course this will most assuredly be a journey, not an immediate destination. The formation will likely evolve, naturally we hope, over time, but tomorrow could see a 4-4-2.

Or not. As with all else, Roma is at a standstill until the final whistle is blown tomorrow. Until then...Roma is a mystery.