Rejoice! The Curse Is Lifted.

Share All sharing options for: Rejoice! The Curse Is Lifted. 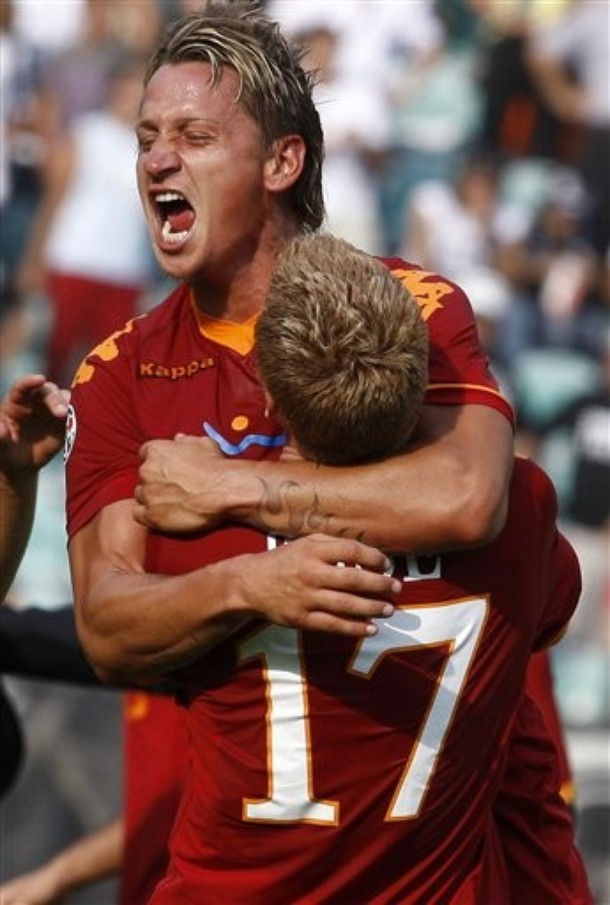 At this point, it's genuinely hard not to get excited about a victory like this. Yes, it was Siena. Yes, both goals scored came from defenders. Yes, it's only the first game. But there was so much good to build upon, so many positive signs we can only hope to see progress through the weeks.

First things firstly: half this fandom - which DDR called "fickle" (he was being kind) - was ready to lynch Ranieri for his starting lineup before the opening whistle. By the half, people were pissing on his empty catacomb. And this should be a lesson in biting one's tongue and that thing called 'patience':

In short: Vucinic couldn't play the entire game due to playing 90 minutes midweek (and he's still not that far off surgery) while Baptista was limited to 50 minutes for similar fitness/fatigue reasons (just back from South America).

No Menez? No Goober? No surprise. Ranieri likes his experience, but with a new system most coaches are likely to employ veterans to ease in the transition - and this before getting into the tactics on the day.

Now the good stuff: a Tuscan win...for the first time in three years. My, my, my how sweet. And that, beyond any means, is a wildly successful start to the Claudio Ranieri era. Period.

The better stuff? A comeback. A comeback with no blackouts, no second half swandives, no quitting, no mental dropoff whatsoever. Yeah, still early, but those are going to be paramount within the first few weeks of the Ranieri era in order to breed an aura of confidence within the squad. (It should be noted they didn't concede from 45-60 against Juve, either.)

And while there are a number of criticisms to be spewed on the methods of their victory - very little going in the way of offense - they did play well one both sides of the half (it's important not to confuse 'ugly' with 'poor'), which is certainly something. We can pick apart the halftime scoreline, but most counters don't shred Philippe Mexes into pieces of little girl. Maccarone happened to, and it's not the first time he's done so against Roma. Color it as Massimo having Roma's number and move on.

All good signs going into next week, and even better that there's a midweek game for Ranieri to...please forgive me...tinker with things a bit more as the team finds its identity going forward. I want to watch the game again before going into too much, so for now some notes and highlights: