Share All sharing options for: Siena, Basel & The Shipyard. 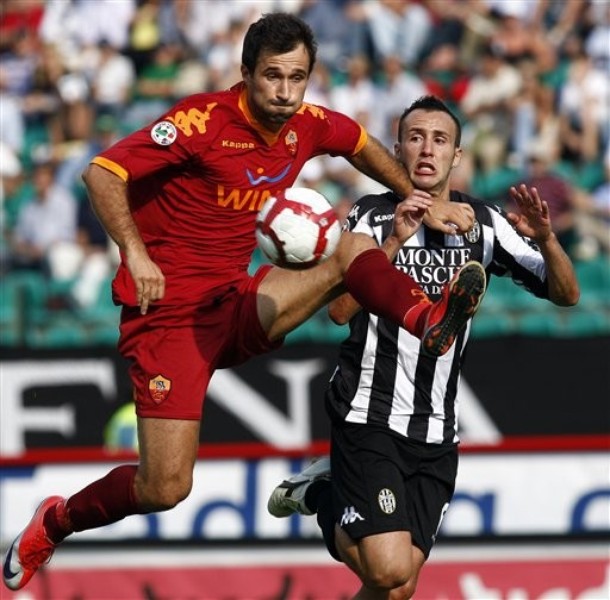 And now it'll be interesting to see which nuances and player performances change on the weekend against a slightly better Tuscan side.

Two things which are so beyond idiotic a passing mention isn't even worth our time:

i. The treatment of DDR at the end of the game.
ii. Any criticisms of Totti's contract.

This says two things for me:

i. Ranieri has little use for width (Esposito, Pit, Antunes & Cerci off and Greco on) while he thinks long-limbed Vieira-lookin' motherfuckers (Faty) are useless.

ii. This is a really big squad. (Not that it's necessarily all quality depth.)

"I was substituted in the second half against Siena because I was tired, but that's not unusual as I had not played for a long time and also due to the return journey to Italy after joining up with the national team."

Doesn't look entirely dissimilar to the second half against Siena with a few exceptions. This, for me, gives a bit more balance in the squad, allowing them to do some things going forward more easily. It's certainly better than the shit casserole thrown out from the get go on Sunday (by necessity, of course).

And there's something awfully uncomfortable about writing in JSB to the keeper's spot without even a second's hesitation. It almost feels dirty. Like being French.

In the ten games he's played, including those with Norway, since the beginning of the year on July 30th, John Arne Riise has scored five goals. Yes, 5 in 10 for a mathematical ratio of 1 in 2.

If that's not deserving of a tribute video with an extraordinarily 'curious'
soundtrack, I don't know what is.

This post took a wildly inappropriate turn all of a sudden down some back alley with dudes leather pants and a neon sign which reads The Shipyard, or the Norwegian equivalent. Going to bath in a cocktail of mysterious acids now. Enjoy.