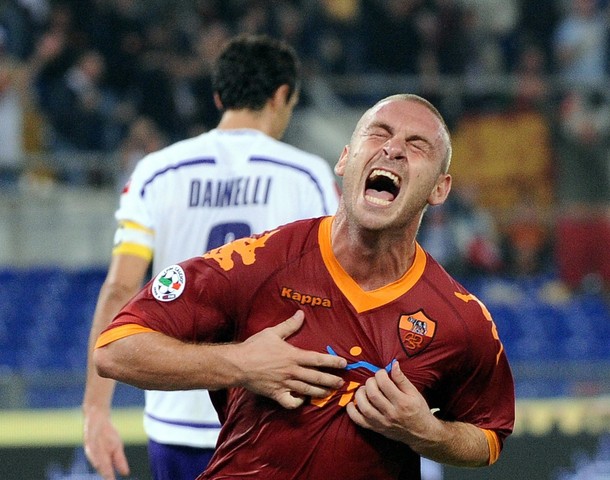 This is the look of a man who was born two millennia too late.

Three games, three outcomes: a yes, a no and a maybe. Wouldn't have it any other way.

I have taken the advice of many and not watched this game. Well, that and I can no longer find it on my hard drive. (So bad it's self-erasing? Could goal.com adopt this quality control technique? How about Zach Braff productions and reality television in general, too?)

In lieu I've watched the highlights whilst ducking behind slightly spread fingers. Through them I've determined...

...nothing. Much like the game itself, and that it'll simply serve as a wake-up call for Fiorentina.

Anyway, there were always likely to be a few bumps along the road. Fortunately they bounced right back, unlike Cluj.

Watching the game now, and this is what I see:

As Ranieri said, things are taking shape and there were some good signs, but by no means a finished product. Particularly not against this carcass that was Fiorentina. But the 4-3-1-2 looks good and the team seems to have found a stable starting lineup of solidified composure. Play smartly, play simply, play composed with a talented roster, and that's a recipe for great success.

Now they just have to do it game-in, game-out.

Back at it later with a liveblog, talking nonsensical bullshit in honor of Mensa's cabooses Zampa & Zenga.

Unless they implode again this evening, don't expect this to change again for a bit.