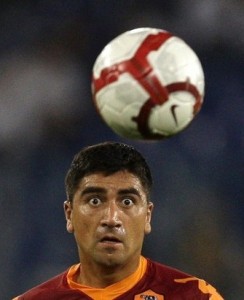 Not the worst result in the world. Both teams probably deserve a point for having to play in such shit conditions. This pitch will be unusable until November.

Totti alone in front of goal but offside. Wouldn't have mattered - he'd need an actualy military cannon to score from 6 yards in front of that goal.

4 minutes added...Mirko on the run.

90' I vote they go for the full three. Nevermind. Juan plays it safe and boots out a corner. Or a throw. Now a corner. And another.

88' Palermo back attacking and Roma now playing a bit safer. And by safer I mean not quite as smart. Yellow on Okaka for throwing the ball. Love the hair, kid.

86' JSB nearly slid outside the box for a red.Okaka down in the box! Penalty!

85' Totti with some space up in the box but just not enough.

Roma have absolutely dominated the last half hour.

82' Still attacking, Palermo still with numbers and water in their favor.

Riise ball deflected just wide for a corner.....no distance after the ball is chipped out of a puddle at the flag.

Totti wins a free kick from about 25 after Kjaer tugs on his arm. Yellow card, and Okaka is coming on for David.

78' I'd like to see a little Okaka for Taddei right niw.

76' Working back down the other end, another Mirko shot, this time on net, this one saved. That's three. Fourth a charm?

73' Palermo finally do something, JSB grabs the cross easily. Palermo adding to their numbers in the back with Blasi.

Oh Mirko. Casually chips a would be goal from the top of the box well high. Great angle on goal there.

The near side pitch is beyond useless now. It takes balls of Riise-esque strength to string two passes between teammates 5 yards apart.

66' Much more possession here and they're pestering chances into the net, they just need to execute one or six.

Yellow on Budan for being an idiot. Long free kick is cleared.

64' Another corner for Roma. Rubinho clears it, but not farr enough and Palermo get a throw near the flag.

Fuck. Ball cleared off the line for a Roma goal. Nearly in the same spot as the second Palermo goal, but without Igor Budan standing in the way.

61' Motta coming on for Cassetti, one would presume.

60' JSB with a save straight on net, fortunately. They haven't looked particularly bad, nor particularly good, this game just, again, looks a product of the pitch.

58' Burdisso gives it up all too easily - nearly his first Doni moment. One is coming. Eventually.

Brighi off, Faty on. Bodies in the midfield. (Plus Brighi was on a short lease.)

Another clusterfuck. Another Palermo goal.

Designed play chipped to Taddei outside the box and his volley whiffs wide. I'm not sure going to the technique of Rodrigo Taddei is your best option under conditions like these. SImplicio offside by a half mile but he still puts the ball in the net for good measure. Atta boy.

Mirko turns two defenders and creates a begging chance but it's booted out for a corner before he can do anything with it. Corner turns into a foul just outsside the box near the goal line. Like that too.

Brighi just offside for another 1v1 with Rubinho. Near chance there, which is matched by Miccolli offside at the other end.

Nocerino skirts a shot wide. Both sides will have ample chances here in the second.

47' Mirko with a bit too much finesse in what will be a power game. Miccoli goes up to his neck in the pond over by that other side, foul called.

46' Palermo nearly 'cleared' it into an onrushing Roman. I think having the other end of the pitch make serve as an advantage here.

One way to sum up this game: this pitch is an absolute fucking disgrace. It's kind of throwing tactics out the window and forcing quick thinking on the fly. You can't prep for that.

And they needed to wake up after that second goal - the halftime whistle hadn't sounded yet. But it'll be interesting to see how the change in halves effects the game. It seemed a lot easier to defend in the Palermo half simply because the box conditions - and those areas around the box - were far, far better. We shall see, but I gather the pitch will be the biggest factor in this outcome.

Holy shit. Right back down the other end with Miccoli. 2-2.

44' Miccoli had about half the goal open and he fired it over. Bullet dodged.

Totti held back and he's pissed so he's given a yellow when he was bolting for a 1v1. Beautiful look by Mirko to release him but Francesco was tugged down. No call.

42' Right back down the other end and they so nearly take the lead again after a loose ball pulls Rubinho out.

Goal Palermo. Budan. Burdisso nearly cleared it but couldn't get any power off the line and knocked it right to Budan.

Brilliant nutmeg by Vuci to keep possession on the goal line and Palermo are forced to clear it for a corner. Foul on Totti in the box after Riise's shot is blocked.

38' Riise just wound up and booted the ball all of two yards. That about describes this pitch perfectly right now. Corner pinkies. Brighi fouled, going the other way.

37' Palermo have had the bulk of the possession for the last 10 or so it seems. Need to get the ball back into their end to keep it from the puddles. (Which are, mind you, beginning to accumulate in both halves.)

Ball curled into the Roma box with a few dangerous moments but it amounts to nothing. I like Okaka here for the second half.

33' This end of the pitch will be an absolute shambles in the second half as the ball continues to lose steam. The Roma attacking half isn't quite as bad right now.

Also, Miccoli is a turd.

32' Roma now taking care of the bulk of fouling, a few balls being whipped into the box but cleared out easily enough.

29' Some serious clusterfucking in the box as the ball just dies in front of Julio Sergio whilst Burdisso is trying to clear. This reminds of the Reggina game last year, without Corradi diving for a pk (yet).

27' Miccoli looking for a 1v1 but just offside. Totti taken down in midfield. The second half should be a yellow card fest for accumulation.

25' There's an area about 30 yards from Roma's goal near the touchline which could now be categorized as a pond.

22' Another foul in midfield, another free kick within range for Roma. Rubinho saves what was a half decent Riise missile. John now hurt after doing the slip n'slide into a kick in the ribs. The carnage list for this game on both sides should be horrifying.

Palermo back down the other end and the pitch is rapidly turning into mud. The ball is suddenly allergic to this whole 'movement' thing.

Brighi's on the scoresheet, but what a fucking backheel setup by who else? The man is a magician.

Back to the game another foul in the midfield. Not entirely unpredictable here today and I suspect they'll go into Catania battered and bruised.

After all that they're showing Lazio - Parma. Fuck that.

Trying to get another stream working - excuse.

12' Vital intervention in the box by someone who looked to be Burdisso, but my frame-by-frame stream blows hard.

Speaking of blowing hard, Taddei whips a cross to Sardinia.

10' Totti's shot squibs wide. This pitch is a war zone.

8' Foul on Brighi. Quick shot from the retake easily saved.

Starting to see some standing water on the pitch. Not good.

7' Someone, Pizarro maybe, just missed threading a ball onto Totti's foot for a poke on goal from the spot. I'll go ahead and blame the rain.

4' The ball doesn't seem to be dying in its tracks on the pitch, unlike the called Samp fixture last year, so that's something at least.

Not too much liberty in getting forward right now.

2' Early shot by Taddei headed up and over by someone - Vuci maybe.

Getting the feeling this is going to be a no go for links today. Right now nothing is up and working, gametime in 5 mins.

Rojadireca says here. Thanks to Ian we have one - however spotty. And the heavens are coming down for sure.

This has all the makings of a tough midfield battle, which means it's nice to see Brighi in there. Given the rainy conditions, I'm fearing a Spalletti-esque postgame injury report.

Perrotta will be an injury miss, and may not even make the bench (update: he hasn't). Mexes will not make it because right now he is cursed by the ponytail mullet attached to his melon. Other than that, Ranieri as usual.

This game looks as though it'll be a difficult stream to find, so if you find one, do share. For now, My P2P & atdhe.