Note On A Friend

Share All sharing options for: Note On A Friend 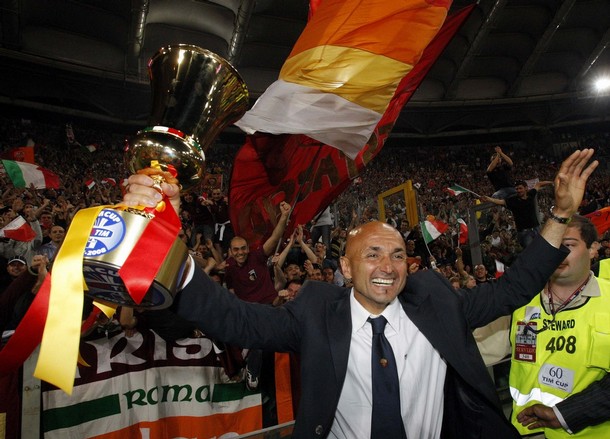 They were glorious, weren't they? My how they could move, read, react. Those darting runs, the quick floor work, the progressive vision - and nearly all of them doing so from the wrong position...or so we thought. Roma wasn't just a group of athletes, they were an opera, a musical, a ballet; a show attended not only for the story, but the performance. If the storyline displeased, all was not lost: they were still artists, and we were the gawking, applauding, grateful spectators. Almost unfair; almost as though we didn't deserve to watch Luciano Spalletti's Roma.

And that will be Luciano Spalletti's legacy: he brought art to an all too often artless game. In a footballing culture branded unaesthetic, on their day they were the toast of Europe. The Dom Perignon of champagne football. Never quite everyday, never quite the finished product, and yet they did so much, won so many big fixtures, gave the fans so many chances to celebrate, came so close and created so many memories. Roma was never supposed to be this good, not after the disarray he walked into, and yet they were. No higher compliment can be paid a coach.

As is life's want, cycles end. A sentiment uttered so often in the last few days it's a wonder a ballad has yet to be penned. From the fans, to the players, to even the weekend's great enemy, Gianluigi Buffon, it's become evident things have changed, cycles ended. The play had gone limp, the passion dried up, the results gone missing and the question begun piling. A plethora of things effectively ending what was a brilliant run by a brilliant tactician, a brilliant coach and a brilliant man.

And perhaps that's what hurts most about this: some wanted Spalletti the coach to go, but no one the man. A genuine class act of character, intelligence and humor throughout his years, he was the epitome of a coach behind the dais. The way he walked away, offering up his wages to a financially strapped club, was perhaps too far for a man who had already given so much, but no more fitting an end could have been scripted.

In a state of mourning, Roma goes on. Football is a sport and sport is fluid; it requires constant change in order remain static. With no one more than Luciano Spalletti to thank for giving them this opportunity to move forward, a testament to those visionary tactics which will define his Roman legacy, Roma must remain fluid.

I've said before there's no one I'd like to see more on the Roman bench than Carlo Ancelotti, but I stand corrected. Someday, when circumstances have changed, when matters have evolved, there's no one I'd like to see on the Roman bench more than Luciano Spalletti. The Grand Imperial Poobah should have nothing less than to hoist the scudetto - his scudetto - wearing his giallorosso, with his fans. As in these years, Luciano Spalletti became one of us.