Chievo: The Stuff That Wheaties Boxes Are Made Of.

Share All sharing options for: Chievo: The Stuff That Wheaties Boxes Are Made Of. 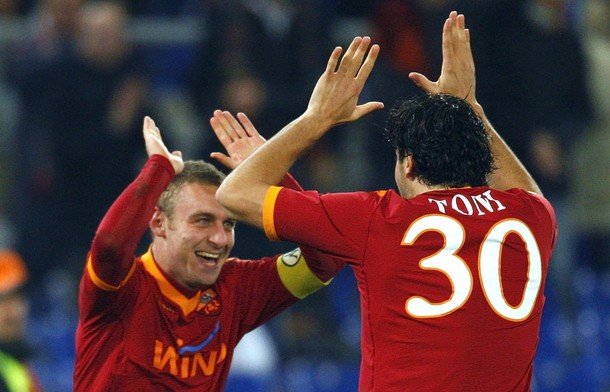 Fairy tales are not written against the likes of house cats, sheepish sheep or flying donkeys. They're written against the likes of lions and tiger and bears (oh my). At least that's supposed to be the way of the universe when spinning right 'round. Yesterday it was anything but, as Roma put in what is easily their greatest performance of the season, one of the best in recent times, and perhaps, if such heights could be achieved against modest Chievo, one which could be dubbed heroic. One to ele...err, ten...they were wonderful and deserve the monsoon of lauditory cliches pelting Rome right now. 78 minutes of unflappable heart, character and will.

Daniele maintained the best player on the pitch was the oafy Olimpico debutant, which is fair but I'd have no qualms were Juan to walk away with that mantelpiece. However, neither were the Man of the Match in the grand scheme that is AS Roma. Those two may have dominated the pitch, but neither were "most valuable". That award goes to a certain Doni, without the slightest hint of sarcasm. (With a slight tip of the hat to Nicolas & Juanus for that clean slicing down the middle.)

Rarely, if ever, in life do people get the opportunity to do something great. Not to be great or achieve greatness, but in one isolated moment rise above reasonable expectation and do that which so few could. This was that moment. This was without a shadow of a doubt the performance of the season, the most important ninety minutes we have seen Roma play since the Champions League swansong of last February.

And when all is said and done, we may look back at two moments:

On the back of crushing disappointment they were given the opportunity to be great, and they passed with a flying color. This team has been cliché fodder for years, but they're always perfectly apt: only falling enabled them to stand so tall.