Coppa: We Are The Future.

Share All sharing options for: Coppa: We Are The Future. 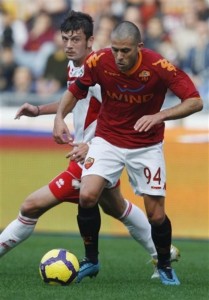 The mercy whistle. A walkthrough of sorts where the result was never in question. Nice little midweek refresher.

Silly technique from Mirko with two quick flicks of the foot to go just high. Triestina afford some space and we finally get to see some dribbling. This game has not played to the strengths of Mirko or Baptista at all (the dribbling in space bit).

Passing clinic leads to a goal kick and a lot of slightly puffed egos.

86' Triestina offering up some free corner practice. How lovely.

Pit's off the ball runs are half decent. Unfortunately - or fortunately - not a soul has tested him defensively. But I can't imagine him to be worse than the Brazilian with Cerci-esque hair on designer steroids.

Cheeky backheel by Baps, who's feeling it all of a sudden, to an onrushing Pit. And yes, I just typed that sentence...how do you feel, Triestina?

Baptigol. And don't think for a second that wasn't entirely due to Espo entering the pitch.

Holy Nostalgia Day - it's Mauro Esposito in the house. Cerci off.

Free kick in Baptista range due to go eighty-five yards high of the goal.

Claudio really needs to give him 90 second cameos in the games which are designated as his "off day". (One on, one off, one on, one off...)

Brilliant backheel by Mirko to Motta, and Menez is well into this game - a nice contrast to Cagliari. Of course he's very much the type of player who does his best work when playing effortlessly, which is lovely for the fans having two enigmatic geniuses in house (Mirko being the other).

71' Still a sub in the bag, still wondering when Cicinho will get his monthly fifteen minute cameo.

Menez gets ball; called for a foul. I mean, he's fucking diabolical defensively, so when the rare occasion comes that he actually makes a tackle, could we please, pretty please, give it to him?

Mirko thieved (poked) by, who else, Brosco. Clearly the next Mexes.

66' This quite suddenly becomes the "don't take your eyes of Brosco" show.

I swear to Jebus this is Triestina's fourth sub, but who cares: here comes Brosco for his Olimpico bow.

Some slick work by Menez & Cerci. Alessio has probably earned a bit more PT, though he still gets a C- for decisions compared to the A+ for effort.

If Triestina tries to chase this it could get real ugly, real soon.

Vucigooooool via, who else, Mr. Supersmooth Menez.

A surge by Pit! And another whipped cross! Get this man a contract!

53' Baptista full of "what's he gonna do?!?!?!". Cuts right, does everything imaginable to put it on his right foot and shoot but is eventually closed down by half the team picture because fetuses not yet born were yelling from the stands what he was about to do.

Cottafave positively bundles Cerci and then yells "I have more hair on my face than you have on your head!".

Doni dribbling between Triestina shirts 35 yards from net. Sometimes, you just have to love him. He knows not what he does.

50' Triestina sporting XI in the box on the corners.

I do honestly wonder if this is a trial of sorts for Pit. They've made no secret of needing a backup for Riise, and finding someone serviceable in house is always preferred.

This is a video game lineup:

Apparently Claudio isn't worried about this whole defensive business - and given how much possession Roma conceded along with Cassetti's defeinding, it really isn't much of a drop.

(And I did call that Menez for Faty move correctly.)

Good job by Triestina inserting the entire team picture plus a couple of stragglers found on the streets of Rome into the box. They were finally broken down and will be again. Nice little test for the boys.

There we go: Brighinhogol. A scrap was bound to fall for someone and it did. They've been absolutely dominating and the first was inevitable, and so shouldn't a second.

I smell a Menez for Faty sub at some point in the second half. Provided, of course, Claudio has decided Yeremy has learned his lesson in the corner.

Julio needs to insert himself in the game a little more - make some of those Sevilla-esque off the ball runs to clean up the scraps near the goal mouth.

Great header by Mirko, even greater clearance off the line.

Burdisso goes for the A-Rod move trying to slap the ball out of the Ukrainian's hand. Stay classy.

Alessio is looking quite good tonight, but then he's always looked good against Serie B/Bulgarian opposition.

Cerci wants a penalty, I'd like him to throw a razor at his face. What is that mess? He looks like an Italian Pigpen.

And on cue, Cassetti hangs Matteo out to dry like a quarterback leading a receiver across the middle. That Brazilian leftback must be loving this. (Double that as Cassetti tries to toss in back-to-back crosses with his left.)

32' Cassetti looks like he's making his calcio debut tonight. Fortunately the hair is making up for every bit of it.

Baptista with a pirouette straight off the Vancouver ice. Too bad he's been shooting as if on ice too.

And you know, selling Aquilani and Panucci really limits the comedic stylings of this team. Perhaps a mid-January move for Craig Bellamy is in order. (John shakes head violently.)

Looking at the armband adorning Doni's arm, I'm just waiting for Christian Panucci to trot out of the tunnel and rip it right off.

25' Triestina's keeper is pulling off a Ukrainian mullet so exquisitely I'd swear he was born in Kiev were his name not Agazzi.

Throw Ricardo Faty on there too - his legs are so long it'd look awkwardly like an oil derrick.

Adding names to the list of those who can't/shouldn't try to pull off the cucchiaio: Matteo Brighi.

Cassetti's getting a little bit clumsy, which usually ends in a flying fury of red. (Broken nose, red card - your choice.)

Then again I might have that type of range against the fifth-bottom in Serie B.

19' Cassetti's side part is easily winning hairstyle of 2010 - at least until Francesco's mane goes full. And perhaps someone in London can show Stefano the ways of achieving flyness.

Cerci goes high with his left foot. And surprisingly, he is the left-footed free kick taker on this team right now bast I can think.

17' David wins a free kick a hair outside the box - a David hair, rather than a Mexes hair.

And the inevitable happens: with Mirko & Baptista dropping deep, Brighi gets forward with the ball and finds...no one beyond him. This'd be a good game for that Toni fellow. (Or Fulham's newest striker.)

David's playing way, way deep. Mirko and Julio drop back so much centrally it's getting cluttered.

11' Faty's lanky frame makes him look positively gigantic next to most on the pitch, particularly in the midfield. He looks like Vieira and Cerci plays like him (the card machine potion).

Lots of sustained possession right now, which is a cue for them to give the ball up. Go me.

7' Stupid two-footed lunge by Cerci, who's quickly ascending into "heart flutter" territory every time he's on the pitch.

Nicely little cutting run by Mirko, but alas it's saved. That ppenalty did not sit well, which is precisely what we wanted to see.

And there it is. Nice chance to show some fightback.

Ridiculous penalty conceded by Cassetti already. Which is kind of good - I was interested to see how they'd react going down a goal early.

There's a lot of shifting across the attacking positions right now. It's a Total Football-esque rotation a la Spalletti.

2' Early corner, early counter by Cerci with some nice pace. Pretty decent for a kid with no knees and no back.

1' Looks like Mirko started out left rather than centrally as assumed.

i. Baptista hit a scorcher and find some goddamn form.
ii. Mauro Esposito get a run - he's been nothing but the consummate professional through both tenures in Rome and damnit he deserves one last hurrah.
iii. Menez give a fuck.
iv. Brosco slap some handcuffs on Mirko. (Even from the bench, where he'll be residing.)
v. Faty stay on his feet.
vi. Cerci finding some lithium.
vii. Claudio tossed and I have no idea why.