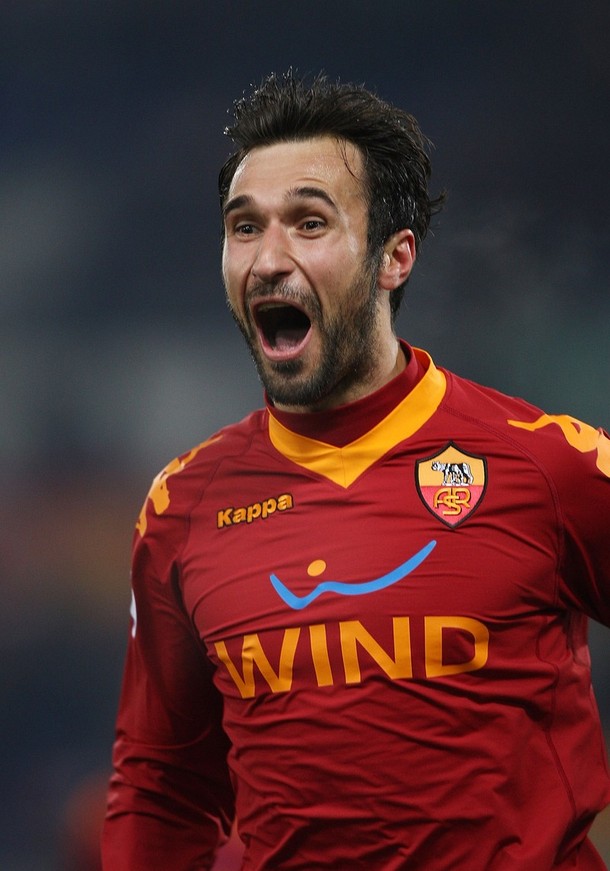 I'd planned on writing a review of sorts, but it would appear I didn't see the game. That I was stuck off in dreamy dreamy land imagining a game which Roma thoroughly dominated from one...err, four...to ninety and in which the result was never, ever in question. But according to the press, I did not see that game. Because Roma survived a "cup scare". Or Triestina nearly pulled off a "shock upset".

It's possible someone in this equation didn't see this game. Given that I'm good and well outnumbered, I'll concede defeat. However, much to your delight, I'll recap the game which played in my head:

Then I found some video which broadcast highlights of my dream. Huh.

If he wasn't going to play, good loan.

Marcio Azevedo: I want him in Rome like I want a terminal case of the hiccups. The comparisons with a homeless man's Cicinho - ironically Cicinho himself at the moment - are begging and the comparisons with Roberto Carlos make me think a blind 12 year old with athlete's foot has been hired for scouting. Sure, there are similar types of players, but to compare quality like Roberto's with this guy is just...yeesh.

And this when highlight videos are supposed to be good.

From everything the plentiful highlight videos displayed, he'd be hacked up like a bad actress in a Hollywood thriller everytime a mediocre Serie A attacker ran at his flank. Obviously this is far from definitive and it's a bit unfair to make any claims based on YouTube, but half the stuff on his videos was an ode to bad defending and worse decision-making. I genuinely have no idea how he'd get a game with Mr. Defensively Oriented running the lineup sheets.

Then again, the strength in defense is not in one, but in eleven...or ten when Doni is/was playing...so who knows. Maybe Prade nailed it on the head the other day: 400k for a loan is a decent gamble on a guy who undoubtedly has a skill set (pace, dribbling, pace, ridiculous hair). Outright? At the moment? That'd seem a bit much, even for only a couple million.

And even if it does happen, I was going to say I'll do something drastic if he gets a game in Rome between now and the summer, but then Christian Wilhelmmson played something like 19 games in a Roma shirt.

Fabio Simplicio: I hate it when he plays against Roma. Such a fucking nuisance.

Which means, obviously, he'd be a welcome addition. The classic "hate him on the other team, love him on yours" type of guy. Really, he's not great, he'll never be great, but he's good, and could provide a bit of the Brazilian-ness hoped for from that Baptista fellow. On a free? Why not.

Zampa has all but placed him in a Roma shirt starting in the summer and his agent has claimed "no contact" all of a few days ago. Kinda reminds of the Juan scenario a few years back when everyone claimed a deal was in place yet his agent continually fought the good fight against logic, reason and fact.

Since Zampa couldn't keep his mouth shut to save the planet, expect an announcement on his future within an undetermined period of time.

Update: I'm beginning to realize I allude to things of which the "casual" Roma fan may have little knowledge, at least compared to the life-sucking Roma addicts who normally patrol these waters (I believe I'm honorary president). And because of this I don't provide the necessary detail as it feels like redundancy since news breaks in the comments section like it's the goddamn BBC. I'll do my best to change that, so here's today's Roman Crib Sheet:

- Roma beat Triestina in the Coppa Italia quarters 3-1 on goals from Birghi, Vucinic & Baptista. The first was a sloppy deflection, the second a smooth tap-in and the third Julio's version of a penalty on 'roids. Or this is what my dreams said.

- Stefano Guberti went on loan to Sampdoria. Officially. No right to buy as far as I know. Sampdoria also has no right to assume the Serie A throne again at any point this season.

- Marcio Azevedo, Brazilian "left back" (that's what they call him), is in Rome and has been for a week or two while Roma and his Brazilian club, which I will now attempt to spell without Wikipedia aid, Atletico Paranaese, hash out details. Roma want a loan of €400k with a €2m buyout or thereabouts while AP would like €2-3m up front. I'd like €2-3m to not break his legs.

- Simplicio, Palermo midfielder, is out of contract at the end of the season and clubs can negotiate with impending free agents 6mos in advance. This would be that period.

- Cicinho is a princessy bag of douche.