Share All sharing options for: Genoa: The Homeless Man's Derby 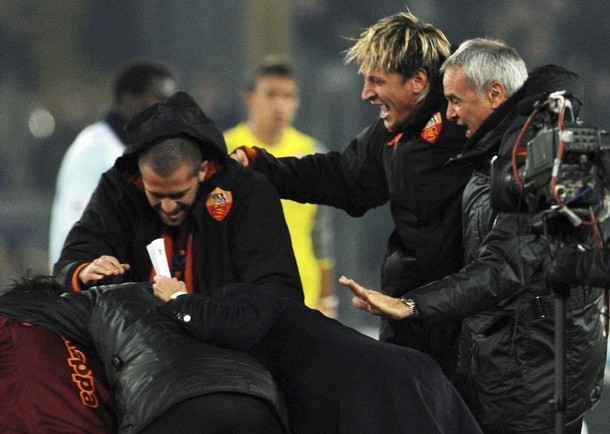 Maybe I'm alone. Maybe it's all in my head. But in some way, this "matchup" is quickly escalating into derby territory. It's physical, it's heated, it's riddled with cards and it includes the dirtiest team in calcio. Were it not for geography and history, Lazio might be in trouble of losing its only two annual games of relevance.

What Roma do have is a very explosive recent history. Both games at the Marassi played out similarly: Genoa with the points, Roma seething at what a polite man would call "bullshit" refereeing. If there's any justice in the world, the Olimpico fixture will play out as last year's: Genoa coming in playing its favored brand of elbow throwin', two-footed lungin', sundial timin' football, and Roma wiping the floor with their tattered carcasses.

Unfortunately, this is not that same Roma. And yet, perhaps it's just as fortunate, since this isn't quite the same Roma as the one which opened the season. In fact, the two teams could hardly be more different: Spalletti's Roma conceded three to Genoa in 34 minutes; Ranieri's Roma has conceded three total in the last six league games.

Until now we haven't been able to compare Spalletti & Ranieri directly. And to a point we still can't, but there's a certain degree of confidence heading into this match when run'n'gun has been replaced by a brick wall at the back. This is the first chance for the new Roma to put the old Roma to bed.

By doing exactly what old Roma did one year ago, simply by different methods.