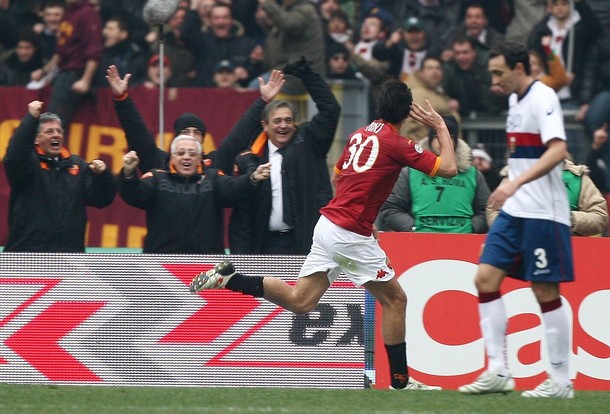 This is the first chance for the new Roma to put the old Roma to bed...By doing exactly what old Roma did one year ago, simply by different methods.

This game, much like Chievo and Triestina, was never that. It was never much of a game, never in question, precisely because it, again much like Chievo and Triestina, was in sharp contrast to Cagliari. A consistent ninety-plus; a solidified ninety-plus; a superior ninety-plus. Two great things have happened to Roma in the new year: Luca Toni & Cagliari. One a look to the future - albeit the relatively short-term future - and one a reminder to keep yourself in the present. Backward steps are fine because backward steps promote evolution and evolution is a mighty fine thing.

i. If Genoa makes the Champions League, I will eat my shorts...or something equally inedible.

While this was a nice game, a solid, emphatic victory and yet another notch on the belt, Genoa is not a great team. They're not even very good, and they're piss poor away from home.

That's kind of all there is to say about that.

ii. Spalletti will not be crying in Russia.

There was no chance to get Luca Toni in the summer - this one, the one previous or the one even before that. There was never a chance to get a striker the quality of Luca Toni without hiring Danny Ocean. Luciano knows this, and while he may bemoan the timing, there's no looking back on the hypothetical here.

iii. This was not about a prima punta.

It's easy to put one and one together to say that a prima punta shows in Rome, finding himself on the end of balls in the box, and thus concluding this is what's been lacking all along. A little too easy, and unfair at that. Sure, the prima punta is a help, and no small one, but to put Luca in that category is a little bit ignorant. He is, inarguably, one of the best strikers in the world. He's not just a "prima punta"; he is the prima punta.

This is not about a prima punta, about Spalletti or about a missed chance at the mecato - this is about Luca Toni. Just because you wanted beef doesn't mean ground chuck hits the palette quite the same as filet mignon. He's just that good.

And finally, one "myth" which is now confirmed as anything but:

No Francesco, no Daniele...no problem.